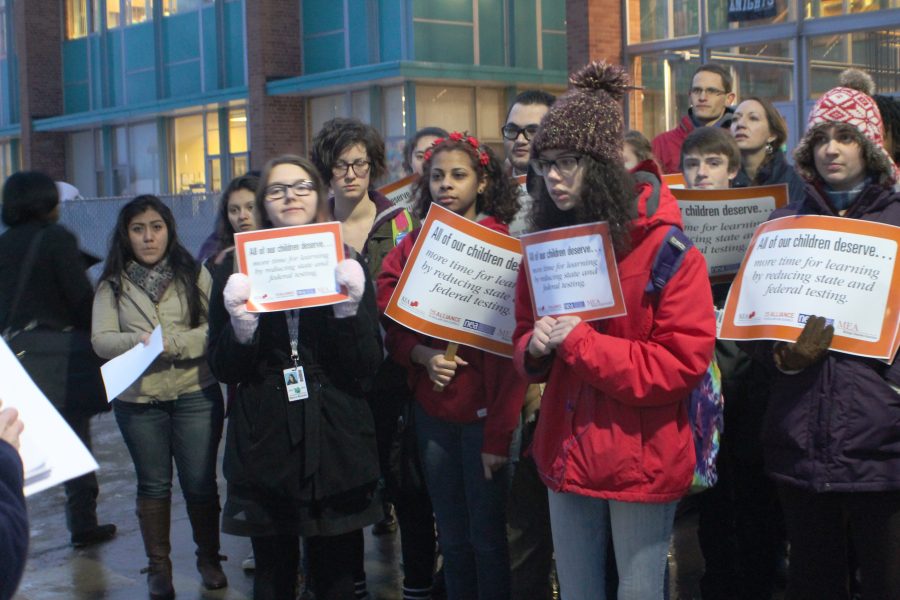 A day in the life of an average American high school student: wake up, eat breakfast, and go to school: another day, prepping towards another big test. The annual ritual of filling in an endless sea of bubbles with a dull pencil is a feeling many students know too well. The mere sound of a three or four letter test acronym makes students cringe and groan: SAT, ACT, M-STEP, MEAP.
However, thanks to the recent change to the No Child Left Behind Act, our anxieties over standardized testing may soon be over. The Elementary and Secondary Education Act (ESSA) now leaves many decisions on federal and state testing to the individual states, and it is clear that the Loy Norrix staff and student body are ready to see a change for the better.
From around 6:50 to 7:20 this morning, approximately 20 teachers, 15 students, 2 school board members, 2 support staff, 2 administrators and the KPS Union President conducted a “walk-in” outside the tower to show their support for a reduction of standardized tests. Due to the growing number of supporters as the walk-in progressed, it was easy to see just how passionate Loy Norrix was about this issue.
Kalamazoo Public Schools was not the only district involved in this walk-in. Nationwide, over 9 thousand public school systems participated in the walk-in, uniting to prove the importance of a more curricular, less testing-based national education.
English Department Head Brianna English, one of the teachers who attended the walk-in, feels that standardized tests don’t accurately show a student’s growth.
“Students are expected to show everything they’ve learned in one day, which is unrealistic,” said English. “We’re forced to take time away from our curriculum to do test prep instead of teaching critical thinking and more important skills. Teachers suddenly have to teach kids how to do well on a test they haven’t even done themselves.”
It is clear that many teachers find issues with standardized testing, but standardized testing is also an issue for the district. The further funding of a school district can sometimes be based solely on how their students perform on these state-wide, or even nation-wide tests.
Amanda Miller, Union President of the KPS district, feels that scores should not be the deciding factor on a district’s performance.
Miller said that a reduction in standardized tests will benefit students. “We can teach the whole child! We can teach things through discovery and real learning. We are not trying to raise people who can fill in a bubble, we want to raise people who can think.”
The reduction of these tests will also teach more real-world skills that students require before college, as more time is taken out of basic curriculum for each test. KPS school board member Ken Greschak commented, “If we have more time in the classroom, there will be more time for learning.”
Teachers, administrators and school employees are not the only ones with this point of view; in fact, many students feel the same way, wishing they had more practical knowledge before college, including senior Joanna Yiu.
“[Testing is] all that the schools teach to, we don’t learn functional, real things,” said Yiu. “I really think [reducing testing] would allow more well-rounded students [who] could take more extracurriculars. Overall we would have smarter students.”
With the change of testing policy from NCLB to ESSA, there is hope for the student bored of filling in bubbles, the teacher frustrated with teaching test prep, and the district employee tired of letting bad test scores dictate the success of their schools. With ESSA, education could get the boost it needs and give students the education they deserve.