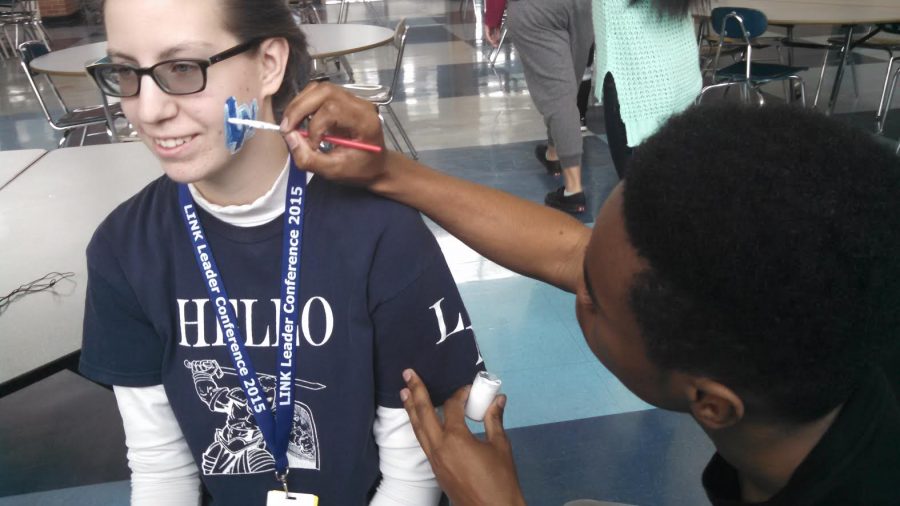 Dressed in blue and white, the student body chants the fight song as the band plays along. Students go head-to-head in small competitions like lip syncing and crab soccer, trying to get the most points for their class towards winning the spirit jug. The entire week has led up to this pep rally to see which class will win. Unfortunately, it hasn’t been the entire week. It is only Thursday and you will have to wake up early and drag yourself to school one more day before you can finally sleep-in and relax.
Loy Norrix puts on pep assemblies twice a year to get students excited about sports and school spirit. The rallies occur in the fall and in the winter to finish Spirit Weeks. These days also happen to be the days of Homecoming and the Homecoming football game, and Winterfest and the Winterfest basketball game, respectively.
Usually the pep assemblies are on Friday so that the assembly, game and dance are all on the same day. However, this Winterfest week the pep assembly was on Thursday, February 11th, and the basketball game was on Friday. Many students did not like this change and wanted to know why it was this way.
“I don’t like the pep assembly being on Thursday because we usually have it on important game days, and it’s a good way to end the week,” said junior Walter Walker.
Many students felt this way and thought that the assembly should be the same day as the game.
“Having it on Thursdays is terrible and makes me not want to come to school on Friday,” said junior Joshua Wild.
Others don’t think it matters what day the assembly is on as long as they have an opportunity to celebrate their school spirit.
“I would rather have it on Friday, but I think it’s fine as long as we have an assembly,” said senior Brooke Washington.
There were a lot of questions floating around as to why the pep assembly was held on Thursdays so Athletic Director Andrew Laboe broke it down.
“Hanging the posters [for the poster competition] requires the lift, it requires our custodians, and requires the entire day Friday from 7:30 to 4:00. There is always an event on Thursday in the gym where we have to be out by 2:30,” said Laboe.
In the fall, during football season, there is no poster contest so the assembly can be held on Friday. However in the winter, for basketball season, there isn’t enough time on Thursday to hang all of the posters. Therefore custodians and students spend the entire day Friday in the gym hanging the posters.
It has been this way every year since Laboe has been our Athletic Director and even before he started working here twelve years ago. Many students don’t know of the work being put in for the poster contest, and the game on Friday.
When told about the reasoning behind the change in day, students tried coming up with a few solutions.
“I think they could try to hang the posters on Wednesday instead so we could have the posters up for the pep assembly and the game on Friday,” said sophomore Ava Stoops.
Students thought they could hang them earlier in the week, and others thought that if the problem was the poster contest they would rather not have it.
“Have them hang the posters earlier, like on Monday, so they can be up all week and have the pep assembly on Friday,” agreed junior Nicholas Stamper.
There are many possible solutions for this apparent issue in the student body. If you have any suggestions you can show them to Mr.Laboe in the Athletic office, and you can vote down below to voice your opinion.
[polldaddy poll=9336789]
Delete Image
Align Left
Align Center
Align Right
Align Left
Align Center
Delete Heading