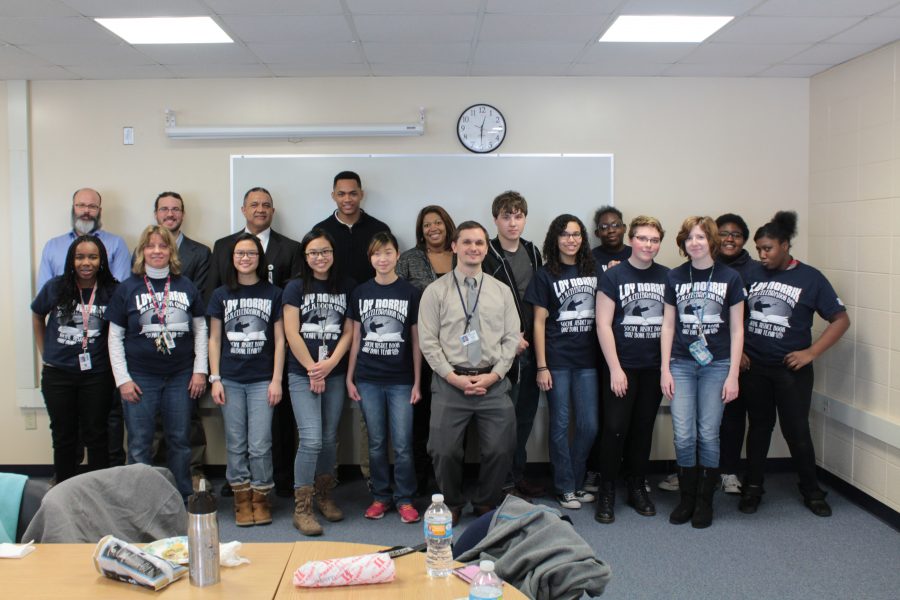 Every year there is a quiz bowl in honor of Martin Luther King Day. For the last two years, the Loy Norrix team has won the district championship. Let’s meet the 2016 MLK Quiz Bowl team and the students of the month for February:
Zhi Tian – 10th grade,
Tihnae Bennett – 10th grade,
Ferren Olmsted – 10th grade,
Naomi Verne – 10th grade,
Mey Wong – 10th grade,
Fletcher Robbins – 10th grade,
Elizabeth Gbogi – 11th grade,
Amyah Walker – 11th grade,
Quincy Page – 12th grade,
Zhi Nee Wee – 12th grade,
Simeon Smith – 12th grade,
Felicie Jones – 12th grade.
Sveri May – team coach.
Sveri May, the MLK Quiz Bowl coach, was very enthused to talk about the team.
“They are just such an amazing group of kids,” said May, “They put in so much hard work to get to where they are. I gave them the material in early October and told them that they needed to have it all read by the end of Thanksgiving Break. You know what, they did it.”
May went on to talk about how she also studied over break.
“I went down to Colorado to see my family for Thanksgiving, and they kept begging me and begging me to put my books down. How could I expect my students to hold up a deadline if I couldn’t do it myself? So I would put my book down, but as soon as they went off to do something, I was off to the races again,” said May.
Reading the material was just the beginning for the students involved in the Quiz Bowl. After break, it was time for practice.
“We practiced 2 times a week in the beginning.  At the end, we were meeting 3 times a week. I wanted to make sure that these kids won, after all the hard work that they did. When we got to the competition, we knew everything that we needed to know,” said May, “I remember on the way to districts at Linden Grove we were joking around, quizzing each other over super small things that we didn’t think would be questions, but one of them did end up being a question. And I’ll tell you what, those kids knew it and we’re proud.”
There are a two students on the team that have actually won two times now. Felicie Jones and Tihnae Bennett.
There were also a number of staff members that went to show their support for the team;
John Krieder, Patrick Greeley, Erin Middleton, and Ryan Allen all attended the Quiz Bowl.
When asked why he went to the quiz bowl, Greeley had this to say, “I feel like they are a very under recognized aspect of our school. I wanted to go out and show my support, not just for Loy Norrix, but for the team as well.”
Inspiring stories like that could be heard from others as well.
“I feel like it is important to go and show support for our smallest school functions. Plus it was great to see them win,” said Krieder.
So is it something special here at Loy Norrix that gives us a great team, or is it great coaching? Maybe it’s a little bit of both. Whatever it is though, Loy Norrix is the reigning MLK Quiz Bowl champion, and we are proud.
Delete Image
Align Left
Align Center
Align Right
Align Left
Align Center
Delete Heading