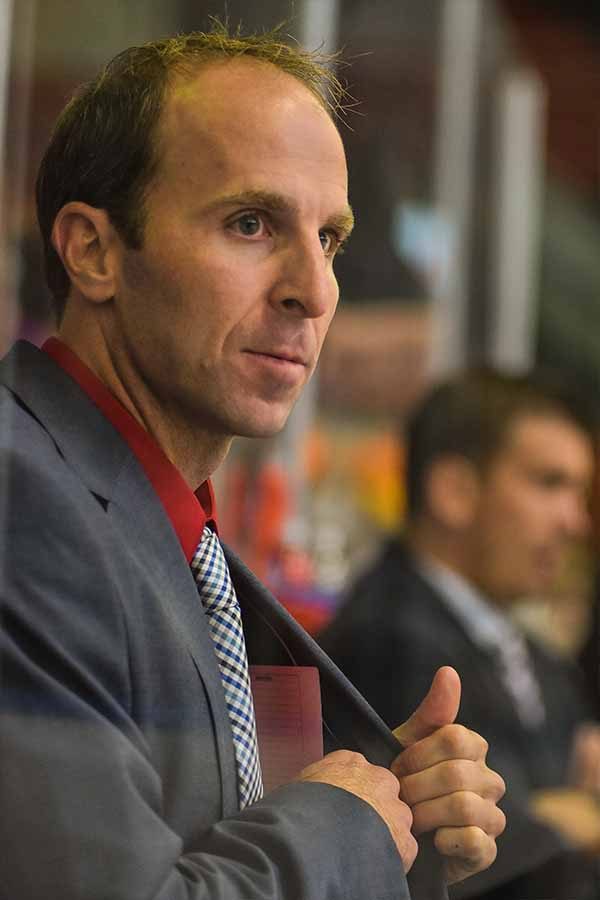 Sam Ftorek in the players box coaching the Team. This is his first season as assistant coach. Photo Credit / John Gilroy Photography

The Kalamazoo Wings hockey team has been playing hockey since 1974 at Wings Event Center, previously known as Wings Stadium. The team has come a long way since then. In the past five years, they have had over 20 thousand people in attendance (each season spanning between two and three thousand in attendance). In 2006, while the team was a part of the UHL (United Hockey League), they won the Colonial Cup.
Six years ago, the Kalamazoo Wings team welcomed player Sam Ftorek onto the team as a forward, and he then moved up to defensemen. Ftorek has been playing professional hockey for 17 years.
Last June, Ftorek agreed to take the position of assistant coach, working with head coach Nick Bootland. With his new position as assistant coach, he will be with the Kalamazoo Wings in the players box helping lead the team to win their games.
After working under head coach Nick Bootlands guidance, the two have gotten to know each other very well, which only strengthens their working relationship.
Ftorek said, “I believe working with Nick [Bootland] as the assistant coach, we will continue to make a great tandem. We get along really well, love hockey, and desire the best from and for our players. It will be different looking down the bench to him, not over my shoulder, but we will continue to have a great working relationship.”
Working his way up the ladder, from playing forward up to defensemen, after 17 years he finally got the coaching position that he has wanted.
“I told my wife when we first met that I was going to play hockey for a living. She asked what I was going to do after that, and I told her I was going to be a coach,” said Ftorek. “So I played as long as I could and then things worked out that I could stay in Kalamazoo and jump on board as the assistant coach,” said Ftorek.
Every hockey player has their own inspirations and role models, whether it’s an Olympic player or someone close to home.
“My father was my role model growing up. He won a silver medal in the 1972 Olympic games in Sapporo, Japan. He then went on to play in the  National Hockey League (NHL) and World Hockey Association (WHA). He taught me all about the game and showed me how much fun you could have playing, if you put in the hard work behind the scenes,” said Ftorek.
However, just having an interest in playing simply isn’t enough. As Ftorek’s father said, you have to put in hard work. That means long practice hours or coming home late from an evening game (these can span from three to four hours, often continuing until ten or eleven at night).
“As a player, game days were full of little things that we did to get ready for a 7:30 p.m. start of work. We would be at the rink at 9 a.m. on the ice at 10 a.m. for a quick practice. After practice stretch cool down and head home. I would have a snack, hang with the kids then take a nap. Wake up at 3:30 p.m. eat a bowl of pasta,” Ftorek continued, “[I would] Get dressed in a suit have a big bowl of ice cream and head to the rink. I’d arrive around 5 p.m. and start getting mentally prepared for the game. It is a long day, but can be so much fun.”
Sam Ftorek has three children who often stand by the players’ tunnel at the beginning and end of each game period waiting to see their father come off the ice. One can’t help but think that it is such a precious sight, watching them wait for their father with their mother sitting in the stands, keeping an eye on them with help of the dedicated season attendees.
“My best moments as a player were the last few seasons, being able to see my kids standing by the door when I was stepping on and off the ice.” Ftorek continued, “They kept things in perspective when things were not going the way that I may not have wanted. They were always happy to see me, win or lose, and ready to give me a healing hug on the bad nights. Hopefully giving them great memories of family time at the rink were my happiest moments.”
As of March 8, 2016, the teams season standings are at 26 wins and 25 losses out of a total of 51 games. There are currently 15 games scheduled, five of them scheduled to play at the Wings Event Center for the rest of the 2015-2016 game season throughout the rest of March and beginning of April.