Loy Norrix Softball Commits Their Outfield to the Next Level 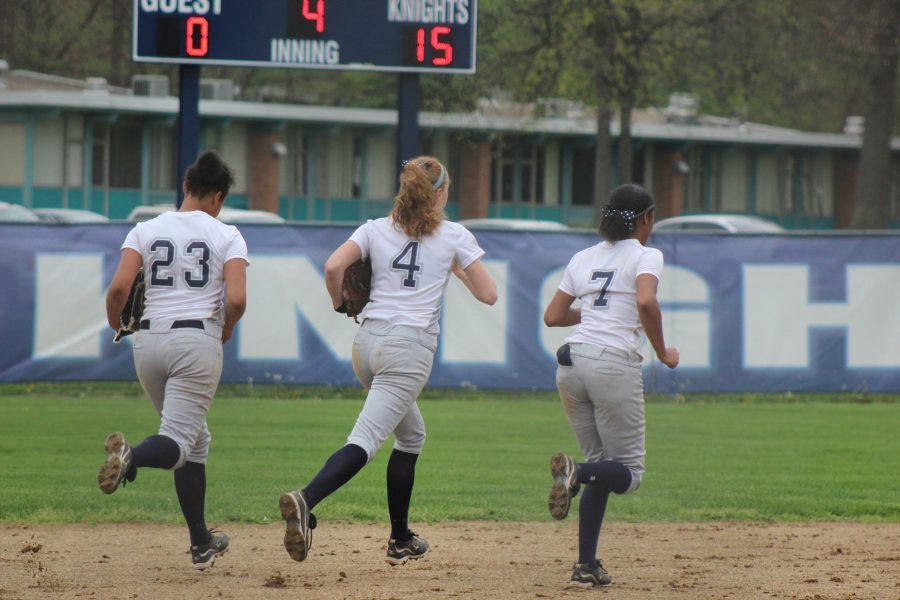 The three Loy Norrix outfielders run out to their positions in a game last spring. Many college coaches have had an eye on the three lady Knights. From Left to Right: #23 Keisha Harris, #4 Megan Lohner, #7 Maia Greer. Photo Credit / Kristi Johnson

Three commitments, over a .400 batting average, and genuinely feared in the SMAC conference, those are just a few ways to define the Lady Knights outfield of Loy Norrix, made up of senior Megan Lohner, senior Keisha Harris, and senior Maia Greer. Lohner is committed to the University of Michigan Dearborn, Harris and Greer to Olivet College.
The three Loy Norrix outfielders have played with or against each other since the age of nine. Between the three of them, Harris, Greer, and Lohner, have all played four years of varsity and have carried over a .400 batting average.They are rumored to be “feared” by most coaches in the area.
“We are confident we will field the best outfield in West Michigan, maybe the state. No matter where our competition hits the ball, there will be a very good outfielder on it fast. These girls are lightning, waiting to be unleashed,” said Ray Lohner, who has been the varsity softball coach for the past two seasons, and has just recently stepped down to a manager position.
A true combination of threat is what these three players bring to the Loy Norrix softball team. Harris with the power, Greer with speed, and Lohner with contact and consistency.
“Kiesha hits the ball like a hammer. Her hands, when she hits, is the fastest I’ve ever seen. Megan is a true triple threat. Whatever you try, she will get on base, and when you see [Maia] run the bases, you’re not surprised college coaches take notice,” said Lohner.
The three commits came together and scored over forty percent of Loy Norrix’s runs last season and plan to lead the team to another successful season in their last chance as high school softball players.
Delete Image
Align Left
Align Center
Align Right
Align Left
Align Center
Delete Heading