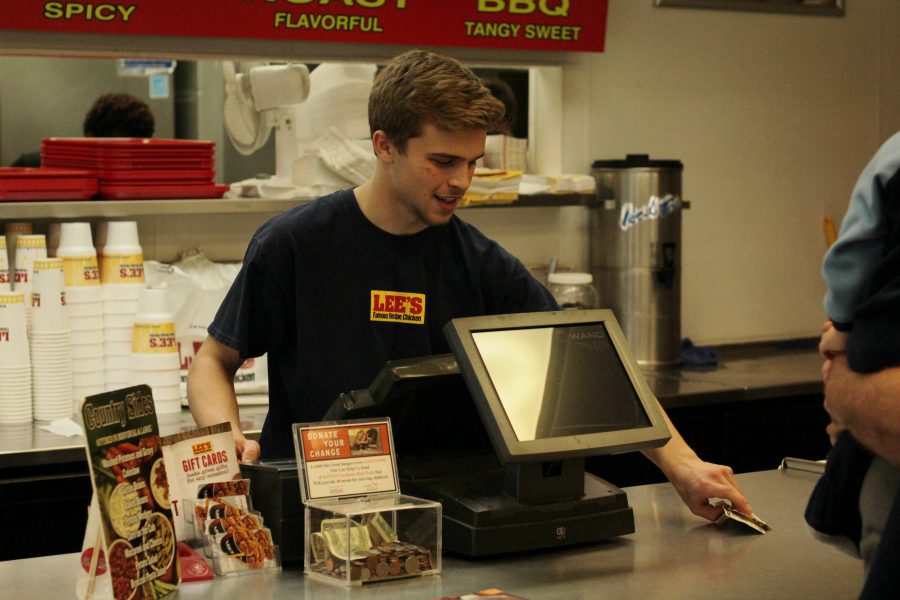 Money in your pocket and the sense of growing out of being a student to becoming an adult is what after school jobs are all about. As high schoolers, most of our responsibilities revolve around our education. One in four high school students 16 years and older eventually take on the responsibility of a part-time job, according to the U.S. Census. There are plenty reasons students get jobs and luckily, there are a lot of local places that hire teens. Students with jobs have less control over their free time and tend to be more organized.
Drue Burkey, a 17 year old junior at Loy Norrix, has worked as a grocery bagger for over 10 months at Harding’s Friendly Market on West Main in Kalamazoo. Burkey, having a high school job since sophomore year knows the ropes.
“Having a job, I spend my free time more wisely and I’m better at planning stuff. Having free time makes me appreciate it more. Once you get a job you don’t have as much free time,” said Burkey.
Austin Root, also a 16 year old junior at Loy Norrix, works at Lee’s Famous Chicken because of how close it is to where he lives. Root has a different perspective of his job since he’s only been working for about a month. This is Austin’s first job and he works around 10 to 20 hours per week.
“Starting my first job was overwhelming at times, but it’s pretty easy to catch on and they’re lenient. They know you have to learn at first. My first day was pretty overwhelming because they show you everything quickly, but it’s easy to adapt,” said Root.
Starting a first job has its pros and cons. After being employed for a certain amount of time, it makes an impact. It can affect a person’s personal and school life. Root got a job for the same reason as many, independence and extra cash. Along with advantages of working as a high school student, there comes sacrifice.
“Having a job negatively affects my schooling. I don’t have time to do homework, and when I work late, it makes me tired at school the next day,” said Root.
Burkey works on average 16 hours per week, that’s close to a full day of his free time. With that in mind, students with jobs must balance school with work which can be challenging for those with more demanding academic commitments.
Although a job may take up some free time, it can still help with school in many ways.
“Having a job positively affects my schooling because it gives [me a] good work ethic,” said Burkey.
There are many other reasons having a job can positively affect high schoolers. It can teach responsibility as well as time management explained Burkey, two important characteristics of being successful in high school.
Students get jobs for different reasons, but just like Root for a majority of students, it’s for the extra cash.
“I have a job so I can learn to be more independent and along with it comes my car, more freedom and money so I can pay for gas,” said Burkey.
When you’re comfortable in your routine schedule, finding a job can be a hard new experience. Students often go job hunting together in hopes of working with their friends to make the job less awkward and have more support. When first becoming an employee, it will take time to adjust and get into the routine of having a job.
“I chose Harding’s because I knew the manager. My first day was really awkward because I didn’t know anyone else, and I hadn’t ever had a job before,” said Burkey.
Just like starting anything new, becoming familiar with a  job takes time even if it isn’t someone’s first job. All jobs have their own advantages and perks that an employee should take into consideration when choosing where to work. Most jobs offer employee discounts; for example, a fast food restaurant may offer employees free food as an incentive and working for a toy store can offer employee discounts. Grocery store baggers and restaurant servers get tips from their customers.
“I once got a 10 dollar tip for a carry out,” said Burkey.
All employees look forward to the incentives from jobs, but other things can make a job a better experience for an employee. Sometimes just changing things up may make the job more appealing for them.
When Root originally started working he was on dish duty and cooking food. He was moved because his bosses thought he would be better up front as a cashier, his current position.
“The best thing that happened to me was when I got put to a different position and didn’t have to cook food or do dishes anymore, i looked more like an upfront person that’s basically what they,” said Root.
He is now working on the register. Root is new to working but has an open mind about his job. Although he only sees it as temporary employment as most high school jobs are.
“Keep a really positive mindset when you’re working, it’ll help you in the long run,” said Root.
There are many considerations and changes to think about when deciding if you want to get a job or not. If you’re not yet eligible for a job, there’s a lot to plan and think about.
“Get a job, the money’s worth it,” said Burkey.
Delete Image
Align Left
Align Center
Align Right
Align Left
Align Center
Delete Heading