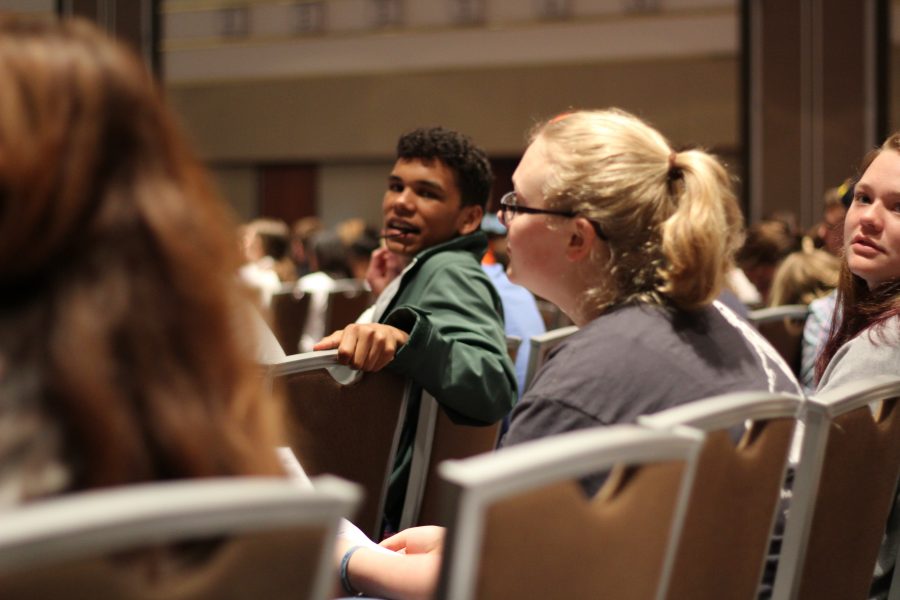 It’s 7:30 in the morning on April 21st. 30 high school students drag themselves onto a charter bus headed for Lansing. Sleep-deprived and caffeine-infused, some will spend the day listening to speakers discuss journalism, others will show off their skills in on-site writing contests, but all hope that their newspaper will go home with the coveted Spartan Award of Excellence. The students file into seats of the main auditorium at the Lansing Center and anxiously await for the event to start. A speaker steps up to the podium and announces the start of the Michigan Interscholastic Press Association’s (MIPA) 2016 Spring Awards.
With 43 hundred submissions and 3 thousand certificates printed, MIPA evaluates high school and middle school newspapers and their websites, as well as school yearbooks statewide. Of the various awards granted on April 21, Loy Norrix’s own Knight Life News received over 20 awards, including ratings of bronze for the website and silver for the print edition.
In years past, Knight Life has received Spartan awards, but Audra Penny, Knight Life’s Editor-in-Chief, believes that no matter the score, progress only motivates the staff to do better.
“I believe that overall [Knight Life’s] teamwork has been outstanding,” said Penny. “I know there’s no award for that, but it means a lot for me as an editor to see everyone work together and get along together with almost minimal problems.”
For most Knight Life staff, the MIPA awards are the ultimate source for knowing how to improve oneself as a writer.
“Because I’ve been in journalism for the past four years, MIPA is extremely valuable and important to me,” said Penny. “It allows students to reflect on their work, see their work published, awarded and see how far their work has come through the past few years.”
For some of the reporters on the newspaper, like Web Editor-in-Chief Carsten Strand, the Knight Life class itself has given them the true skills they will need for future endeavors in the world of journalism.
“I’m going to major in broadcast journalism,” said Strand. “I’ve got to take a lot of classes on the spreading of media, mostly through the internet, and being Web Editor-in-Chief has helped me do that.”
Strand has also learned one of the most important concepts of journalism that plays a major role in everyday reporting: responsibility.
“[I now know] that what I’m doing will affect people,” said Strand. “It’s going to affect someone in some way, whether positively or negatively.”
Junior Maggie Lager has only recently joined Knight Life, and received her first award in journalism at MIPA Awards this year. Lager believes that she has gained some important experience from being on the newspaper, even though she will be unable to participate in it next year.
“I’m really happy that my article got an award and that it got some recognition because [it covers] something that I think everyone should be informed about,” said Lager.
Lager also felt that the recognition Knight Life received at the spring awards was reflective of the work the newspaper put in this past year.
“Knight Life really helps me to be able to work in a group,” said Lager. “It’s not as much of a class as it is a group responsibility. I know that the newspaper will continue to do well.”
Both Knight Life and MIPA provide an outlet for student writers to showcase their articles, photography, design and editing skills in a professional setting, which allows a sense of credibility that would not otherwise be granted in many other publications. For every issue there are high expectations, which ensures that high quality work is published and shown in the recognition received this year at the MIPA Spring Awards.
Here are the Knight Life winners and the awards they received:
Cindy Bravo
Second Place in Front Page/Newspaper Style
Clayton Barker
Third Place in Online Breaking News
Honorable Mention in News/Feature Photo
Carsten Strand
Third Place in Online Breaking News
Third Place in Action Photo
Third Place in Sports Action Photo
First Place in Photo Story
Ruby Hensley
Honorable Mention in Online Breaking News
Honorable Mention in News/Feature Photo
Max Offerman
Honorable Mention in News Analysis
Ben Miller
Honorable Mention in Editorial
Christian Baker
Honorable Mention in Feature Photo
Honorable Mention in Sports Feature Photo
Maggie Lager
Honorable Mention in Multiplatform Media
Taylor Krupianik
Honorable Mention in Comic Strip
Jordan Brown
Honorable Mention in Photo Story
Jaidyn Kynaston
Second Place in Diversity Coverage News
Knight Life Staff
First Place for Front Page in Student Choice Awards
Here are the winners of the on-site writing contests at the MIPA Spring 2016 Awards:
Zach Mason
Third Place in News Writing
Jake Heasley and Carsten Strand
Honorable Mention in Editorial Writing