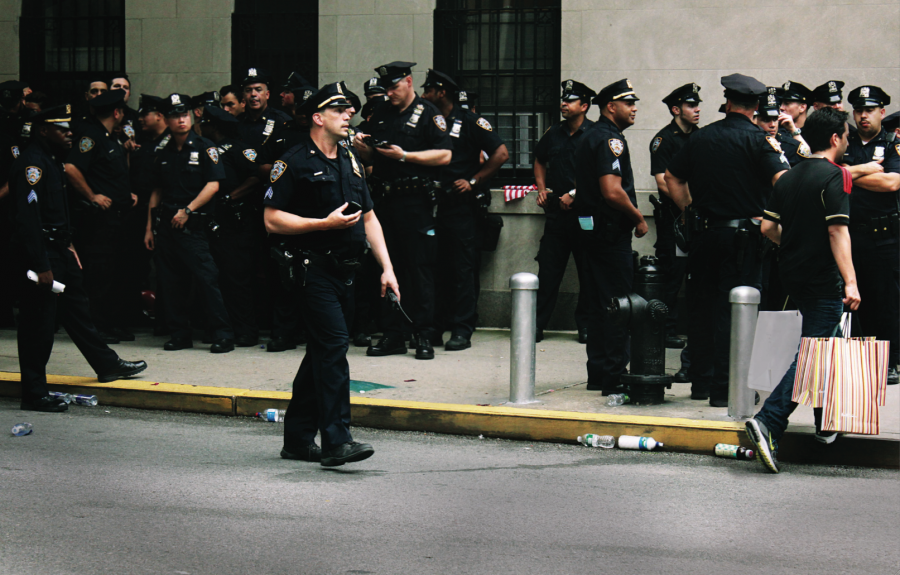 Police staked out on Wall Street. Photo by Ruby Tanja

Occupy Wall street is a leaderless movement without clear demands but has still accomplished what it set out to do—shed light on corporate corruption. The Occupy Wall Street movement, and hundreds of other protests around the nation sparked by solidarity, are changing the way America sees itself and its distribution of power.

There are basically two sides of the OWS coin; the critics, who believe in taking personal responsibility for lack of a job, acquisition of debt, and staying positive, and those who want to shed light on the enormous disparity of wealth in America and the statistically believable helplessness that comes with the turf. Those in support of OWS are generally liberal democratic, and those in opposition are overwhelmingly republican conservatives.

On September 17th, the Occupy Wall street protest began with a group of about 1,000 people. September 17th marked the first major news coverage when three young women peacefully protesting were maced directly in their faces by a NYPD officer and denied medical care during their stint in jail. That same day, over 80 protesters were arrested because they lacked a permit and the movement was brought to national attention.

On October 1st, around 700 protesters were quarantined on the Brooklyn Bridge and arrested en masse. By the third of October, sister marches had spread nationwide, including Boston, Minneapolis, Hawaii, Memphis, and Portland. Two days later, nearly 40 organizations had joined the roughly twenty-thousand protesters marching through NYC’s financial district.

Again, police brutality was an issue, as videos of NYPD officers beating protesters and spraying mace into crowds went viral. The protest is expected to run into mid November—a goal of 60 days protesting in America.

On a sunny day in late September, Loy Norrix senior Ruby Tanja found herself amidst the blossoming protest during a college visit in the NYC area. Walking along Wall Street with two friends, she came face to face with a mob of police officers.

“The mass of police seemed to be exponentially breeding. They looked like children waiting outside in an orderly clump for a fire drill to end,” said Tanja.

The NYPD officers were not waiting for a drill to end, but for orders to silence something that would become very real.

Tanja said, at the time she assumed that “things like this must happen all the time in NYC.”

Little did she know, the protest she was witnessing would spread nationally and internationally within the week.

Protesters have been heavily criticized for being a body without a brain—a mass movement without a leader or clearly established demands. This is because of the symbolic nature of the movement, meant to draw mass attention to an issue that has gotten less than its share in the past.

Protestors on Wall Street and other solidarity protests around the nation are marching against all kinds of corporate corruption. Union busting, tax breaks for the ultra-rich, the rampant use of foreclosure by banks are just a few on the long roster of corporate injustices as seen by the OWS demonstrators. But to summarize most of the angst, the protesters are fed up with the top tier of the U.S. population owning and controlling more than 80 percent of our nation’s wealth while millions go without health insurance and pensions.

In an interview with the Wall Street Journal, Republican presidential candidate Herman Cain said, “Don’t blame Wall Street, don’t blame the big banks, if you don’t have a job and you’re not rich, blame yourself!”

A recent “Time” Magazine survey showed that 54 percent of Americans have a favorable impression of the protests, and less than 25 percent have a negative impression—the qualms of the protesters are registering with most Americans.

Many Americans who don’t mind the unequal distribution of wealth still find a reason to take part in the protests. Many are acting in solidarity with the protests because of police brutality against innocent protesters, insensitive comments from politicians, and proven censorship of OWS coverage by national and international news organizations owned by the same corporations being protested.

Surprisingly, there have not been any major boycotts of corporate products. Protesters still use their Apple iPhones, slurp Starbucks Frappuccinos to stay energized, and sleep in Patagonia and Northface sleeping bags. The problem with refusing to use corporately produced products is that it is nearly impossible to find an alternative.