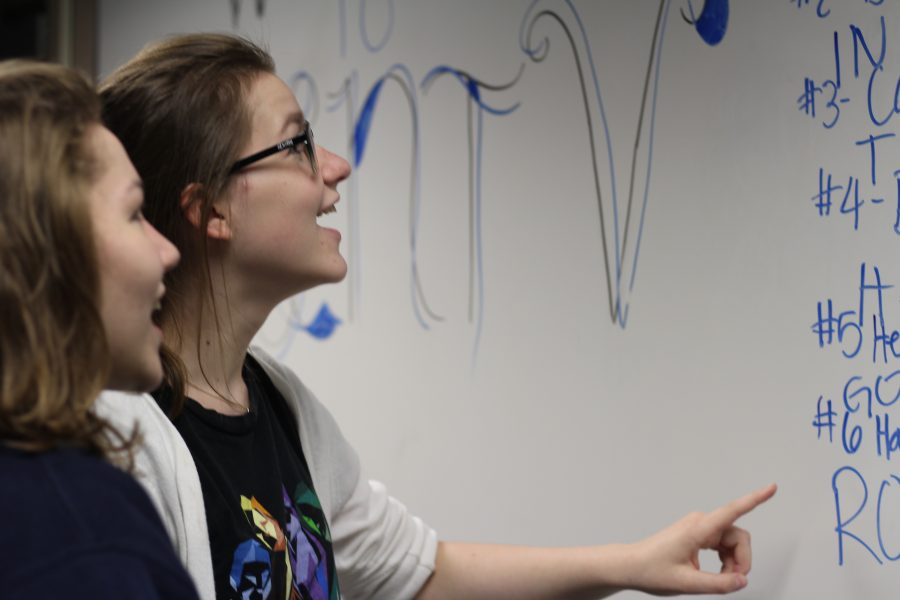 Sophomores Grace Erway (Left) and Bonnie Bremer (Right), have a rehearsal during 3rd lunch to determine their forensics piece for next year. They will be the multiple captains for next year's season.

Every year on Forensics Night, after the team says farewell to their senior members, it is tradition to announce who next year’s captains are. On March 10th, the most recent Forensic Night, the new captains were declared for the 2016-2017 season. The anticipation was at it’s peak for competitors have worked hard all year to prove themselves as a quality captain and leader.
There are usually seven official captains that help run the team because of the many events. When you’re a captain you have to help competitors choose, cut, and block their pieces as well as having regular pod and individual rehearsal to make sure everyone is prepared for the tournaments. On top of working hard with your peers to make sure they are on the right track, you must also work on your own piece. With a team that averages around 15-20 people, being a captain is a huge responsibility.
Juniors Sophia Boismier and Olivia Mears were previously captains, so they will carry on being senior captains for the 2016-17 season. Mears will continue to be Poetry and Prose captain, while Boismier will continue to be Duo captain. Sophomore Anna Kushner and Boismier will work together to run all the Public Address (PA) Events: Oratory, Broadcasting, Impromptu, Informative, Sales, and Extemp.
“I’m really excited to continue to help build up the team and see everyone grow and succeed,” said Mears. “It’s really bittersweet knowing that this is my last year, but I want to leave something great behind.”
Sophomore Drew Strand will take over as Storytelling captain and sophomore Henry Muscara will proceed as Dramatic Interpretation (DI) captain.
Multiple, the most intricate forensics event, requires creative blocking and chilling musical arrangements for a group of 4-8 people. This is the most sought after captainship. In the end, sophomores Bonnie Bremer and Grace Erway will take on the responsibility of leading the multiple team.
“I felt super surprised and happy when I heard my name called,” said Bremer. “There were so many great people to choose from, I feel so honored to take this task and think I can handle being a leader for my peers.”
Though not official captains, sophomore Amarra Lyons and freshman Joseph Welch have been put into leadership roles for they still showed dedication toward the team. Lyons will be head of social media while Welch will be in charge of freshman requirement, this will make sure that the freshman who are coming into high school actually know what forensics is and understand when to audition.
Forensics is different than other sports and teams because it’s very individual based. There aren’t a lot of practices where the whole team comes together because everyone is practicing different pieces and are often competing in different events. That is why having captains is so important because competitors need people that know what they’re doing so they can be as prepared as possible in competition. Through all the tears and the satisfying closure, the night was a good end to the season and there’s a lot of hope that the new captains will be excellent leaders for the forensics team through the next year’s forensics season.
“I believe this season, the Loy Norrix forensics team will be a force to reckon with,” said Erway. “We have a great start to our team and a mighty spirit.”
Delete Image
Align Left
Align Center
Align Right
Align Left
Align Center
Delete Heading