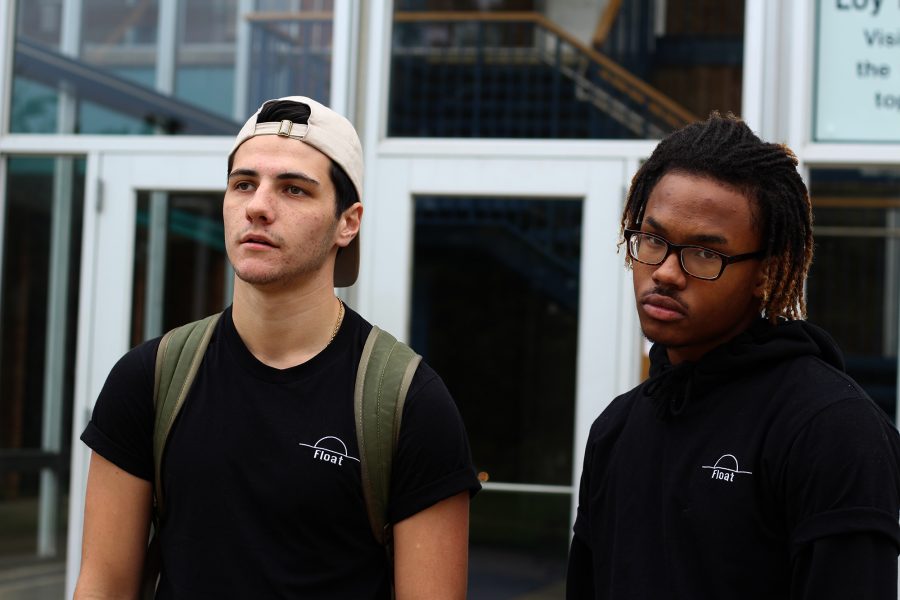 Wearing nice clothes and dressing fashionably is something that matters to high school students. Some students are taking fashion into their own hands. Loy Norrix senior Andrew DeHaan and Grand Valley State University student Colin Cady are co-owners of a premium embroidered clothing brand named “Float.” They launched the website on August 5th, 2016, starting their company.
Float offers high quality clothing to their customers, and lots of Loy Norrix students already own some. DeHaan works with another Loy Norrix senior, Jon Wilson, who is in charge of the media such as logo design, promotion and art for the company.
Owning a business can be challenging and there is a lot to consider before you start one of your own. Some of these challenges include having high quality material, reasonable prices and a marketing scheme to sell your product. DeHaan is aware of this issue.
“Before I started Float, I did a lot of background research as far as how a lot of other companies are started… after going to 12 different factories and talking to different people, I finally found one that I liked,” DeHaan continued. “Then I was in LA for a week with my dad and, weirdly enough, that factory was in LA, so I was able to go and actually visit it, pick out what clothing I wanted, what material, pick out the thread and build it together.”
Creating a business requires help from other people to stay up and running. Other people have important skills that can help a business be successful. Wilson came out with an original album featuring Float’s sunset logo earlier this year. Wilson and DeHaan have since then collaborated to create Float’s image and style.
“Well, I’ve helped mostly with designing. Designing is really my outlet in which I work in. I design most of the logos, a lot of the streetwear, the website, promotion videos. I’m more the media and art side of Float,” said senior Jon Wilson.
Float as of now offers t-shirts in black and pink, as well as hats, but there is more to come in the future.
“As of now we’re just finishing the first line of products we got, which was 70 shirts and 30 hats. Right now, I’m working on a long sleeve, [and] also looking for different companies to collaborate with. This fall we have crewnecks, hopefully a hoodie and [are] looking for flannels as well ,and hopefully a beanie cap,” said DeHaan.
Students that already own Float merchandise have several reasons for supporting this local company instead of buying common brand names.
“I wear Float because it’s organic cotton, it’s not, like, cheap material. My friend made it, and I like to support the logo,” said senior Laura Worline, a Loy Norrix student who represents Float clothing regularly by wearing their merchandise.
“Float’s style is more like Pacific Sunware type stuff, definitely not really a preppy clothing line, but I think it also appeals to everyone because it’s from someone from our school,” Worline continued.
Students at Loy Norrix as well as students from other schools are already representing their Float merchandise.
“Students can buy Float merch off our website which is floatclothing.co. You can contact me on Instagram, Twitter, VSCO actually as well, then we have a Facebook and we also have a Snapchat, so there’s multiple ways to contact me,” said DeHaan. “We accept credit cards and checks too, as well as online orders on the website. Personally, if you go to Loy Norrix, you can just come up to me and I can get you whatever you need.”
Every company has competition and tries to bring something new to the table which makes them stand out from other companies. Float’s mission is no exception.
“I like how unique we are and how we’re kinda doing something not a lot of people at our age are doing, and as far as what our message is and what we’re about, it’s different than a lot of brands that we’ve seen and we tried to make it so it’s unique,” said Wilson.
DeHaan, Cady and Wilson have just gotten started with their brand. Float offers clothing that can appeal to everyone. There will be more to come in the future. As of now, stay tuned and keep Floating.
Delete Image
Align Left
Align Center
Align Right
Align Left
Align Center
Delete Heading