Freshman Joe Meyers is not your Typical Two-Sport Star 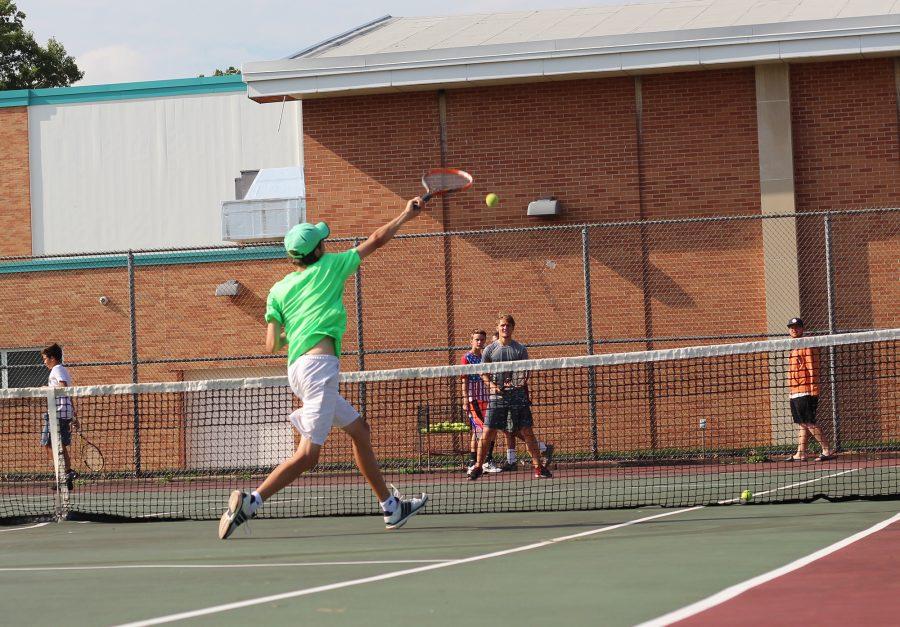 Think of your usual star athletes; they know they’re talented and they act like it. You can pick them out in a crowd, and you know that they’re an athlete as you pass them in the hallway. Not Joe Meyers. This young freshman is a whole different breed. He’s humble and quiet beyond belief, with a unique attitude towards his talents, regardless of the fact that he is a star on both the cross country course and on the tennis court.
“I kinda try not to go out and tell people what I do because it’s not their business, I do it for me — with my running and everything — so it’s not really something that they need to know,” said Meyers of his humble demeanor.
Meyers is already grappling the difficult task of not just playing, but dominating two varsity sports in the fall of his freshman year. He is the second best singles tennis player at Loy Norrix, behind fellow freshman Reed Crocker, with a 19-6 record. He’s also the number two runner on the Loy Norrix Cross Country Team, behind senior Gabe Runyon.
Teammates can testify to his amazing work ethic.
“He’s a pretty hard worker; if he’s not at tennis, he’s at cross country, which is pretty good,” said sophomore and cross country teammate Richard Sackett.
Meyers masterfully balances two sports that share the same season, and his talents fall short in neither.
“It’s kinda nice to have two sports and be really good at them,” said Meyers.
Handling all this training while keeping up with schoolwork is, however, quite a burden.
“It’s pretty difficult to handle all my schoolwork and having a social life,” said Meyers. Yet somehow he finds the time to train for not only tennis and running, but triathlons and cycling events too. He fills what little free time he has training with his father doing various cycling workouts.
“I play tennis after school with the team, and some days I get up and run miles before school, and I also do cycling with my dad every other day which helps stimulate my running,” Meyers continued.
Meyers is also adjusting to high school as the end of the first month of the school year approaches, and the social impact of playing on two teams.
“I’ve had people I don’t know come up to me and congratulate me and it’s made the experience more welcoming,” said Meyers.
You’d think someone with that kind of talent would have a massive ego, but not Meyers. He’s a quiet, almost shy kid, who takes modesty to a whole new level. He doesn’t brag about his accomplishments despite the fact that he has plenty to brag about.