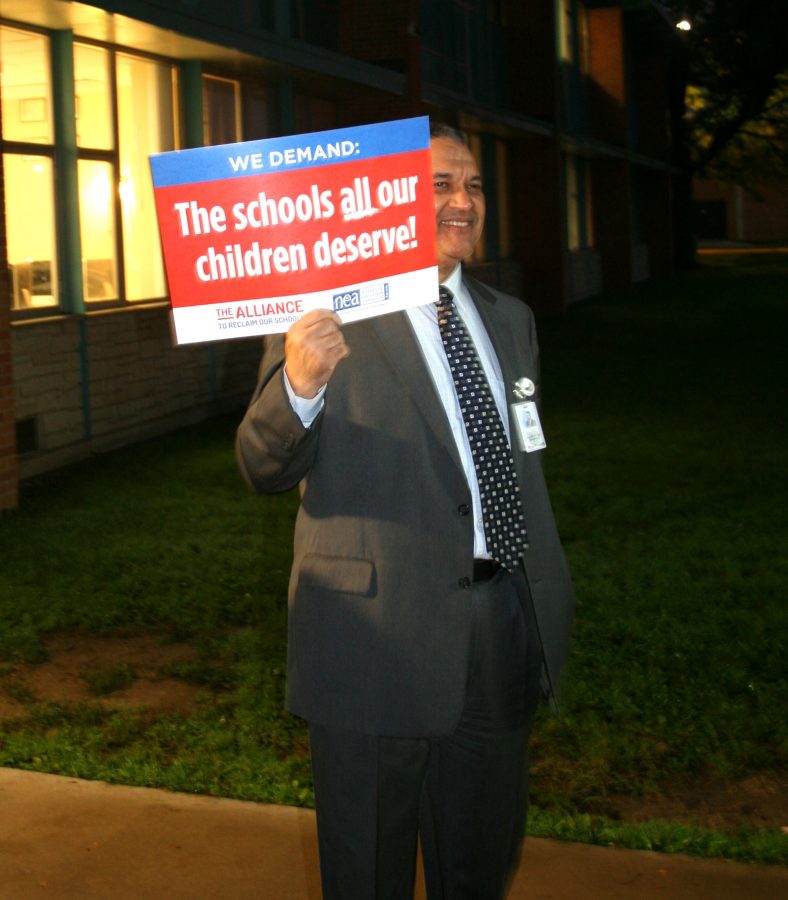 Bleary eyed high schoolers trudge through a crowd gathered in front of the main entrance to Loy Norrix. As the dark sky lightened, the air was filled with chanting. One voice calling out, “More time learning!” Each time the crowd replying, “Less time testing!”
On October 6, 2016 at 6:55 p.m., a crowd of teachers, administrators and students gathered in front of the main entrance of Loy Norrix High School to protest the amount of time spent on standardized tests and unequal funding for schools in Michigan.
The Loy Norrix community was not unique in their protest. Led by The Alliance to Reclaim Our Schools, more than 2 thousand schools across the United States performed peaceful walk-in protests on the same day. According to Kalamazoo Education Association (KEA) President Amanda Miller, 26 out of 26 Kalamazoo Public Schools participated in the protest.
“It was part of a national walk in. The reason that we’re against it [standardized tests] is it takes away class time and it takes away resources for things like computer labs,” said Miller.
According to The Alliance’s website, their 2016-2017 platform is focused on erasing discrimination in the distribution of funding and resources with extra focus on providing better resources for underprivileged neighborhoods.
In Kalamazoo specifically, the KEA is protesting the amount of time dedicated to standardized tests and advocating adequate funding for all schools and an education curriculum that focuses on the entire child with more emphasis on arts and physical education.
“Tests don’t take into account students are human, it doesn’t take into account poverty. Tests end up punishing students who need the most help,” said Miller. “The state has been using tests as a way to punish schools. They have threatened to shut down schools in Kalamazoo and schools in the nation have been shut down and reopened as charter schools.”
Some students were protesting more than just standardized testing. One student, junior Grace Barrett, was protesting the occurrence of bullying in high schools. Barrett knows firsthand the feelings of dejection and isolation caused by bullying.
“I have been bullied at school,” said Barrett. “The school should have less bullying and more love because it causes students to have depression and makes me feel isolated and alone.”
At Loy Norrix, the main focus of the protest was standardized testing. In a study done by CBS News it was revealed that the average public school student takes 112 mandatory standardized exams between kindergarten and senior year. Many protesters were holding signs reading, “Freedom from anxiety caused by tests!” “Kids are more than a test score!” and “Schools all our kids deserve!”
According to a survey performed by the California Teachers Association, out of 200 teachers surveyed, 68 percent report that they spend anywhere from 20 to 60 percent of their class time on test prep.
“A lot of class time is taken away from instruction by standardized testing,” said Loy Norrix guidance counselor Susan Benton.
Benton felt that it was important for students to see their educators standing up for them and their learning. “It’s good for students to see this too because they’re the ones taking the tests,” said Benton.
Benton and another guidance counselor, Pamela Robinson, protested together. Both expressed concerns about the amount of attention and importance given to standardized tests by not only Kalamazoo Public Schools but the nation.
“Students are judged and given a number because of testing. They are more than a number,” said Robinson.
For students, testing is an added layer of stress.
“Testing makes us feel stupid if we don’t get a good grade because we learned this stuff in class and we feel under pressure during the test,” said sophomore Demario Morrow.
Protestor and Loy Norrix Principal Rodney Prewitt, said it best, “Testing doesn’t measure a person’s true ability.”
The Loy Norrix community values growth in their students academically, socially and emotionally. Teachers want to spend their time focusing on teaching their students, not preparing for a test. It is clear that this school has a strong voice and isn’t afraid of speaking out for what they believe in.
Delete Image
Align Left
Align Center
Align Right
Align Left
Align Center
Delete Heading