"The Book of Mormon": Shocking, Offensive and Wonderful 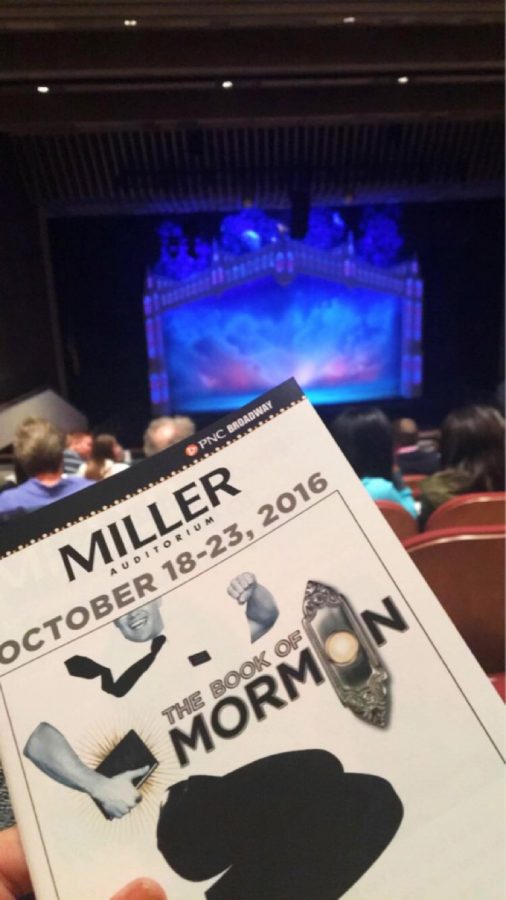 There are certain things that you want to bring your parents to; baseball games, museums and parent teacher conferences (when you have decent grades). Everyone knows that watching a romantic movie with them should be avoided at all costs, but there are some things that you always expect to be family-friendly. As someone who doesn’t know much about theater, I assumed that musicals were one of those things. If you are anything like me, then “The Book of Mormon” will quickly change this naive assumption.
“The Book of Mormon” is a musical that pokes fun at Mormon mission trips and social issues such as race, poverty and sexual orientation. I made the mistake of taking my dad to see it at Miller Auditorium. Being that he is a wistful theater geek and his birthday was coming up, I saw this as the perfect present. So we set off for dinner on campus, and even though I could say a lot about the burrito that left him a bit under the weather, that’s another review for another time.
The night was already off to a shaky start after what I’m calling The Burrito Incident so I was excited to just get to Miller and see the show, but of course, we encountered another bump in the road due to my lack of attention to dates. Despite having actually booked tickets for Sunday, the nice people at Miller graciously allowed us to trade tickets to see the musical that night.
So as we set off to find our seats, I noticed something. Some people were dressed quite nicely, in beautiful gowns and collared shirts, and some were dressed like they had just come from class. Now I, not knowing much about the show but assuming that theater equaled classy, was dressed as fancily as any 19 year old can will herself to be on a Wednesday night out with her dad. It may seem like an insignificant thing to notice, but it’s small details like these that should have indicated just what type of show I was about to watch.
“The Book of Mormon” is many things. It’s vulgar, it’s offensive and it’s definitely not something to bring your religious father to see as a birthday present (seriously, I’m talking sex jokes and sacrilege galore). Coming from the minds of Trey Parker and Matt Stone, the creators of “South Park,” what else could anyone really expect? It’s very apparent that the people who wrote a television show starring fourth graders who range from morbidly obese and anti semitic to being the children of full blown drug addicts wrote this musical.
If you’re looking for something a little more tame to see on your next trip to Miller Auditorium, just about anything else will fit that criteria. However, as Parker and Stone do with “South Park,” they somehow manage to create something that’s shocking and ugly, but still fresh and not crass just for the sake of being crass.
I am not the kind of person who typically enjoys theater. When I think theater I think Shakespeare and Tennessee Williams, mostly old or serious shows that don’t really strike me as being overly entertaining. This show truly did completely change my perception of what theater is and has the potential to be. The singing was phenomenal, the dancing made me want to get out of my seat and join in, and after all the jokes it wasn’t just the burritos that were hurting my stomach.
I would praise individual cast members if I thought that some stood out above the others, but this was not the case. Every single person involved was fantastic. The sets were beautiful and immersive, the songs ranged from touching, emotional numbers about characters struggling with personal conflicts to huge dance scenes centered around tricking two unsuspecting Mormons into giving the middle finger to God.
Despite wishing I had taken literally anyone else with me to see “The Book Of Mormon,” I thoroughly enjoyed the entire thing. I’ve been dragged to my fair share of shows around Kalamazoo, but none have left me wishing for an encore like this one did. If readers can take away anything from this review, I want it to be that I would recommend this show to anyone who is skeptical of how entertaining and current theater really can be, even if you are someone like me who has never been compelled to go to plays or musicals of your own accord. Go, experience “The Book Of Mormon” in all of its politically incorrect glory, and whatever you do, do not bring your dad.
Delete Image
Align Left
Align Center
Align Right
Align Left
Align Center
Delete Heading