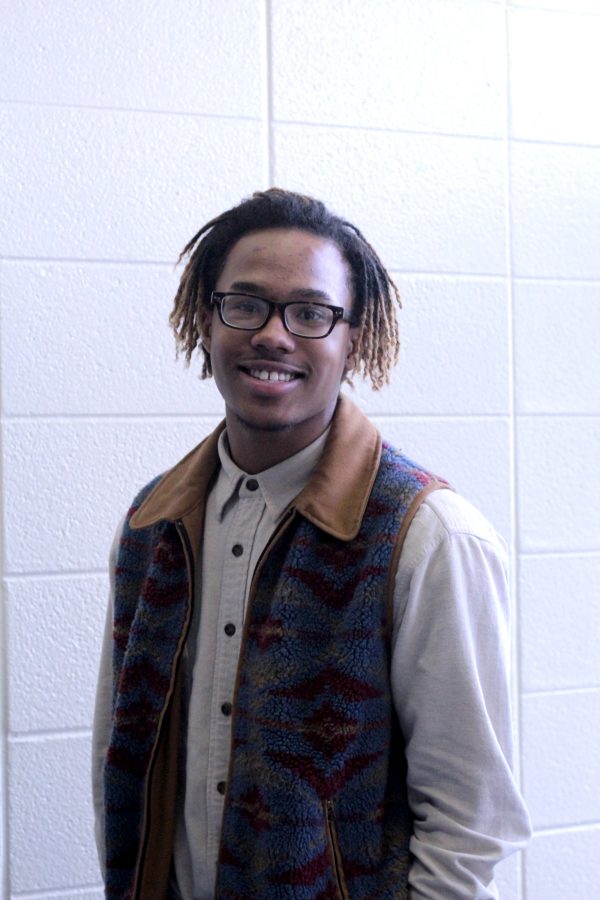 Loy Norrix senior, Jonathan Wilson, smiles for a photograph while talking about his passion for music. His music has made him a popular artist around Loy Norrix. Photo Credit / Bailey Handley

Loy Norrix senior, Jonathan Wilson, has had a passion for music ever since he was a young boy. Born in Chicago, Illinois, Wilson moved to Kalamazoo, Michigan when he was six months old. Wilson started writing and making his own music at nine years old after listening to a lot of R&B music. Getting a feel for making music at such a young age has shaped Wilson into quite a unique and popular artist around Loy Norrix High School.
“My mom played a lot of oldies and Motown while I was growing up. Listening to my role models and their melodies inspired me to start my music career,” said Wilson.
Andrew DeHaan, a senior at Loy Norrix and close friend to Wilson, is one of Wilson’s most loyal listeners. About two years ago he listened to Wilson’s music for the first time and ever since then he has listened to everything Wilson releases.
“Jonathan’s music gets better and better with everything he releases. Hopefully, more people start to listen to him as his musical talent increases,” said DeHaan. “If he really buckles down and makes music a priority for himself, I believe he can take his music as far as he wants to go.”
Wilson’s music inspires a variety of emotions in its listeners.
“It all depends on the type of song he makes. Some songs are more of a hype song, like ‘Trap Song,’ that gets you motivated and energized, and others are more mellow and get you in your feelings, like ‘Searching for Arizona,’” said DeHaan.
James Rinehart, a senior at Loy Norrix and musical partner to Wilson, has made multiple songs with Wilson and has a great time doing it.
“Making music with Jonathan is fun for the most part. He is very talented and there is a lot of goofing off that goes on in the music making process, but when he gets to work he goes into a mood where he cannot be stopped.” Rinehart continued, “He has multiple talents and knows what sounds good for his type of music. He doesn’t listen to anyone else’s opinion when it comes to making his music because he makes music that he wants to hear.”
To Rinehart, there a couple things that makes creating music with Wilson so enjoyable.
“Jonathan somehow balances completely joking around and getting the job done, which is my favorite part of working with him. When the product comes together, it is awesome to hear because we know everything that we put into the process was finally worth it,” said Rinehart.
Wilson makes music not only for himself but for others as well. He makes music as a form of expression and to release emotions, which he does in such a creative way that a variety of different people can vibe to. Music is his passion and he enjoys making it for his listeners. Not only are his listeners people who support him as a young, up-and-coming artist, they listen because they enjoy the way his music makes them feel.
Wilson wants to take music far into his future but he isn’t going to force something that isn’t there.
“I’m optimistic on where my music will lead me, but I just let it do its own thing. I make what I make and you can take it or leave it. We’ll see where it takes me, I’m not one-hundred percent sure yet,” said Wilson.
Wilson has plenty of listeners throughout Loy Norrix and the community, but he wants his music to reach even more people.
“Man, just let everyone know to go visit floatwjon.com and give my music a listen. I need everyone to come float with Jon,” said Wilson.