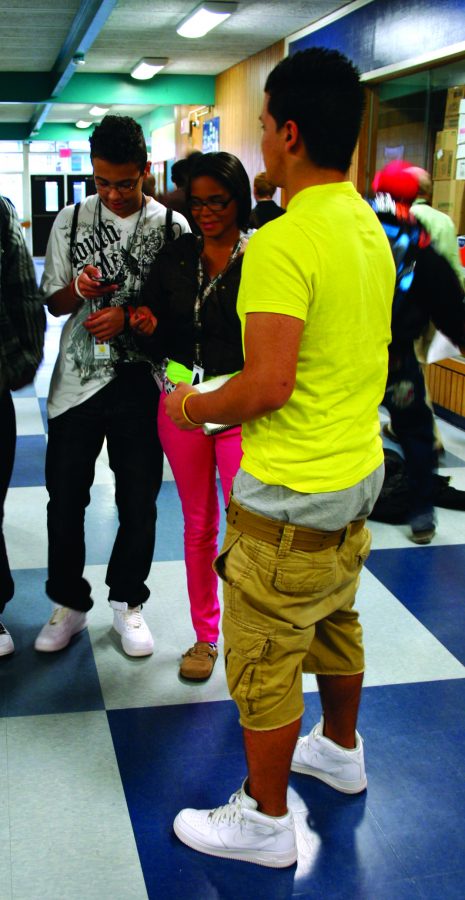 Sophomore Juan Paz finds it comfortable to wear his shorts below his butt. He does not understand the purpose of a belt.

You don’t have to be an American Idol fanatic and have seen General Larry Platt perform his original song to know what I’m talking about. On the 9th season of American Idol, Larry Platt auditioned with a song he wrote himself. Platt explained that he wrote his song after he was walking downtown and witnessed a man sagging his pants so low, they were almost on the ground.

“He had his underwear showing,” Platt said in an interview on The View.

It is estimated that sagging originated sometime between the 1970s and 1990s because prisoners in jail, got their belts confiscated in fear that they would use them as weapons or a device to commit suicide. The reason for this problem among prisoners is understandable. Big pants + no belt = difficulties keeping your pants up. How did this situation eventually lead to a trend?

It is said that after members of a gang were released from jail, they still sagged their pants, symbolizing they were apart of a gang. Others just thought it was an up and coming fashion trend, and the revolution began.

Sophomore Alex Babbitt is someone who chooses not to follow the trend.

Although the fashion statement could make you tardy to class, some people like Freshman Luiz Felippe Santos do not have a choice between sagging and not sagging. “Occasionally I sag, but only when I forget my belt.” Santos said that, “Most people think it is stylish and cool, but then, a select few just don’t have a belt.”

Since sagging is popular at Loy Norrix HIgh School, the staff also has a say in the matter.

Atiba Mckissak’s assistant, Trina VanderVelden says, “Yes, I tell students to pull up their pants, but not as often as I should. I think sagging is very disrespectful.”

At Loy Norrix, it is possible to get in trouble for sagging. It could make your detention, become Bridges, or even get you a referral.

To sag, or not to sag? The choice is up to you.