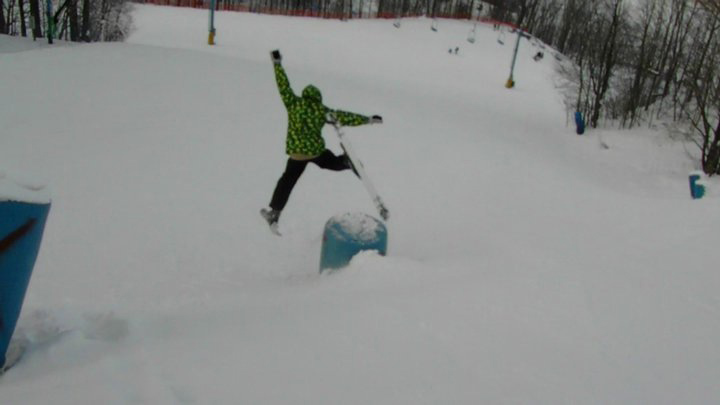 Ben Miller, freshman, has been skiing for about three years. Every winter, Miller goes skiing. Photo by Jonah Van Dyk

It’s wonderful and terrifying all at once.

Every winter, legions of brave souls find themselves on various icy precipices, preparing to hurtle down them. Despite the biting cold, whenever it is not too dangerous to be outside people come in droves to ski and snowboard.

In the beginning, novices strap on their skis and wobble out onto the snow. They consider it a success to make it all the way down a hill in one piece. As time goes on, though, they get creative. Slalom poles, moguls, and jump ramps make skiing more exciting than a James Bond movie. Experts flash and spin through the air, seemingly unaffected by gravity.

Loy Norrix freshman Ben Miller enjoys skiing. He’s been doing it on and off for four years. Miller is midway between expert and novice, able to jump and spin through the air, but taking a few tumbles in the process. This winter will be Miller’s third season of serious skiing, complete with his own equipment. There are two places to ski near Kalamazoo, Timber Ridge and Bittersweet Ski Resort. Miller has skied at both of them.

Few escape from skiing unscathed. Miller has had some spectacular falls, resulting in unusual injuries. Miller once broke his wrist after landing badly during an attempted spinning jump. This is one of the most lasting injuries Miller has sustained. Mild falls are much more common.

Some skiing falls are spectacular to watch. Since people are traveling at high speeds, and skis are designed to come off to prevent lower leg injuries, equipment can end up far away from its owner. After a fall, Miller claimed to frequently find “the ski that’s way farther up the hill than you could ever have imagined.”

According to the National Ski Areas Association, fatal and disabling injuries are rare – less common than being struck by lightning. Statistically, though, the majority of skiers will sustain a serious injury at some point. Eventually, everybody hurts themselves skiing.

“I decided that I would do this jump that was really icy and bigger than what I would normally do,” Miller said. “As soon as I went off of it, I just sort of face planted.”

That face plant caused Miller to tear the ligament in one of his thumbs.

Skiing is cold. It is painful, and it is difficult. Why, then, bother doing it at all.

Because the joy outweighs the risks.

“It’s one of the greatest things,” Miller said. “When I first went off a massive jump, I felt like I could do anything.”

Skiing, like many sports, gives participants a runner’s high. Unlike most sports, though, a person on skis gets to go faster than they ever could on their own, and yet not rely on a machine to accomplish it. There is nothing better than flying over the snow.