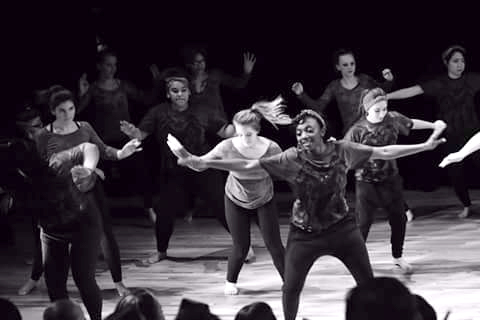 A three year old in a baggy diaper and a Minnie Mouse shirt begins to hear a very upbeat noise. She looks around to find the source of the sound, but only sees her mom. Her limbs start moving. She focuses on the music of the 90’s,  bouncing up and down to the beat, giggling.
That was how it all began for Loy Norrix High School junior Julia Perry. Ever since her mother played music that made her toes tap, Perry was ready to dance.
Perry now dances for the Rootead Dance Company under her instructor, Heather Mitchell.
“She [Heather Mitchell] told me that the dance doesn’t make you, you make the dance,” Perry said.
Perry has had a bumpy road, but now has her sights set on going to college and creating a career out of her love for dancing.
In the beginning, Perry was not always the best behaved. She would disrespect teachers and had a negative attitude towards adults and her peers. Perry would regularly get in trouble at school, which would prevent her from going to college dance performances on her own time, such as those at Western Michigan University (WMU) and Lake Michigan College.
“I was more upset with myself than I was with the situation,” said Perry, as she reflected on the past.
This feeling pushed Perry to do better for herself. She began changing the way she acted and participated in both her school and personal life. Perry wanted to be known as a dancer, not a fighter or someone who argues a lot. These thoughts and feelings provoked Perry to start raising her hand more in class, especially when she had a question, to pay more attention to the learning material and to start completing her assignments on time.
According to HELPGUIDE.ORG, a website that gives advice on mental health, dancing is a productive way of relieving anger and frustration.
Being a part of dance has also helped Perry gain confidence and change the way she thinks in any environment she puts herself into.
Perry excels in African dancing, a primary focus in Rootead’s programs.
“There is a story within the dance and every dance done has a meaning,” said Perry.
In the New World Encyclopedia, an online area of articles from the sciences to the arts, African dancing follows a rhythm to incorporates a message into the movements. This kind of dancing is a major part of Africa’s many cultures. Throughout history this type of dance can signify the worship of a deity, ancestor or celebration within a tribe or group. This artform now  incorporates urban traits to create the style it has become today, the style that Perry practices in.
Perry connects most with the Maunganui dance, a style she describes as an African dance that incorporates a story into the movements. One Maunganui story Perry connected to is about a playful little girl who is one of the best dancers in the village. The little girl is looking for another child to pass her skills onto because she knows she can’t be a little kid forever.
“This dance brought me back to when I was a kid, to a place where I was always happy,” Perry said.
Juggling two jobs, school, a social life and two dance classes is tough — especially when you need to remember eight dances at a time. Perry, however, handles all of this with ease. She makes sure there is constantly something in place to keep her busy. Even with a packed schedule, when she is on the stage it is easy for her to dance and forget about everything else that might be bothering her.
“I’m very calm. I don’t hear anything else. I don’t see anything else,” Perry said. “I feel like I’m looking in a mirror that is not really there.”
In the future, Perry plans to graduate from college and open her own studio in order to give kids with little opportunity a chance to dance and express themselves.
“I can’t be stopped by anyone or anything,” Perry said.
Delete Image
Align Left
Align Center
Align Right
Align Left
Align Center
Delete Heading