The Multiple Team is Next to Normal 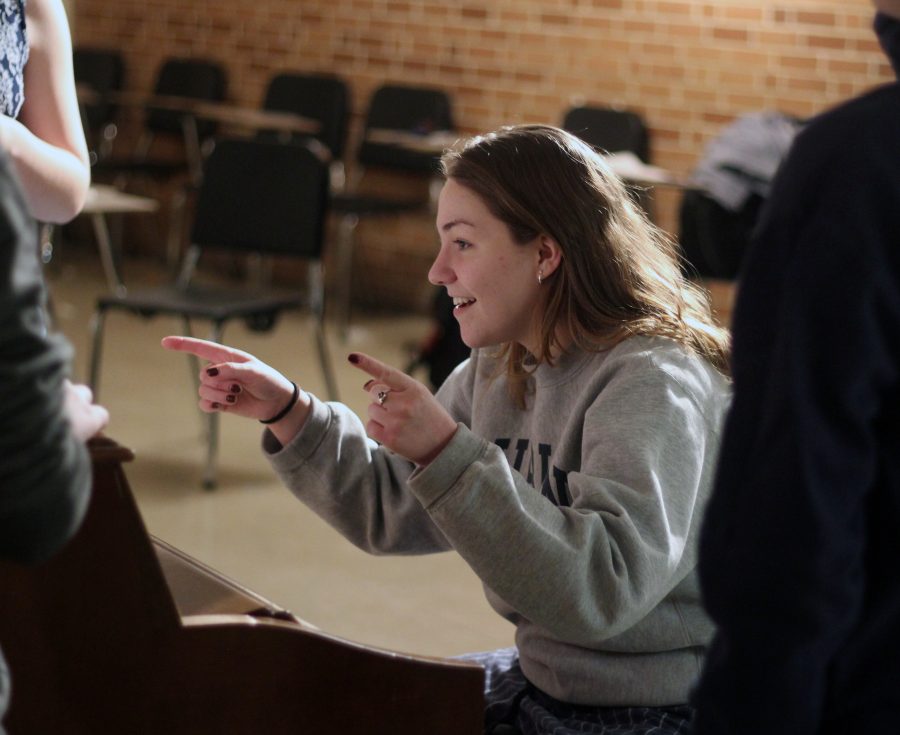 Junior Grace Erway sings and directs the voices of the team. While she does this, she adjusts their pitches and respective notes to make the finished product sound more audibly appealing. Photo Credit / Sidney Richardson

Among the many events that make up the forensics department, a department that showcases the acting and speaking abilities of a performer, you will find the Multiple Team.
Multiple is an event in forensics where small teams of actors compete to perform mini musicals and plays. Performers are asked to sing, dance, act and move blocks to set their own scenes. Teams are made up of 5-8 members.
The Loy Norrix team is made up of senior Giovani Diaz, juniors Grace Erway, Victor Moss, Drew Strand, and Bonnie Bremer, and freshman Ella Ledbetter. The team competes in four tournaments this season and if successful, they compete at the regional and state levels.
This year’s team is performing “Next to Normal,” a musical written by Brian Yorkey and Tom Kitt. The musical touches on many modern issues involving mental health and tragedy, such as schizophrenia and depression. The musical itself is relatively new as it debuted Off-Broadway in 2008. “Next to Normal” then had its Broadway debut in 2009. “Next to Normal” is a critically acclaimed musical, as it was nominated for 11 Tony Awards in 2009 and won 3 of them. The musical also won the Pulitzer Prize for Drama in 2010.
The job of the multiple cast is to compress a two hour musical into a 10-15 minute period. It’s quite a task to fit eight songs and a plot line into that time frame.
“Multiple is one of two events that require more than one person. It is essentially a ‘mini musical,’ [the team captains] take these elaborate pieces of literature and shrink them into a 15 minute piece. There is music involved, various blocks and stools, stage directions and so much more,” said Forensics coach and drama teacher Paige O’Shea. “They truly have to work as a team because as soon as the judging begins, they have no time to pause or rethink. It’s amazing to watch them grow and learn to live ‘in sync’ with the piece.”
The team members must cut down the musical while maintaining the storyline. This tough task is headed by co-captains Bonnie Bremer, who is in charge of the script, and Grace Erway, who is in charge of the music. Being a captain comes with a lot of challenges.
“It’s not easy at all, it’s super challenging, there’s so much you need to focus on. With a co-captain, you have to be on the same page. Grace and I balance each other out, I catch her when she falls, and she catches me,” said Bremer.
The team is a solid mix of veterans and newcomers. The only senior of the bunch, Giovani Diaz, is a newcomer to the theatre and forensics scene. Diaz was finally brought out of his shell by drama teacher, O’Shea. Now he finds himself a part of both the multiple team and playing a lead role in this year’s musical, “High School Musical.”
“I’ve never really done it before, there’s nothing that’s super tough to get used to though, I feel like I’m finally somewhere where I can be myself,” said Diaz.
The veterans of forensics have a love for the event that brings them back time and time again. That’s the case for Erway.
“I love the inclusive team atmosphere and the way the creative flair is ignited in all of us,” said Erway.
The potential is very high for this group as the program continues to grow over the years. The optimism surrounding their upcoming season is evident.
“This year, I believe we have the potential to raise our overall placing in the State. Last year, we were 10th overall, which was great but we had the potential to do much better,” said O’Shea. “This year, our talent has increased, organization has increased and our overall motivation is much stronger. Even though I am an optimistic person, I feel valid in my belief that we will place very high this season.”
The program has steadily grown and improved as time goes by and the expectations have grown. The group looks to build on their 10th place finish last year and continue their upward momentum.