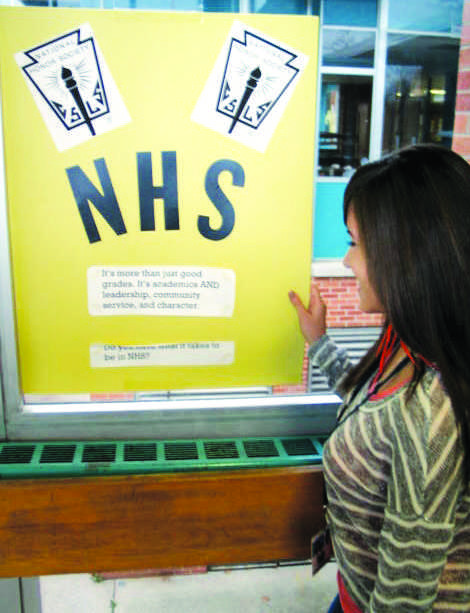 Junior Jade Hubbard takes a look at what it takes to be in NHS. Hubbard, among others, will be inducted into NHS on December 5th. Photo by Ray'Von Jones

“To create enthusiasm for scholarship, to stimulate a desire to render service, to promote leadership, and to develop character in the students of secondary schools” is the purpose of the National Honor Society (NHS) as stated by its constitution.

The National Honor Society is a program that recognizes high school students who have demonstrated excellence in scholarship, leadership, service, and character.

Alongside Social Studies department leader Matthew Porco, Social Studies teacher Art Williams has been an advisor of the Loy Norrix Chapter of the National Honor Society for 12 years. Prior, Latin teacher Barbara Felkel was the advisor for 15 years.

“[National Honor Society] is an organization that is dedicated to the service of others,” Williams said.

This dedication is reflected by the service projects that the Loy Norrix Chapter of the National Honor Society takes part in, such as the Bread Lift for March of Dimes that took place on November 19, 2011. In this project, NHS members went door-to-door to raise funs for March of Dimes, an organization dedicated to the prevention of premature births.

Senior Allie Pines, current secretary of the Loy Norrix NHS Chapter, first realized that she wanted to become involved in National Honor Society when she saw her older brother graduate as a NHS member.

“Once I entered high school, I realized that I really like working in the community and thought that NHS was the best way to do that as a Loy Norrix student,” Pines said.

Students can apply for NHS membership during the first trimester of their junior or senior year.

In order to be eligible for National Honor Society membership, one must have at least a 3.5 cumulative grade point average. In applying, the applicant must elaborate on his or her community service background and leadership experience. An essay and teacher reviews are also incorporated. A council of faculty members reviews the applications and makes the final decisions.

“Be honest. The faculty council is looking for character just as much as service, so be as genuine as possible,” Pines said.

This year’s applications for National Honor Society have been reviewed, and the following Loy Norrix students have been offered membership: