NEHS Inducts Students to Start off the New Year 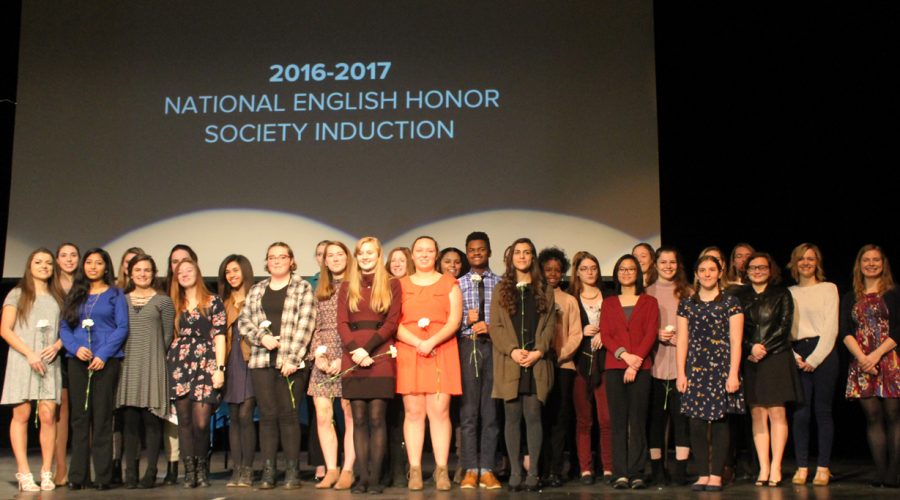 All the members stand on the stage at Loy Norrix to congratulate and recognize the newcomers. Photo Credit / Olivia Mears

On the night of January 10, 2017, the National English Honors Society (NEHS) inducted 21 students into the program. NEHS is a national organization that does community projects. It’s a big responsibility and difficult to get in. Evie Bartley is one of the many students that were inducted. She is a junior at Loy Norrix who enjoys english very much.
“You’re a part of a national society and you have to uphold the expectations of the standards of the society. I joined because my sister was in it as well as I really enjoy English and I believe that I am good at it,” said Bartley.
Brianna English is the Co-advisor of NEHS along with Jameeka Johnson and Lauren Kinnamon. English is an English teacher that also runs the yearbook class at Loy Norrix. She has been a part of NEHS since it started 4 years ago in the spring of 2013.
“My favorite part about NEHS is having the three major projects which are the poetry slam, the literary magazine and readings at Winchell and giving kids the opportunity to be involved in that,” said English. ”But also getting the rest of the school involved in it because the poetry slam is poets from Norrix and the literary magazine is anyone who wants to submit work.”
The poetry slam is held at Barnes and Noble in March and more than 20 students attend each year that it has ran. Students submit their work in February, then the committee reads the poems and selects 5-6 students to read their poems in March. After the students are selected, they practice two times before the actual event. Maria Egloff has run the poetry slam for 2 years and she organizes it all along with Johnson.
“It’s good. Last year was really my first time running it. It made me learn a lot from calling businesses and ask if they would hold the poetry slam. It gave me a lot more of communication skills and it was great,” said Egloff.
The literary magazine is a published magazine that holds poems, songs, pictures, short stories and different pieces of art. It’s a student driven classroom and anyone can insert their piece in the magazine. It’s to give kids the opportunity to express themselves and show their creativity.
To apply to NEHS you have to fill out an application that asks what English classes you have taken and what grades you got. Also, if you have gotten into any trouble to describe when and what for. If the National English Honors Society sounds interesting to you, you can grab an application in the office.
The students that were inducted include:
Jasmine Adams
Evelyn Bartley
Sophia Boismier
Lacey Burke
Madisyn Caldwell
Karis Clark
Emma Fergusson
Abigail Guimond
Kristina Hubbell
Lauren Johnson
Katherine Kay
Sigourney Koprek
Anna Kushner
Emily Lewman
Ferren Olmsted-Meade
Elizabeth Perez-Vasquez
Hannah Pittman
Amanda Reimer
Shante’ya Scott
Michaela Whalen
Victoria Zehner