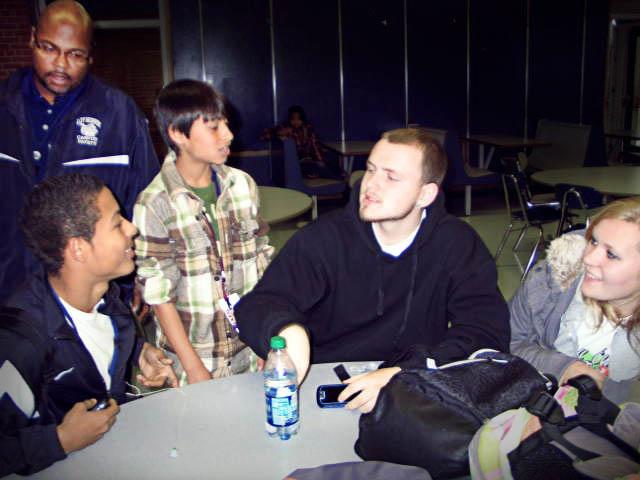 From right to left, EFE/EFA students Alex Bridges, Joey Veeder, Justin Perez, and Brandie Batten wait in the cafeteria before their next class. Although EFE/EFA students do not have anywhere to be once they return from their off site class, due to the heightened security with the tardy procedure, an officer checks in on where they need to be. Photo by Sarah Sherman

With the beginning of the 2011-2012 school year, administrators at Loy Norrix High School began a new tardy procedure and removed the five-minute warning bell before classes. Vice Principal McKissack said the change was to try to get more students to come to class on time.

In previous years, a warning bell has sounded before the final bell for classes to begin in the morning, while this year there is only a release bell and the bell marking the beginning of the next class. Also new this year, every third tardy results in a referral, and students are given a double dose of hallway etiquette announcements before class can even begin, via announcements and PowerPoint slides. Is all of this extra attention on students being late to class actually helping, or is it just the extra attention drawn to the issue that is drilling the rules into student minds? I think it is the latter.

At the beginning of the school year, the new tardy procedure was announced—on the first and second tardies, the teacher informs the student of potential consequences, and at every third tardy, the teacher issues a referral. We’re still not clear on what the consequences of a referral actually are. Immediately, many students and staff alike were confused and opposed to logic of the procedure. For instance, many students referenced the contradictory nature of in school suspensions taking time out of a student’s day because they were tardy in the first place. A trimester into the school year, the question is, is all of this fuss actually doing any good?

In late October and early November, every LNTV program ended with a special blurb read enthusiastically by freshmen Olivia Stier, reminding students that being in the halls is irresponsible and takes away a staggering 900 minutes from their education if they choose to hang in the halls five minutes after class starts.

When this program is over, Mr. Edwards would promptly click onto the intercom like he had been waiting, hand hovering over the speaker button, to re-state Norrix’s hallway guidelines… “It is OK to chat but hanging out to chat is not acceptable, that is, you need to keep moving.”

After that, the teachers were all required to show a power point re-stating the hallway policies, although, I have not heard of a teacher pulling up said power point since the first announcement two weeks ago. We are all reluctant to hear it again.

As senior Nick Moored put it, “It’s not like someone who never shows up to class will change his life because of the announcements, and say ‘you know what, he [Mr. Edwards] is right’ and then start coming to class on time.”

Moored is right, few chronically late students would hear the announcement when walking into school and decide to turn his or her behavior around. It is the sheer repetition that is making students really think about lingering in the halls, but tardy occurrences have gone down, nonetheless.

Assistant Principal McKissack said, “Certain kids will always be late to class, but at least we can prevent new students from becoming constantly tardy.”

When one hears over and over again that something is negative, eventually it will have an effect, especially with something so simple as being on time to class. So it seems the repetitious reminders of the new procedure have not fallen on deaf ears here at Norrix.

“It does seem like people are more aware of the tardy procedure,” said C-Wing science teacher Alison Nelson.

McKissack said, “We have noticed a significant decrease in tardies.”

Although he did not have the actual numbers to prove this, he explained that the stricter procedure was meant to build habits that will carry students through the rest of their life.

Showing a parallel to life outside of high school, McKissack said, “If you keep showing up late to work, you will be unemployed.”

McKissack makes a valuable point that students often forget—the “real world”, the world outside of high school, is much stricter than our small microcosm of high school.

Students now rush to class, I often see them running in the halls, not to release their pent-up teen energy, but to hurry to class. The fact that the administration is not planning on reinstating the warning bell has finally settled into students’ brains.

Although the perfect procedure will never be found, as students will always find one reason or another to linger in the halls (eh em), McKissack says our current tardy procedure is one of many Norrix will try before finding one that really works. But don’t get too excited, McKissack said, “We’re not going to switch the tardy procedure mid-year.”

So buckle up and get used to the angst of a warning bell-less school year.

As McKissack said, “The only thing you can afford to be late to is your funeral.”