Outcome of Discipline, Commitment and the Positive Attitude of Loy Norrix Athletes 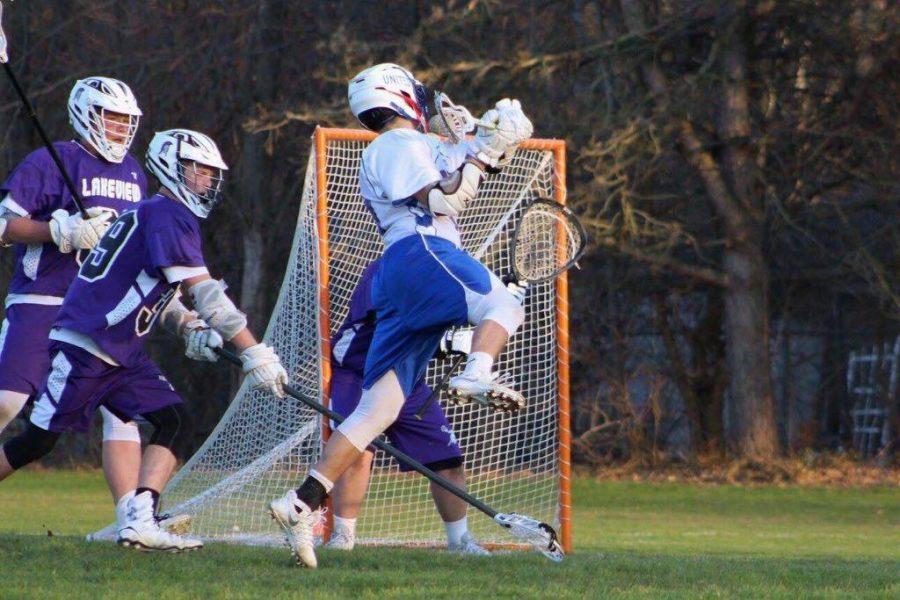 
There are many athletes in the world that want to be the best of the best but not all of them have natural athletic talent. Many athletes, whether they play soccer, football, volleyball, baseball or any other sport, have to work to go where they want to go in their sports career. Many athletes talk about their dream but do not actually do anything about it. Don’t talk about it, be about it. Do something to succeed or achieve.
There are athletes a Loy Norrix who have obtained discipline, a positive attitude and commitment. One of those athletes is senior Andrew DeHaan, a student athlete and Kalamazoo United lacrosse player. DeHaan has been playing lacrosse for ten years and he loves every moment of it, whether he’s at practice or a game.
“I love the physical and the personalization of the game. I enjoy it as something fun and competition. We win and we lose and that is part of sports,” said DeHaan.
In sports, we win and we lose, and it is our choice if we are going to take something new from the defeat or something positive from the win. Sometimes it is not about the winning or losing.
Winning is simply a mindset, a mindset that is developed only by outstanding individuals. Individuals that go to the weight room, run and practice when nobody is watching. It is not about talent, it is about effort. Effort will get you the win when the talent is not available. You win when you put in the hard work when no one is watching. It takes commitment and discipline to be better day in and day out. You do not exactly need to have the natural talent to be good at anything. You just have to have the positive attitude.
DeHaan is an athlete and a great student. When it comes to being an athlete he does not have the natural talent as some of his lacrosse teammates, but he always shows up disciplined, committed and with a positive attitude to games and practices.
“Playing lacrosse taught me a lot of discipline because my athletic ability was not natural. [It] took certain motivation to be committed and determination to be better. It also took strong work ethic for me to be as good as my teammates,” said DeHaan.
Sports can teach you life lessons. We can find our best moments as well as our worst moments just from playing sports. It is up to the athlete whether he is going to let his worst moment or best moment affect their  playing in the upcoming games.
“The worst moment for me was when a 6 foot 3 tall kid ran into me during my teams 4 on 3 attack. I had a really bad concussion,” said DeHaan.
The concussion did not stop DeHaan though. He continued to play on after a recovery. That injury motivated DeHaan to be better. He came back stronger for the Kalamazoo United Lacrosse team. The injury taught him no matter what, he is going to be positive and fight through the concussion.
In the spring of 2015, Kalamazoo United faced the second best team in the conference, Lakeview, which only had one loss. Things were about to be very complicated for the United Lacrosse team who were having a hard time winning. That did not stop DeHaan and his teammates from winning the game. The game ended 14-13 with Dehaan having the winning goal.
“For me that was the best moment of the game. Scoring the winning goal against a very good team. I felt a sense of achievement after the game. I was very proud of the team for going all out till the end,” said Dehaan.
Andrew ended up having 7 goals and 5 assists for Kalamazoo United against the highly ranked Lakeview. He was very proud of his achievement.
“Just from seeing the attitude of my lacrosse team, I see a change that needs to happen in the atmosphere, I see a lot of talent that is unguided. Being positive is hard sometimes, but I see a lot of room for growth for not only the lacrosse program, but for the athletic program in general,” continued DeHaan. “A lot of ego seem to come into play and mess with a winning mentality. I believe that Kalamazoo Public Schools have the best athletes in the area and many of the talents are not being utilized due to egos and improper role models.”
There are practices every day for high school athletes and some work really hard and others don’t. They just don’t think it’s worth it. If it’s not worth it then why play? Commitment and discipline day in and day out is what makes athletes better. Hard working athletes will improve and show up to games ready to fight and win.
Delete Image
Align Left
Align Center
Align Right
Align Left
Align Center
Delete Heading