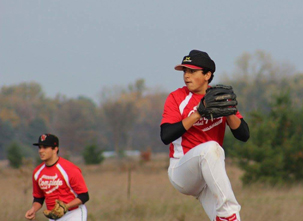 
Playing baseball is not just one person’s job, it takes team effort and balance. Junior Adam Dorstewitz enjoys playing baseball. Dorstewitz has loved playing baseball since he was six years old; and he has been on the Loy Norrix baseball team since he was a freshmen. To Dorstewitz, a good team means balance.
“Every player can carry his weight at the plate, and they know the game backwards and forwards; errors are physical and not mental,” said Dorstewitz.
Dorstewitz also joined tennis to get in better shape for baseball.
“Tennis is a good speed workout, so I can go faster and stronger,” Dorstewitz continued. “Which means I can do better in baseball.”
In the future, Dorstewitz hopes to play as well as his favorite baseball player, Kris Bryant of the Chicago Cubs. Bryant is a professional American baseball third baseman and outfielder for the Chicago Cubs. In 2016, Bryant was named NL MVP and he helped the Cubs win the franchise’s first World Series title in over 100 years.
“He works hard and he is just lots of fun to watch. He has lots of power but hitting wise he isn’t looking for home runs, he just hits the ball hard and he has a pure swing,” explained Dorstewitz.
Dorstewitz enjoys playing baseball at Loy Norrix because the team has good camaraderie and they interact very well with each other. He hopes to play on a higher level in the future.
“I’d like to play in the major leagues, but to do that I need to show the next level, which is college,” said Dorstewitz.
All sports teams will have some bad games and good games. According to Dorstewritz,the LN baseball team is very confident, but they’re still getting stronger each year. His best memory of the baseball team was during his sophomore year when they won a game that everyone thought they would lose. It was Loy Norrix against Gull Lake in the playoffs, and they made the final out.
“As we beat Gull Lake against all odds, and it was a shutout, our dugout exploded, and we sprinted onto the field and celebrated the win as we were going to play on,” said Dorstewitz.
No one else thought they would be able to beat Gull Lake, but hard work payed off for the baseball team.