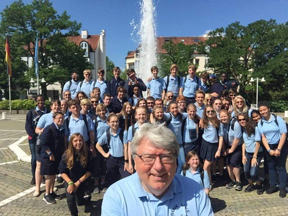 
Taking a deep breath and tightening the grip on her flute to steady herself, sophomore Jaelyn Anderson waited in line with many others to audition for Blue Lake’s European tour.
“The audition was nerve-wracking, but it helped watching my little brothers running around,” said Anderson.
Blue Lake is a fine arts camp located near Twin Lake, Michigan, that spans 16 hundred acres. The camp offers many programs, including a summer tour across Europe for band students. Being accepted into the tour gives students from all around the U.S. the opportunity to travel while playing in different concerts and festivals for three or four weeks in six or seven communities in two to four different countries across Europe.
Once the audition was over, all Anderson could do was wait to hear if she had gotten in or not. After weeks of checking the mail daily and pestering her mother when she got home, Anderson received her acceptance letter for the tour.
Being accepted into the tour meant that Anderson was expected to learn and perform over 40 different songs. While on tour she played in a variety of different venues, indoor and outdoor, ranging from fifty seats to several hundred. In Greifenstein, Germany, Anderson and the other band members performed in front of an old brick tower. Looking into the audience she saw many unfamiliar faces, but they were all cheering in support.
“Our host families that we stayed with were always in the crowd watching us,” said Anderson. “Sometimes they would have little kids, and they would make signs and stuff.”
While touring through Europe last summer, Anderson stayed with several different host families. However, she will never forget her time in Germany when she walked up to a grey castle the size of Loy Norrix High School and was greeted by a couple and their four small children. Throughout Anderson’s stay there, she and the children played hide and seek between the walls and explored hidden passageways.
“I got to bond with the kids,” said Anderson. “Even though there was kind of a language barrier, we still understood each other.”
Anderson got a huge taste of Europe in her short time there. She experienced what it was like to get out of her comfort zone and travel to completely foreign places. She left the safety of her home and family, and had to navigate through new languages, cultures and people she knew very little about.
When asked about her feelings on traveling she replied that it was unforgettable and would recommend it to everyone.
“You see things differently when you travel all over,” said Anderson.
Delete Image
Align Left
Align Center
Align Right
Align Left
Align Center
Delete Heading