From Kampala To Kalamazoo: Robert Ssebugawo Brings A New Perspective To Loy Norrix 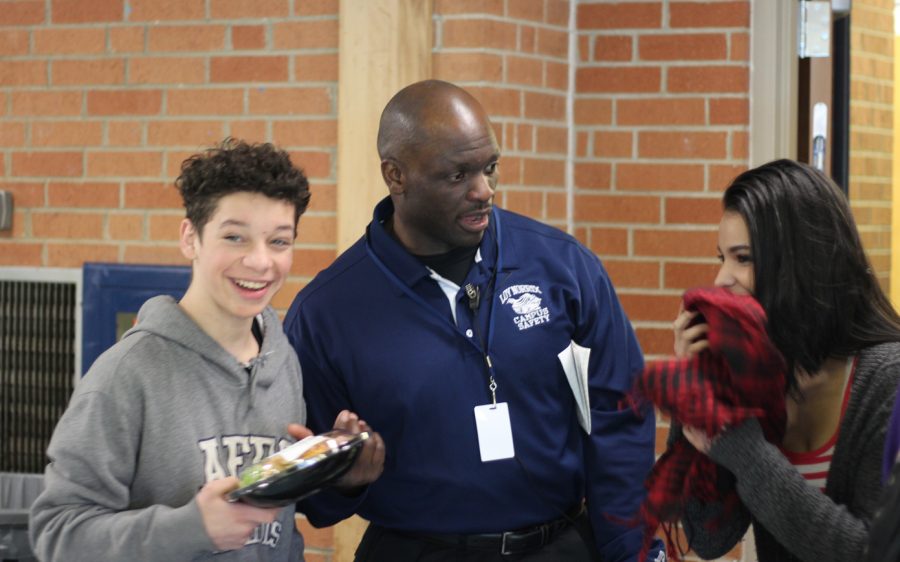 Ssebugawo can be seen joking with students. He makes it his goal to make students feel comfortable and welcome at Loy Norrix. Photo Credit / Rachel Zook

After spending nearly four years here at Loy Norrix High School, it’s easy to forget how many people are around me that I have never met. Sometimes I think that I get so wrapped up in my own life and the lives of my friends that I forget that there are countless other lives going on around me, each that belong to people with unique perspectives and captivating stories to tell. That being said, it’s not every day that I get the chance to meet someone who is exceptionally interesting. Fortunately for me, I had the opportunity to meet one of Loy Norrix’s security guards, Robert Ssebugawo.
Coming from California and originally hailing from Kampala, Uganda, Ssebugawo came to Michigan with his wife and two sons. Soon after arriving, Ssebugawo became a security guard here at Loy Norrix, a position that he sees as a stepping stone of sorts to fulfilling his ultimate dream of becoming an educator.
“My future goal is to become a global youth educator so working here I could learn more about kids’ behaviors, desires and passions,” said Ssebugawo with passion.
After sitting down with him and listening to the way he talked about education and connecting with kids, it was easy to see that working with young people is his passion. I was surprised by Ssebugawo’s plan, as I had never considered a security guard position as a transitional stage into being an educator. However, after hearing Ssebugawo’s vision, I became a firm believer that becoming a security guard is a great way to gain a comprehensive understanding of kids and their behavior in preparation of becoming a teacher.
“When I go there [to Kampala] I helped to mentor the students to show them a bit of direction in life,” said Ssebugawo.
In addition to his position as a security guard here at Loy Norrix, Ssebugawo is also a bodybuilder and was a volunteer at the University of Southern California’s 2013 World Health Day LA. Ssebugawo is also a published writer, and he currently has two novels available for purchase online, “Living & Inspiring Poetry,” and “Love Is a Journey.”
Learning about the differences between life in Michigan versus life in Uganda was a very interesting experience. Contrary to popular belief, things aren’t all that different.
“The students in Kampala focus on fulfilling their human potential which is the same message I try to tell the students here because discipline comes with responsibility and there’s no way to achieve anything without discipline here as well,” said Ssebugawo.
Ssebugawo says the adjustment was not as difficult as one might think and that there are many more similarities than there are differences.
“The easiest way to deal with kids or any human being anywhere is to be friendly because that’s the best way for them to trust you to come to you with their problems,” said Ssebugawo.
The ability to meet such worldly people at my own school and learn about the differences and similarities between such divergent cultures and societies is something that I believe is unique to Loy Norrix and I am very grateful for that.