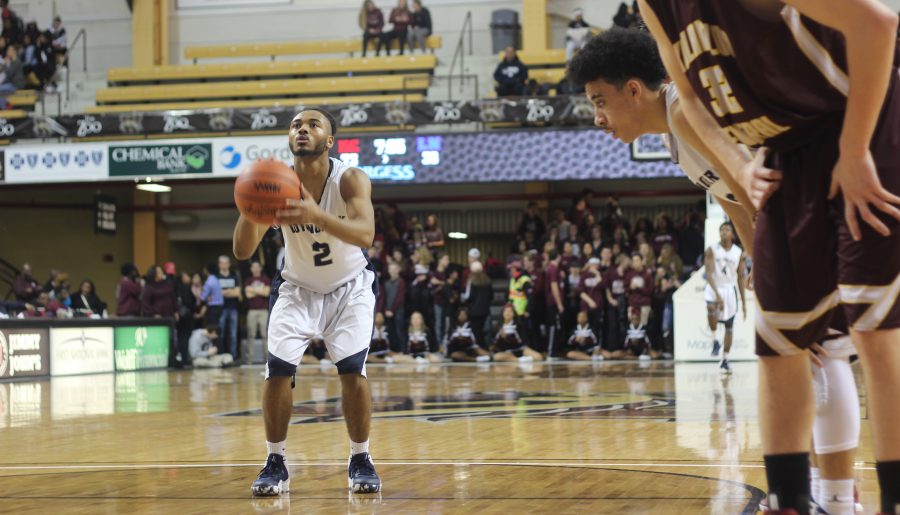 Senior Takary Dreams stands at the free-throw line during the basketball game against Kalamazoo Central on Friday, January 20th. Dreams is a former Giant and faced old teammates during the latest matchup of the rival schools. Photo Credit / Michaela Whalen

“We had an amazing season with a lot of improvement. Everyone on the team got to know each other really well. I’m very proud of how the season ended,” said senior cheerleader Brittany Day.
The cheer team had a tough season with a record of 2-10. The team practiced everyday and put forth their best effort in every competition. They’re hopeful that next year will bring more members and a stronger team.
Basketball Team

“This season was a little disappointing but at the same time we are all having fun and growing a lot. One thing that would make the season better is if we won a little more,” said senior basketball player Delano Swift.
Swift came to Norrix at the beginning of his junior year from Waverly High School. The basketball team’s record is 3-16. Their season ended on March 6, 2017 in the first round of districts to Battle Creek Lakeview.
Hockey Team

“The season was very extraordinary, especially when we won the league title for the first time ever in program history,” said senior hockey player Jacob Remelius.
Remelius is one of the captains on the Kalamazoo United hockey team. Their season ended on February 27, 2017, with an outstanding record of 22-3-1.
Swimming Team

“We worked really hard and we ended up coming out with the win at conference for the first time in Norrix and KPS history,” said sophomore Isaiah Hobson, a Norrix swimmer.
Hobson is a second year swimmer who admired how the seniors led the team. Hobson swam the 50 freestyle and the 100 freestyle. He looks forward to next year and hopes to lead the team to another conference championship.
Wrestling Team

“Wrestling was a real blast this year. We had a lot of fun but at the same time improved and got better towards the end of the season,” said junior wrestler Kalen Robinson.
Robinson’s record this season was 13-12. Robinson has been wrestling since he was in 8th grade and can’t wait for his senior year to lead the team.
Delete Image
Align Left
Align Center
Align Right
Align Left
Align Center
Delete Heading