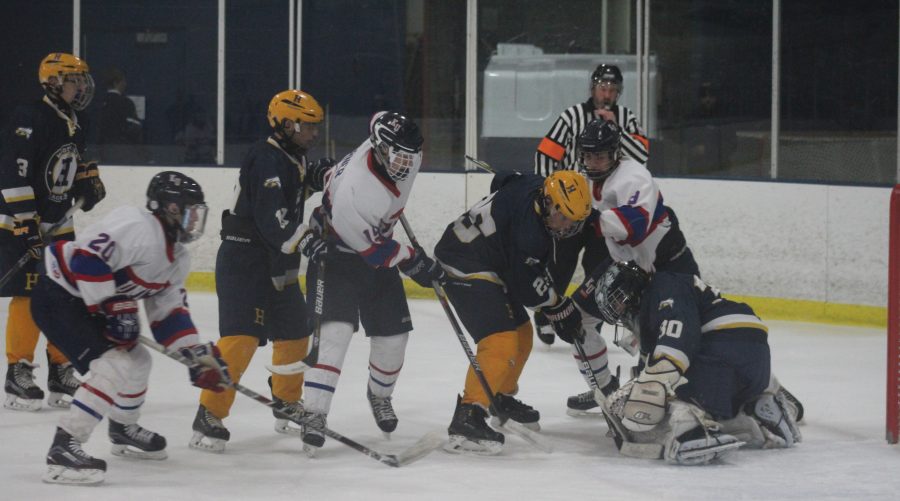 The smell of ice, mixed with sweat, colored under the glare of fluorescent lights, a scene any hockey player knows all too well, especially a Kalamazoo United (KU) hockey player.
Since its founding in 2000, KU hockey has been primarily associated with its negative records and continuous losing seasons. However, in the last two years KU has turned their skating style around, and a once losing team has created a name for itself seemingly overnight. As the winter slips into spring. Let us take a moment to reflect on the hard work and outstanding season of our very own KU hockey team.
At the beginning of this season KU had already come off of one of their best seasons yet.
The 2015-2016 season saw a greater level of player and team success that had been seemingly unheard for United in the more recent years, with a season record of 15 wins and 16 losses. Fans and families were finally excited and packing the stands to watch the joint school team take the ice.
The 2016-2017 season, new records were for with KU winning the Southwest Michigan High School Hockey League (SWMHSHL) championship against their rival Mattawan, finishing their season with a record of 21 wins, 4 losses and one tie game. A very impressive turnaround for the team with a legacy of loss.
“In the beginning it wasn’t fun, my first year we won like six games,” said senior Jake Remiulius, a right defenseman from Loy Norrix. “The past couple of years have been better.”
As Remilius described, these couple of years have seen more wins by KU than ever before, including the first time the team ever won SWMHSHL when they beat Mattawan High School 3-2.
Remelius, who is credited for two assists in the Championship game described it further.
“I was speechless, probably one of the best games I’ve ever skated. The atmosphere was crazy, the fans were crazy,” said Remilius.
Michael Schirripa, a left defenseman, and his brother, Anthony, both from Kalamazoo Central, skated for KU for their third year this year.
“To finally have a winning season after years of losing feels really good. I’m just glad we had a chance to turn our past around, and now we have made history,” said Schrippa.
Both Michael and Tony have been skating with United since the 2014-2015 season, their freshman year.
“This season I have made miles of improvements, and I feel like next season I will do even better,” continued Schrippa.
Both of the brothers have bore witness to the improvements and changes in every aspect of the team over the past two years.
“The fans were way different this season, because now we actually had a student section compared to other years,” said Schrippa
As compared to other years, the training became far more rigorous to prepare the team to deal with the higher level of competition, hard work, dedication and practices long before or after the sun has touched the horizon. All the work seems to have payed off in every aspect of the game.
“I just kept telling myself, ‘this is for you to get better. You just gotta put your mind to it,’” said Schirripa. That’s how the Schrippa, his brother, and many other players motivated themselves to put in the work. That earned them the reward of a satisfying season.
“They worked really hard. They’ve really picked up their compete level in the past couple years,” said Coach Tyler Kindle. This is Kindle’s third year as a coach for the Kalamazoo United team.
“The guys had a great year, they came to work constantly,” said Kindle. “It was great to walk away conference champions, which has never been done before, it was really great.” Coach Kindle holds his team in place of great pride for their season.
“Congrats, enjoy it, not many teams get to win conference titles, and they did an amazing job all year. My two seniors at Loy Norrix were a huge part of the team they were great out there. They put heart and soul into the team, and have a lot to be proud of,” said Coach Kindle
However, beyond the immediate cause for celebration, coach Kindle held pride in the win, due to the sense of hope it gives for the future.
“It’s a great motivator to keep things going, to help keep interest and keep the program going,” said Kindle.
Walking away with even bigger skates to fill next year, KU has turned around a history of losing into a future of pride.
Delete Image
Align Left
Align Center
Align Right
Align Left
Align Center
Delete Heading