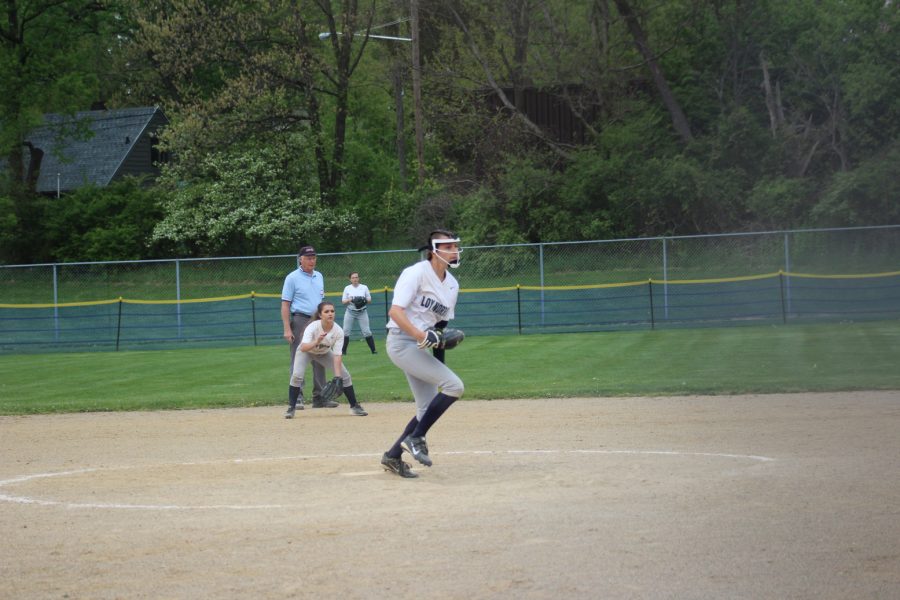 Junior Jess Boer pitches during Loy Norrix's double header against Mattawan. They lost both of their games, 20-0 and 11-2. Photo Credit / Bailey Handley

When a team graduates nine seniors, the opportunity arises to fill positions with players who have a coachable attitude and the will to win. This situation also gives coaches the chance to try players out at different positions to see which one fits them the best. This happens to be the case for head coach James Johnson and the Loy Norrix softball team.
Coach Johnson was an assistant coach for the team last year and is a history teacher at Loy Norrix. He was named the head coach this year and is very excited to finally fill that position.
“I am very proud to be the head coach. I love teaching, but coaching is kind of my passion. It’s been a big honor to have this job,” said Coach Johnson.
There were some uncertainties about the team before the season started, but they managed to work it out.
“We had a lot of girls to replace from last season, so I didn’t know numbers-wise how we were going to stack up this year compared to last and if we were going to have enough girls for a varsity and junior varsity team,” said Coach Johnson.
Hailey Timmerman, senior and co-captain, pitches and plays centerfield for the team. She has been on the varsity team since her junior season and had goals set for the team from the beginning of the season.
“We have been growing as a team since the beginning of the season and have made it a goal to have better communication between the infield and the outfield. We also have been working hard to have a better record this year than we did last year,” said Timmerman.
Julia Townley, senior and co-captain, has been on the varsity team ever since she moved to Loy Norrix her sophomore year. Townley is one of the most experienced players on the team, so she can be helpful for the younger players on the team when they need advice and constructive criticism. She is impressed with the team and the strides they have taken this season.
“We are getting better as a team every day. There will always be things that we can work on but we have been growing as a team since the beginning of the season,” said Townley.
Townley is also impressed with the team’s attitude towards a new season that consists of a lot of first-time varsity players.
“Our team’s attitude and positivity is so much different this year than it was last year. We have a lot of new girls that were excited for the season to start and have been focused on working hard,” said Townley.
The third co-captain, junior Lauren Johnson, has been on the varsity team since her freshman season. As the team’s catcher, she is a brick wall behind the plate and only lets a small portion of balls past her. Johnson likes the resilience that this year’s team possesses.
“The most impressive thing about this season is our ability to overcome. We’ve had some challenges but we’ve pushed through them as a team,” said Johnson. “We work through our struggles together, not just as individuals. There’s a lot of support for each other all around.”
Since Johnson is a junior, she still has a whole season of high school softball left. The team is in rebuilding mode, so she’s excited to see what next season brings.
“We’re still a relatively young team, so the experience from this year is really going to help,” said Johnson. “There’s also some talent coming up from the middle schools that I’m really excited about.”
The softball team is currently 12-22 overall and 4-14 in conference play. While it may not be exactly how they wanted the season to go, it shows this team has high hopes for the future. They are only two wins shy of tying last year’s win total, which is very impressive, seeing as they had to fill nine spots on the team. Coach Johnson has only good things to look forward to for his team’s future.