Loy Norrix Athletes Sign to Compete at the Next Level 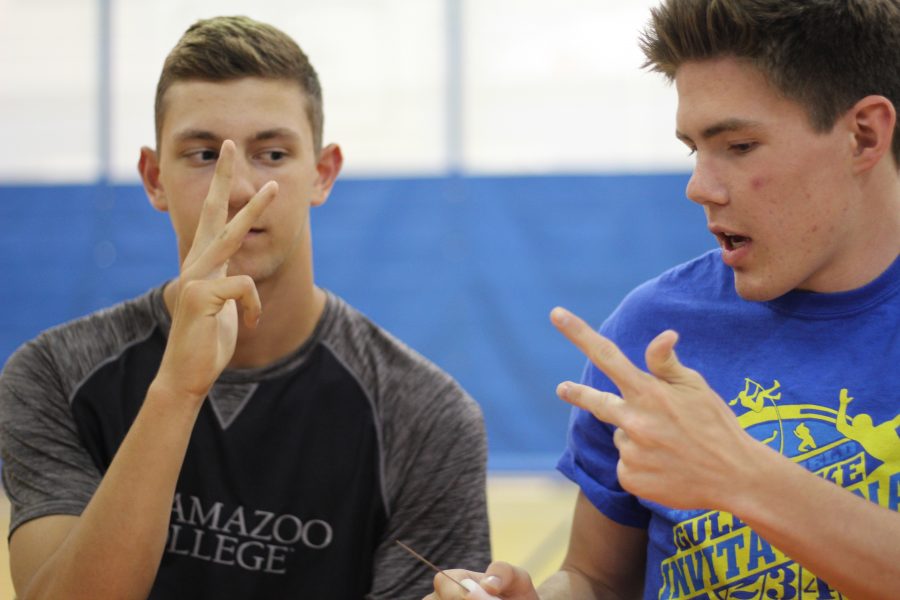 Tony Dougherty and Ryan Ross try to figure out how to make a K for K College, the swimmers will continue to swim together on Kalamazoo College’s swim team. “I chose K, one, because I got accepted but, two, because I really felt at home at K. I know it’s still in Kalamazoo but I feel like I can still be on the campus and away from home, but it is still here and that’s nice but I really love the campus and I love all that K has to offer,” said Dourgherty. Photo Credit / Griffin Conley

At Loy Norrix, athletes who were moving on to play their sport in college used to have individual signing days which were held in the main hall conference room. This year was different. Signing Day was one big event held after school, with all the athletes that were signing in attendance. The decision to combine all signing events was easy to make this year due to last year’s individual signings taking up so much time because of the large number of athletes.

“Last year there were 22 [athletes that signed] so, we stopped [hosting them individually]. It was too much class interruption for one or two kids,” said Loy Norrix Athletic Director Andrew Laboe.

Many supporters were in attendance and the feedback for switching Signing Day up was positive.

“We got good feedback from it. Kids liked it,” said Laboe. “What we are going to do next year, I haven’t decided yet but it was just feeling it out and trying it.”