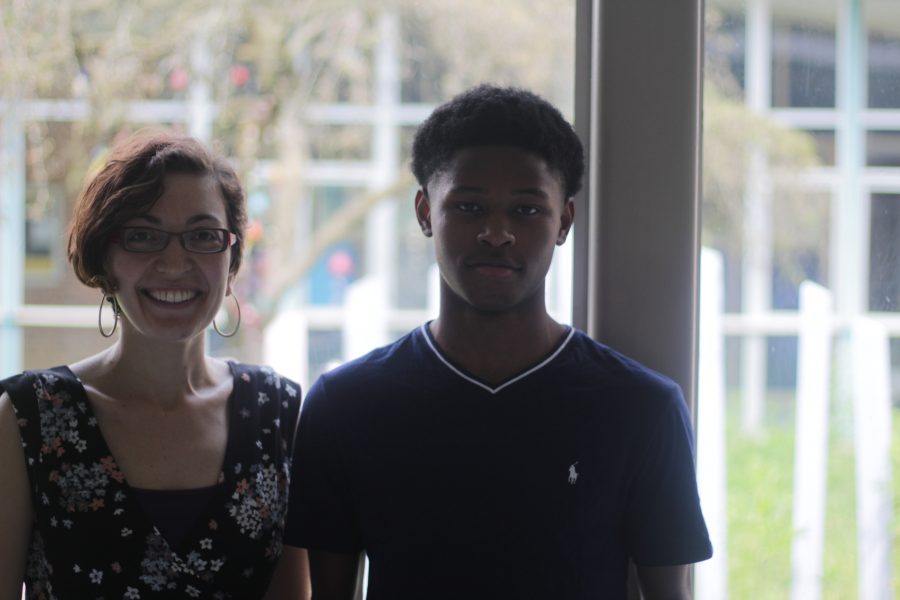 
“How can I give you my pain when it’s all I’ve got left?” said Loy Norrix junior Ardriques McFerrin as he read over one of his old poems.
Poetry is an outlet for many, but for McFerrin it’s a way to not only express himself, but also a way to receive recognition. His poetry has earned him multiple student of the week awards in Lisa Jensen’s English class, as well as recognition from his teachers and peers. McFerrin’s writing also won him a slot in February’s Student of the Month lineup.
“I was shocked,” recalled the talented McFerrin. “I’m not really used to awards, it was really nice to be recognized for something I worked hard on.”
Student of the Month is a prestigious award here at Loy Norrix. Only ten students get selected a month, which forms an elite group of bright young minds by the year’s end. 1,530 students attend Loy Norrix according to Us News. Only 5.8 percent of the student body can win Student of the Month in one school year, assuming there are no repeat winners, which McFerrin is.
The first time McFerrin won Student of the Month, he was a sophomore, and there was no poetry involved. It was for his positive attitude and gregarious personality, not usually two characteristics of a poet whose main focus while writing is pain, which shows you his creativity.
“[Ardriques is] an amazing young man with a ton of potential,” gushed Loy Norrix Government and College Readiness teacher Jay Peterson, who has impressively won multiple Staff Member of the Month awards. “He always has a positive attitude and a great sense of humor.”
In February, McFerrin had second hour English with teachers Lisa Jensen and Anna Gutman. He was already a good student, but he separated himself from the rest of his classmates during the poetry unit. From volunteering in class to helping out when there was a sub, and of course the grade A poetry, Ardriques became a class favorite. He claimed Student of the Week regularly, and was nominated for Student of the Month by Ms. Jensen, which he won.
“You’re such a talented poet and a respectful student in class,” McFerrin read over one of the Student of the Week awards that Jensen wrote him, as a smile formed across his face. “I’m happy to be your teacher.”
Ardriques formed a great teacher-student relationship with both Jensen and Gutman, and has a special admiration for them.
“They’re the nicest ladies in the world,” claimed McFerrin, believing in the illustrious statement he’s made.
Dr. Bob Nelson is seen as an expert on employee engagement, recognition, and rewards, as well as a best-selling author and powerful motivational speaker. He’s the co-founder of Recognition Professionals International, and has sold over 4 million copies of his books about the importance of rewards and recognition.
“You get the best effort from others not by lighting a fire beneath them, but by building a fire within,” said Nelson.
Whether the fire that is a Loy Norrix Student of The Month award is lit beneath or inside of him, McFerrin hopes to stay motivated. Whether or not it’s the influence of the rappers’ quotes on his manilla colored folder or perhaps real life experiences, there’s no question that Ardriques Mcferrin is a talented poet.
Delete Image
Align Left
Align Center
Align Right
Align Left
Align Center
Delete Heading