Starting Over: Student Finds Pleasure In Moving To A New School 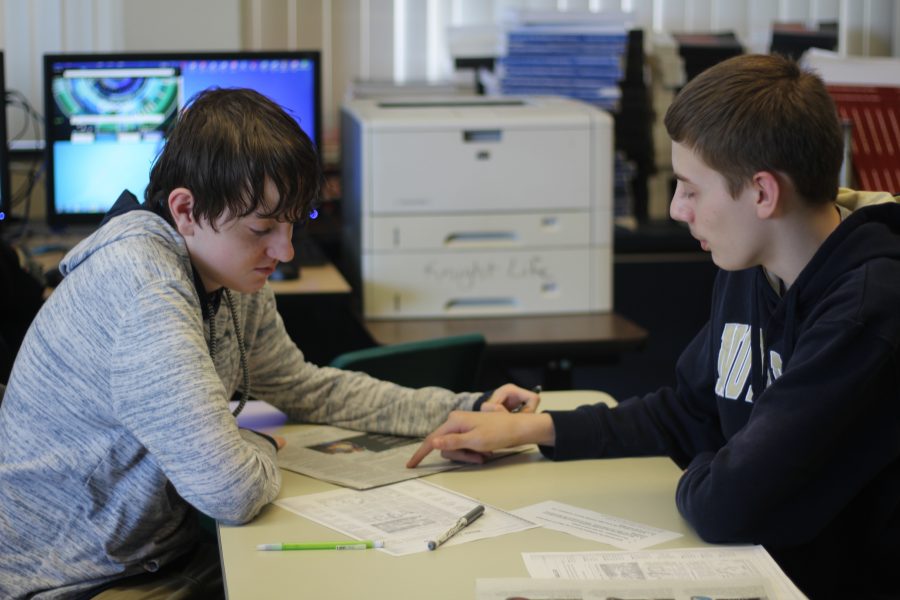 Classmates Brandon Schnurr and Hunter Sandt work on a newspaper newspaper project in Jounalism. Brandon and Hunter have known each other for about two years now and become good friends. Photo Credit / Breyana Wilson


Moving from a different school can be a difficult task for many young adults in America. Being placed in an unfamiliar environment with students and teachers you don’t know can become stressful. Hunter Sandt, who is now a freshman at Loy Norrix High School, experienced this exact thing. Sandt transferred from Paramount Charter Academy to Maple Street Magnet School for the Arts in the fall of 2015, which was his 8th grade year.
“I moved because I wanted something more challenging,” said Sandt.
Paramount Charter Academy is not a KPS school, however many of their students eventually attend KPS school to complete their high school careers.
According to US News “More than 2.9 million children attended charter schools last year – around 6 percent of the total students enrolled in all public schools across the country.”
Sandt attended Paramount Charter Academy K-7th grade and explained his time there to be a lot stricter.
“At Paramount nobody really acted up. Everybody kinda just was quiet and did their work,” said Sandt.
According to Start Class by Graphiq, “Paramount Charter Academy has 481 students enrolled in it’s K-8 program.” Due to the low overall enrollment rate, Paramount does not offer a variety of classes to it’s students, which Sandt disliked.
When Sandt started to attend Maple Street it didn’t take long for him to become accustomed to the swing of things. The environment of Maple Street was very different from Paramount in Sandt’s eyes.
“At Maple there was a lot more going on in each and every class, partly because there was more people than at Paramount. [Also] because they offered more of a variety for what you did in each class,” said Sandt.
He enjoyed the class schedule he was given by his counselor. Those classes consisted of Basic Design, which allowed him to earn a high school credit, gym, spanish and computer applications.
Sandt had friends that attended Maple Street before he started attending, he also continued to make friends during his time there. This made the transition so much easier for Sandt.
“I enjoyed my time at Maple, especially because I had friends there,” said Sandt.
Delete Image
Align Left
Align Center
Align Right
Align Left
Align Center
Delete Heading