A Shared Love of Playing Soccer 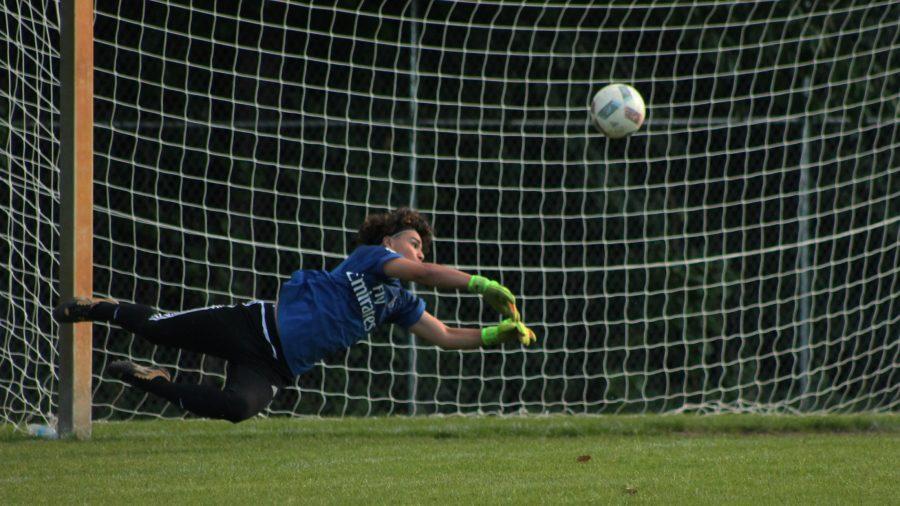 Freshman Carlos Santos dives to block a shot. "Seeing peoples faces when I block their shots gives me the best feeling in the world," said Santos. Photo Credit /Ben Rand

Zach Skinner
Loy Norrix freshman Carlos Santos found love for the game of soccer from his father at an early age.
As a child, his father had him playing in competitive games with adults and created practice regiments for him. Santos was never forced to play, but his father wanted to share his love for the game with his son.
Santos’s father was a pro soccer player in Mexico at the age of 17 on Tigres, which translates to “The Tigers.” His career was cut short after just two years due to a nasty ankle injury. He was not able to return to the pros, but he did decide to start a family.
“My family all plays soccer, it’s a game we love,” said Santos.
Santos and his two brothers now play soccer and have an amazing coach, their dad.
Having been a pro, their father knows a lot about the dynamics of the game and what things should be done to get someone to an elite level. He wanted all of his children to be midfielders since they were young. A midfielder is a dynamic position of offense and defense on the field.
Santos didn’t always want to be an astounding soccer player like his father. At one point in elementary school he played football and was more dedicated to that than he had ever been to soccer. He suffered a thumb injury in a football game and quickly decided he no longer wanted to play.
Soon Santos found himself wanting to try something new in soccer, so one day he decided to step under the goal and play. This is where he developed his new passion.
“When I started I was scared of the ball,” admitted Santos.
Who wouldn’t be? According to the website “Reference” professional soccer players kick the ball at up to 70 mph while attempting to score a goal.
Santos has had many coaches throughout his career up until now including various club coaches, camp coaches, and his father. His father is the main coach in his life, and he feels like he learns the most from his father. His father is very good friends with Santos’s club coach, Omar, and they work together to help him progress.
Santos brought his love of soccer to life in his past few years of playing and has made great improvements.
Santos and his team made it to state cup at the beginning of his 7th grade year. In the semi-final game he was blocking a shot and suddenly felt a sharp pain. He had come down on his leg wrong but could still move. Not realizing the severity of his wound, he kept playing through the pain, not wanting to let his team down. By the time the game was over, he was on the ground in immeasurable pain, unable to move and had to be carried off the field by his coach. He found out soon after that he had torn his ACL and couldn’t play soccer for 10 months. He described the pain of physical therapy as “nearly unbearable,” and said, “I didn’t know if I would play again.”
After the seemingly endless pain he went through, he returned this fall to play soccer for Loy Norrix High School. He made the junior varsity team. As the year progressed and Santos got back into the swing of things, his coaches began to see how good he was. There were points in the season where Santos was brought up to play varsity team. Although he expected to be a bench warmer, he was placed in the starting lineup.
“Carlos helped us a lot throughout the season,” said Loy Norrix sophomore and teammate Naashar Leake. His teammate said that he helped the team a lot and they couldn’t have accomplished what they did without him.
“I still have plenty of room to grow and plan on giving soccer my all through the rest of high school,” said Santos.
Santos and his father fight often during practice, but he says one of his favorite moments in soccer was playing in and winning a tournament called the Mexican Cup with his father. He doesn’t know exactly where he will end up with soccer, but Santos hopes to follow in his father’s footsteps after high school and become a pro player.