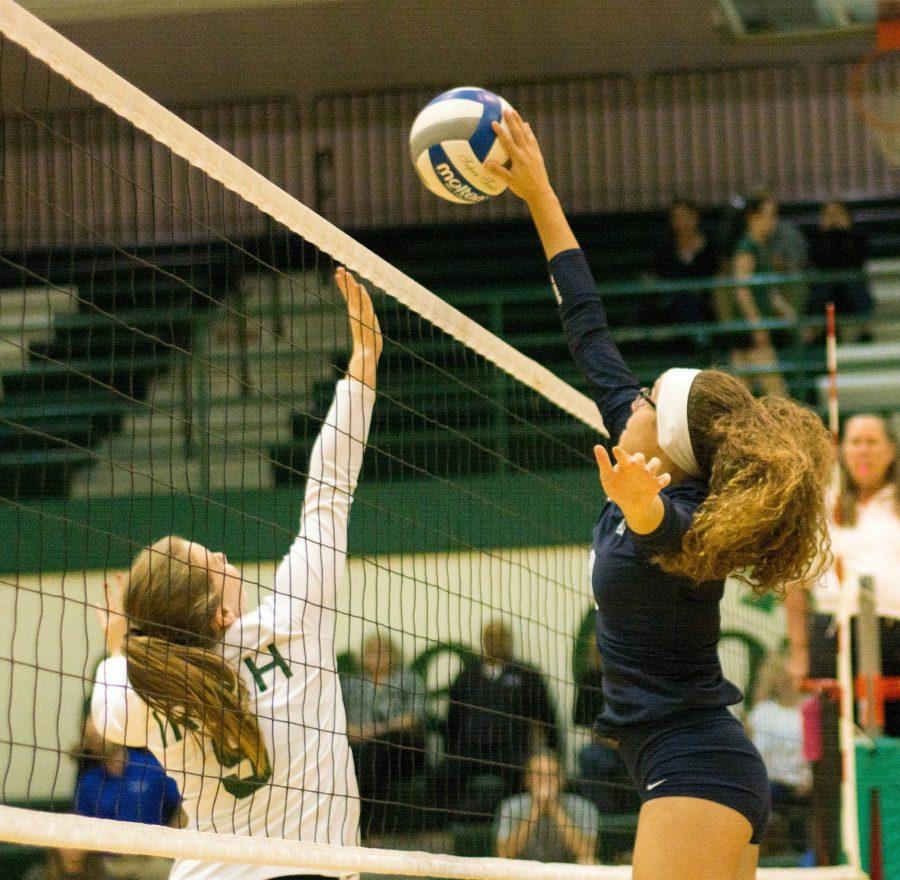 Junior Sierra Knight us pictured tipping the ball over the net earlier than anticipated. The Knights spent their season focusing on their offense, specifically at the net. Photo Credit / Paul Guimond

Three Loy Norrix High School students have faced and overcome minor injuries that have affected their fall sports seasons. Although the injuries were detrimental to their playing for a period of time, the student’s recovered from their injuries with minor long-lasting effects.
Stoken Strained In Game


Senior Hunter Stoken plays wide receiver on the Loy Norrix Varsity football team. He has dealt with a strained calf muscle in his left leg for several months due to multiple falls.
The calves are made up of two long muscles on the back of the shin bones.
According to Football Rescue, strained calves are very common in football due to the extreme force put on the calf muscles, which stretches them beyond their capabilities.
When a calf is strained, the small muscle fibers that make up the calf tear, then blood fills the wound and create pain. Scar tissues then fill the new injury/hole in the muscle, and in a sense, pulls the healthy fibers together.
Stoken’s strain began in the summer of 2017 when Hunter jumped a fence and landed on his leg wrong, but he didn’t give his calf too much attention. The following sprain happened two weeks into the football season when Stoken got picked up and dropped, landed on his leg wrong once again, and the injury worsened.
“As soon as I hit the ground I felt a sharp pain in my [left] calf and I couldn’t get up,” Hunter said.
As a result of Hunter’s sprain, he was unable to practice or play for three weeks.
“I don’t have the ability to perform basic movements such as running, sprinting, and jumping,” Hunter said.
This strain has had a huge impact on Hunter’s varsity football season, which prevented him from playing for three weeks.
Sierra’s Swing Suffers

Junior Sierra Knight plays on the women’s varsity volleyball team as an outside hitter. She suffers from a tight rotator cuff due to excessive hitting without proper stretching.
“I went to the athletic trainer everyday to prevent it from getting worse, and I’m just happy that I didn’t have to limit my playing because of it,” said Sierra.
According to Healthy Living, the rotator cuff is a network of muscles and tendons that join the shoulder joint together.
The repetitive movements of swinging your arm to serve, spike and set can irritate both the nerves and soft tissues around the shoulder leading to pain, tenderness, and limited range of motion.
Sierra’s injury started affecting her hitting on August 30, 2017 while at a quad at East Kentwood High School.
In the middle of her third game against East Kentwood, Sierra started to feel a sharp pinch in her right shoulder. This soon developed to an inability to fully swing her arm while hitting. Sierra was taken out of the game to sit the bench for the rest of the night.
“I was feeling helpless because I wanted to play and be a part of the team but couldn’t. Then I realized that I didn’t have to be playing to be a part of the game,” said Sierra.
To treat and prevent Sierra’s tight rotator cuff she heats her shoulder for five to seven minutes before practice and ices her shoulder after practice for fifteen minutes every day.
“When playing sports it’s very important to properly stretch before games so there aren’t any injuries during or after a game,” said Sierra.
Carlos Strains the Game

Sophomore Carlos Santos is the goalie on the men’s varsity soccer team. Carlos tore his right ACL when he was in sixth grade and four years later experienced a similar feeling while playing Battle Creek Lakeview on October 3, 2017.
“I felt scared but I also felt selfish and didn’t want to come out of the game, so I kept playing until my coach pulled me out. Once I got pulled out, my knee was in a lot of pain and I thought that I might of fractured something, but thankfully, it wasn’t major,” said Carlos.
The Anterior Cruciate Ligament (ACL) is one of the four main ligaments within the knee that connect the thigh bone to the shin bone. The ACL’s purpose is to prevent the shin bone from sliding out in front of the thigh bone, and can be injured by a sudden deceleration or landing maneuver with the leg in a vulnerable position.
According to MedicinePlus, ACL injuries are one of the most common knee injuries among athletes. ACL injuries are very common because the ACL is in a vulnerable place within the body, as well as lots of strain is put on the ACL.
“If the calf muscles are not absorbing the force, and if the knee is not in the proper position, the knee buckles, and tears the ACL,” said Dr. Boden from MedicinePlus.
While Carlos was playing Battle Creek Lakeview, he was kicked in his right knee and was taken out of the game. His whole leg was very swollen and became badly bruised since then. Carlos was out for a week and missed one game.
Although Carlos only has a bruised knee, his parents are concerned that due to his history of injuries, this could spark problems with his right ACL.
“My mom was scared because I’ve already torn my ACL, and she doesn’t want anything else to happen to me,” said Carlos.
When Carlos originally tore his right ACL, he was out for nine months. He had to walk with crutches and couldn’t play any sports. He had to go to physical therapy twice a week to re-learn how to walk.
“It [was] like learning to walk all over again. I had to slowly start moving, at first I had to use a cane and crutches, and slowly I began to be able to walk again,” said Carlos.
As a result of Carlos’ torn ACL, he sometimes experiences a tingling feeling in his knee, and it’s painful for him to land on his leg after jumping in the air to block a ball from entering the goal. He now has less flexibility and pain occurs when he tries to fully extend his leg.
To prevent any further injury, Carlos takes a pain reliever and goes to the athletic trainer every day to get stretched out and ice his knee. Carlos also takes ice baths after practice and goes to physical therapy twice a week.
Although these students have mostly overcome their injury physically, they still deal with some challenges to their playing ability as a result of the injury. Professional and student athletes live in fear of an injury, as it can mean the end of their sporting career.
“I didn’t think that I would recover and be able to play soccer like I used to. I’ve seen professional players not come back from injuries like mine, and I was scared that would be my story,” said Carlos.
Delete Image
Align Left
Align Center
Align Right
Align Left
Align Center
Delete Heading