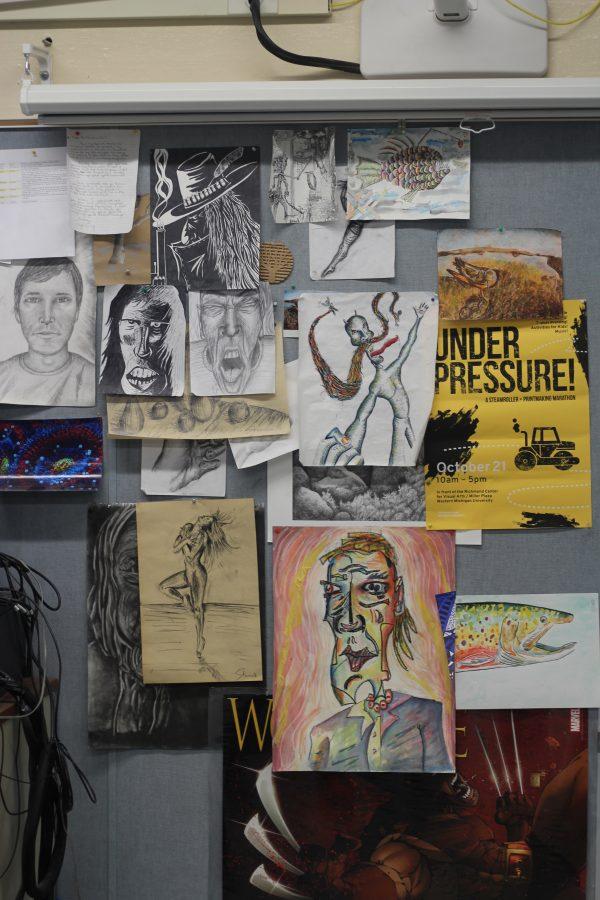 The AP Art room is silent with only the sounds of pencils scratching on paper and the overwhelming feeling of focus as students hunker down to work.
The cartooning room, on the other hand, is booming with laughter and ideas being bounced from peer to peer on what to draw next. Should they draw another yokai, or doodle and see what that leads to?
The final class of the day, ceramics, has a talkative, but quiet atmosphere as students diligently sculpt and mold the clay to their will, while joking and talking with their tablemates.
Loy Norrix High School offers a variety of art classes that include cartoon drawing, functional ceramics, Advanced Placement Art and more. All of these classes provide the opportunity to creatively express yourself via a variety of artistic mediums. In doing this students gain various art skills, such as drawing and painting. Each class provides a place for students to get covered in marker ink, paint, clay and whatever other medium explored.
Greg Stevens is one of the Loy Norrix art teachers and he currently teaches AP Art, functional ceramics and cartooning. In the 2nd and 3rd trimesters, he will be teaching drawing and watercolor painting.

Stevens grew up in Sturgis, Michigan, and later received a degree in advertising from Western Michigan University. Stevens decided that he wanted to go into art education instead and switched majors, graduating with a degree in art education.
“I kinda thought it would be a more interesting job because a lot of advertising jobs are nine to five cubicle jobs,” said Stevens.
After having some difficulty finding a job in art education, Stevens pursued another one of his passions, outdoor education, for the following six years. He moved out to Telluride, Colorado to teach cognitive dissonance for a Telluride nonprofit, which puts students outside of their comfort zone and allows them to problem solve through a situation and gain self- confidence.
Stevens later went to grad school at Indiana University for experiential/outdoor education. After grad school he moved back to Kalamazoo and worked for Northeastern Elementary before he was happily transferred to Loy Norrix.
Debuting as the new AP art teacher, Stevens’s students sign up for the chance to gain college credit for their art. Students choose if they want to build a 3D, 2D or drawing portfolio and then create pieces around that. A 3D portfolio consists of 3D pieces, such as pottery or sculpture pieces. A 2D portfolio focuses on a how a student uses the elements of design to create artwork and can include digitally created pieces. A drawing portfolio is more focused on artistic skills in terms of drawing, shading, and the use of negative space. The class consists of students producing 24+ works of art based on what type of portfolio the student chooses, and they later send their work to the AP Board to be evaluated.
“They [the students] choose which direction they want to go in,” said Stevens.
To help speed the process up, each AP art artist is required to produce a few pieces of art over the summer before the school year starts. Then each portfolio is divided up into 3 sections: the concentration, breadth and selected works.
The selective works (quality) section consists of sending five pieces of their artwork into AP board to be judged in person. The second section is called concentration, where they take 12 works and connect them all with a visual theme or idea of their choice. The breadth section is dictated by the teacher and allows the AP board to see how well-rounded the artist is. This section also requires at least 12 pieces of art.
Unlike most other AP classes, AP art students don’t take a written test. Instead, each student electronically sends in high quality photos of their 24 pieces of artwork from the concentration and breadth sections, and they choose what they consider their five best pieces to be mailed in and looked over in person by the AP board. Looking over each student’s artwork and scoring it takes several weeks, with a score of 4 or 5 earning college credit, depending on the institution.

“As a teacher, it’s not tedious or boring at all because every single student is doing something new and it’s a way to keep it fresh,“ said Stevens.
Loy Norrix also offers a cartooning class that starts with a focus on static illustration, such as comics and then moves onto graphic novels. There’s a focus on graphic novels because they are often considered the more refined and professional version of comics and use more professional art techniques. Over the rest of the trimester, Stevens includes lessons on the historical aspects of cartooning and illustration, such as its use in political cartoons found in newspapers and other publications.
“We cover everything from the historical aspects of [cartooning] and how it’s been used in newspapers and publications,” said Stevens. “We go all the way through things like anime and how it’s deeply rooted in Japanese culture to yokai, where anime came from, and then transition all the way up to trying to create an anime piece that’s a culmination of everything they’ve learned.”
During the end of the trimester the focus shifts towards popular Japanese drawing styles and students create their own yokai and anime works using all of the techniques they have learned.

If cartooning and AP art didn’t pique your interest, then maybe functional ceramics will.
“Ceramics is probably the most technically difficult class in the school because there is so much knowledge to [learn],” said Stevens.
The first couple weeks are spent learning the techniques of the ceramics trade. Some examples are the pinch pot method, coiling and the slab method. Due to the extensive time it takes to shape the clay, glaze and fire it in a kiln, producing a ceramic piece takes a couple of weeks, which causes students to be all over the map when it comes to their progress.

To keep some unity in the class, Stevens will hold semi-weekly class meetings where students critique their peers’ work and discuss problems that they are facing. The class is a very independent one that allows student the freedom to work at their own pace.
“You have an assignment list that you have to knock out your own and it is very much [a] more autonomous class because of the nature of the beast,” said Stevens.
Each class comes with it’s own unique set of challenges, but all three allow a student to produce some really neat and personal artwork.