Sticks and Stones: How Bullying and Words Affect the Modern Teen 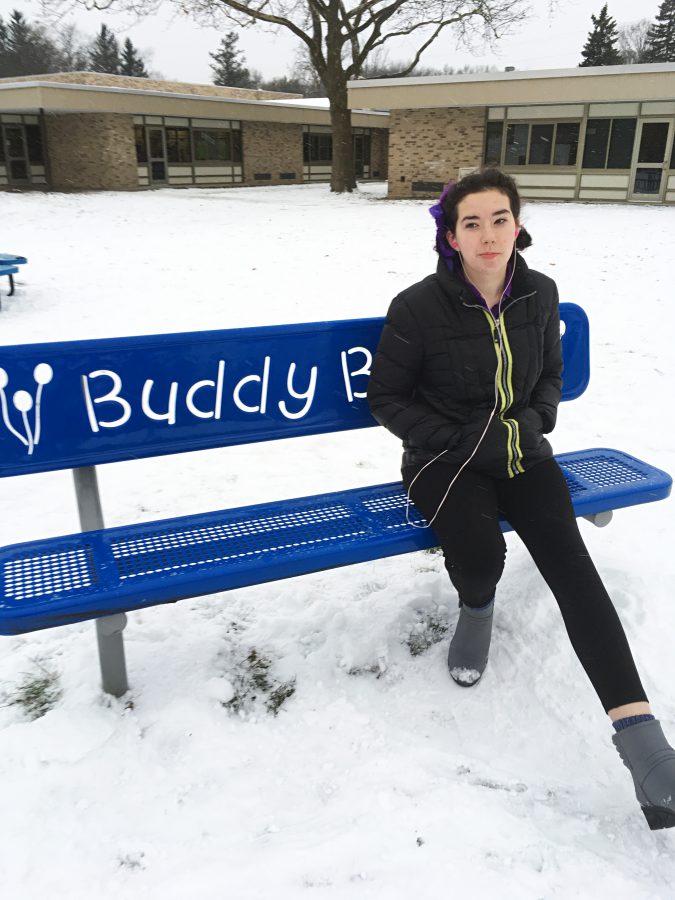 Purple feathers are the first things to draw your eye, perched atop freshman Evelynn Hurley’s head. Her halo of dark curly hair frames her face, and her clothes, flashy but sensible, are only an afterthought to finish off her striking appearance. Her kind face shows no sign of hurt as she recalls the comments she’s gotten over the years about her appearance.
“I’ve been called fat and just not very pretty,” Hurley states matter of factly, “and a lot of people actually have made comments on my hair too, just like, ‘oh, you style your hair like that? What’s wrong with you?’”
Hurley, just like millions of teens in the US, walks the halls of her school on full display for her peers’ thoughts and comments. She is a part of the 3.2 million kids that are affected by bullying each year. Though never alone, kids like her experience daily struggle of facing judgment, feeling like it’s only themselves against the world.
On the outside, Hurley is a self-confident girl who doesn’t care what anyone thinks, but in reality, she’s quick to open up about how she really feels about herself.
“I personally don’t think I look pretty in anything that I wear, but I don’t take very much mind to it,” Hurley said.
Hurley says that a lack of caring goes into her daily wardrobe choices, more than a wanting to look good or unique.
“I wake up in the morning and then I’m like oh! I’m not going to look good, so who cares?”
And just like her, 77 percent of all students in the US are bullied verbally. According to the Megan Meier Foundation, 1 in 4 youths are affected by bullying. Bullying can cause so much hurt and there are so many organizations trying to stop bullying. Even with that, bullying has increased by 24.5 percent since 2003, as reported by the National Center for Education Statistics.
But why do kids bully each other? Is it the same reason world wars start, or why a person is murdered every minute of the day? Does evil just lie in human nature, or does bullying have to do more with the pressures kids face daily, with the stress and competitiveness of school.
“I think that people bully for a lot of different reasons,” said freshman Virginia Abbott. “I think that people bully to make them feel better about themselves, or to get attention and gain popularity.”
And just like Hurley, she’s not immune to people’s thoughts and comments about her appearance.
“People have told me the only nice thing about me is my butt,” Abbott said. “It made me feel like I was an object, like I wasn’t an actual person, like people didn’t care about who I was, they just cared about how I looked.”
Stomp out Bullying reported that “A common reason that a kid is a bully is because he/she lacks attention from a parent at home and lashes out at others for attention.”
But another reason kids tend to criticize and laugh at each other might lie in human nature, more than an unstable home life.
“Humans are very interactive,” explained Hurley, “and we just have to have other people tell us, that we are liked or disliked based on what they think of us.”
Words affect us deeply. Most people are more likely to cry about someone calling them fat, than someone punching them in the face. In some ways, words affect us on a more physical level than violence.
“I went home and I cried for 2 hours without doing anything,” said Hurley, recalling one of her lowest times after she had received a scathing comment about her looks. “And then my parents didn’t get home till later that night so I was just like, hiding in my room, by myself, just crying.”
And while the words spewn during bullying might seem too harsh for kids to hold onto, and many parents would agree that kids should just forget every mean and hurtful comment kids have gotten, Hurley disagrees.
“I do think people should move on,” Hurley said, “but I also think they should take into consideration, like, these are the things people are going to say to you. But it’s up to you to decide what you’re going to do about it.”
Delete Image
Align Left
Align Center
Align Right
Align Left
Align Center
Delete Heading