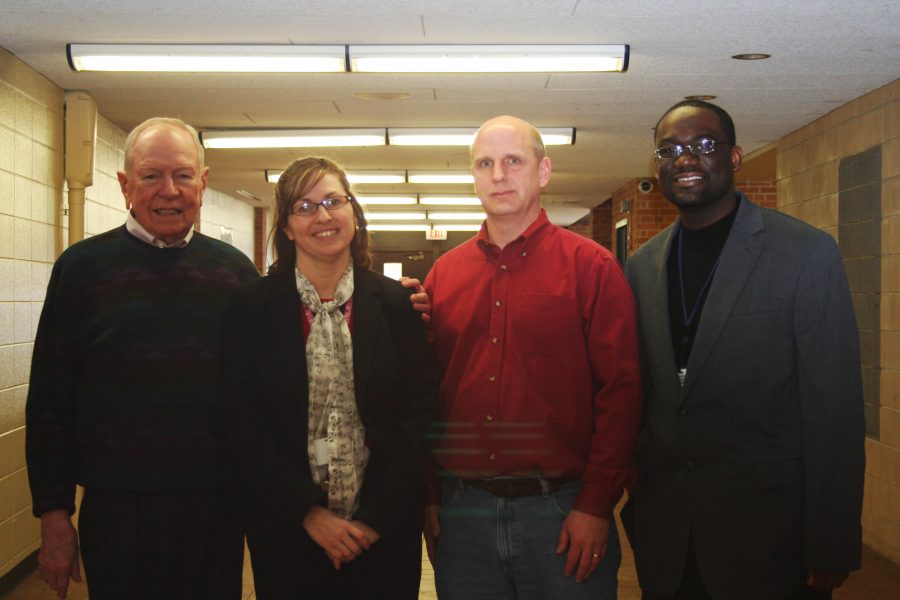 Thomas Kasdorf, Taryn Fooy, Greg Elfring, and Johnny Edwards celebrate the generous donations. The choir plans to use the money for the upcoming play, Footloose.

It all started out with a couple Christmas albums that were put together by Loy Norrix students and now has turned into a fundraiser that supports the Knight’s choir department.

Thomas Kasdorf, the man that Loy Norrix’s auditorium is named after and Greg Elfring donated 1,000 dollars to the Loy Norrix 2012 choir.

To thank Kasdorf and Elfring, the Loy Norrix choir sang for them.

These albums were sold and were said to be the “easiest, biggest fundraiser,” said Kasdorf. The donors did not believe this would be a big fundraiser and definitely not a money maker, but it was something and they just continued doing it in spirit.

As technology increased, Kasdorf and Elfring considered transferring this music performance to DVD’s and somewhat succeeded in doing this. However, the number one seller continues to be the recordings themselves.

After being at the school for years, Mr. Duckett realized, “[The performers] not only liked music, they lived it.”

The donations are hoped to be used for the upcoming musical and future resources that will be used by the choir. The choir itself was very grateful for this generous donation.