Horsing Around: Loy Norrix Student Takes on a New and Unusual Sport 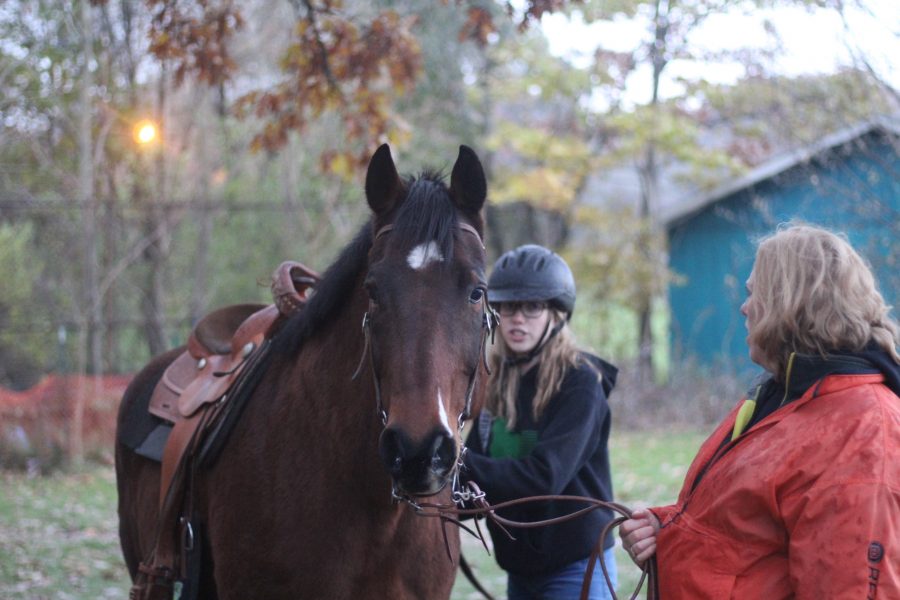 A horse strides into the arena. Elegance and pride ooze from both the rider and the 16 hundred pound animal that the rider appears to effortlessly control. The duo move in perfect unison and precision around the ring.
This scene describes an equestrian event. Equestrian riding is a sport where a horse and a rider compete in various events together. Equestrian riding has been in the Olympics every year since 1912. There are English and Western riding styles which require different harnesses and equipment for the horse. English is a more traditional riding style seen throughout the world. English riders wear simple clean cut slacks and a button down jacket where as western riding is more often referred as ‘ranching style’ and the riders wear glitzy flashy outfits.
Loy Norrix Sophomore Tessa Hertel and Rowdy, her 16 year old American Quarter horse, competed in equestrian events in the Kalamazoo County Fair over the Summer of 2017. They placed 2nd for English riding for the first round then moved to the second round of finals in the grand championships, where the duo placed 8th out of 18 other participants with ages ranging between 13 and 24 years old.
“I got Rowdy about a year ago, but I had been riding other horses all my life before that.” said Hertel. “After previously begging for a horse of my own for as long as I can remember, Rowdy is the perfect partner to compete with.”

Most people don’t consider ‘horse riding’ a sport. In a lot of ways, equestrian can actually be considered just as hard if not harder than any of the other sports people generally participate in. From the responsibility it takes to actually maintain a horse to the physical and mental strain the riders face throughout their season, participating in equestrian riding is no piece of cake.
“I’ve definitely gotten stronger core and leg muscles since I’ve been riding with Rowdy. Where I used to complain and have pains in my legs after a bit of riding, I’ve definitely strengthened my legs and haven’t noticed as many pains,” said Tessa.
Like any other sport, horses and people who participate in equestrian have a designated off season in which athletes take the time off and rest their bodies for the upcoming season. Horses themselves typically grow thicker coats during the off-season, but it’s not all about rest. Every day the horse must be taken out to stretch its legs and keep in shape. Tessa and Rowdy practice at least four times a week during the off season.
“We go out to the stables most every week day to have Rowdy move his legs and to also continue to uphold the bond a rider and horse should share to be able to work together,” said Tessa.
The bond the horse and the rider should share should be primarily based on the trust with one and other. The horse and rider have to be able to work together and be able to compete as a pair.
“It’s all about trust” said Hertel, “If I didn’t know what I was doing, this 16 hundred animal has the potential to crush and kill me. We [she and the horse] have to develop a bond so he knows that I won’t harm him and so we can complete any sort of routine.”
Delete Image
Align Left
Align Center
Align Right
Align Left
Align Center
Delete Heading