A Time to Transfer: Students Reflect on the Switch from Kalamazoo Central to Loy Norrix 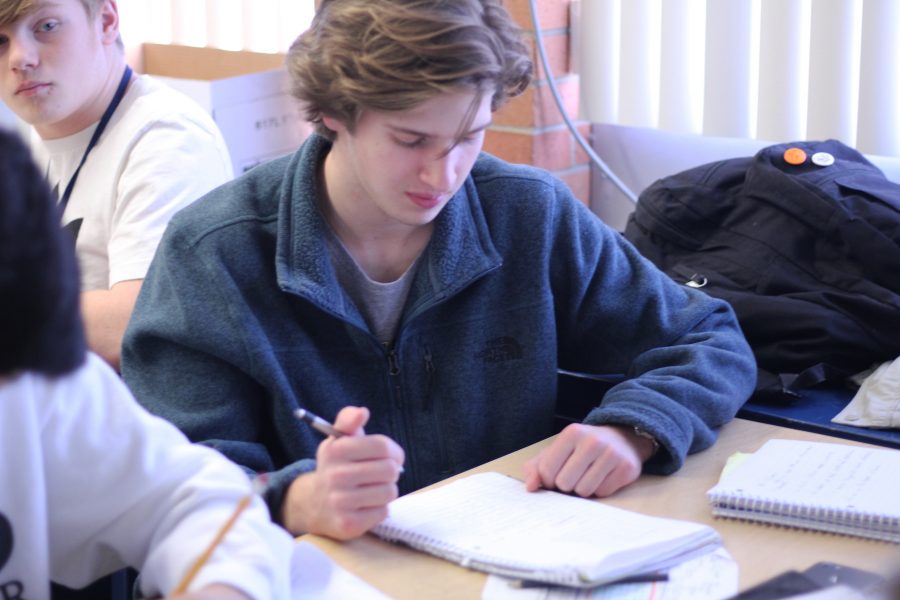 Sophomore Ben Sanford takes notes during Chemistry. Ben finds many of his classes here at Norrix enjoyable, especially when working with friends.

There has been a long history of student competition between Loy Norrix High School and Kalamazoo Central High School. Because of this rivalry, deciding on a high school to attend can be a very drawn-out decision and even results in students changing their minds midway through a school year. Students occasionally apply for a transfer during the first trimester of the school year in order to arrive at their new school during the second trimester.
A few of these students wanted to tell their story of why they switched to Loy Norrix and how the people of this school have treated them for the past few weeks.
Everyone has their own reasons for switching schools, but there is one very common one that most teens share: location.
“We moved over by Norrix, so that’s why we’re here now,” said sophomore Rebecca Sierra-Torres.
Both Rebecca and her freshman brother, Ben Sierra-Torres are new students to Norrix. After spending a year at Kalamazoo Central, they transferred to Norrix when they moved closer to Norrix.
Sophomore Ben Sanford is also a new student from Kalamazoo Central, but unlike the Sierra-Torres siblings, Sanford decided to transfer to Norrix because of the friends he has here and the friendly atmosphere.
“Most of my friends go here, so that’s one of the reasons I like it [being at Loy Norrix] better, and the environment is better,” explained Sanford.
Sophomore Thomas Cloutier is here for the same reasons as Sanford. Most of his friends from Maple Street Magnet School for the Arts now attend Norrix. Thomas decided to switch schools to be closer to his friends.
The new students have also noticed a lot of changes in the environment from Kalamazoo Central, mostly in their classes. All of the students compared classes in the two schools and have varying opinions about them.
“Here the classes are a lot harder,” said Sanford, “and the teachers push you a lot harder and expect more from you.”
“The classes over at KC are okay, but I feel more interactive over here at Loy Norrix,” said Torres, deep in thought. “It feels like a more real environment than over at KC.”

Meanwhile, Cloutier is more impressed by Central’s classes rather than those at Norrix. While he likes to be with his friends here at Norrix, he feels Central has a wider course selection than Norrix.
“I feel like they have more classes to offer at KC [but] I fit in more with the people here,” said Cloutier.
However, classes aren’t the only thing to be impressed by at Loy Norrix. As always, newcomers enjoy many aspects of Loy Norrix, whether it be the people of Norrix or the building itself.
“Everyone knows each other, everyone’s tied in with everyone,” said Sanford admirably, “There’s also not a lot of bullying going on, at least as far as I can tell.”
As for Torres, she was impressed much more by the staff than the classes.
“I feel able to interact with other people,” said Torres with a smile, “and I like that a lot.”
Despite the excitement of switching schools, the process can be very different for everyone.
“I just came here and I went to the office and got the registration form. I filled it out and was told I could transfer the next trimester,” explained Sanford, “It was pretty simple.”
Cloutier also had, as he would call it, a smooth experience while transferring schools. He simply had to fill out the registration form and then show up the next week for the first day at his new school.
As for Torres, the process was much more stressful.
“It [the process] was long. We wanted to enroll midway through the first trimester,” explained Torres. “We didn’t get a tour right when we asked for one, but we got one the first day I was here. It was overwhelming, but it was good.”
The feelings associated with switching schools can also be overwhelming. The students that have switched to Norrix have been on a rollercoaster of emotions since their arrival.
“I was skeptical [of Loy Norrix]. I had thought, thanks to the riots and stuff that we
heard over at KC, that Loy Norrix sounded like an unsafe school,” said Torres. “But now that I’m here, I’m happy and not as stressed out as I was.”
“I was excited,” said Sanford. “I like this school so far.”
As for other students transferring anywhere, there were a few words of advice given by our new students at Loy Norrix.
“Make some friends if you don’t have any there already, so you can fit in,” explained
Sanford. “Since you’ve transferred, you have to pay attention a lot more in class to get back involved and on the same track as everyone else.”
“Just jump into it,” said Cloutier. “You don’t have to be nervous about it. In the end of the day it will all work out.”
“Try to make friends so they can help you around the halls if you get lost,” said Torres
jokingly. “Don’t suck up to your teachers, but pay attention. Also, try to communicate with your counselor as much as possible.”
With such a diverse environment already at Loy Norrix, let us welcome these new members to our community with open arms and allow them a place in our home. No matter who they may be, let us show them the great school they have switched to.
Delete Image
Align Left
Align Center
Align Right
Align Left
Align Center
Delete Heading