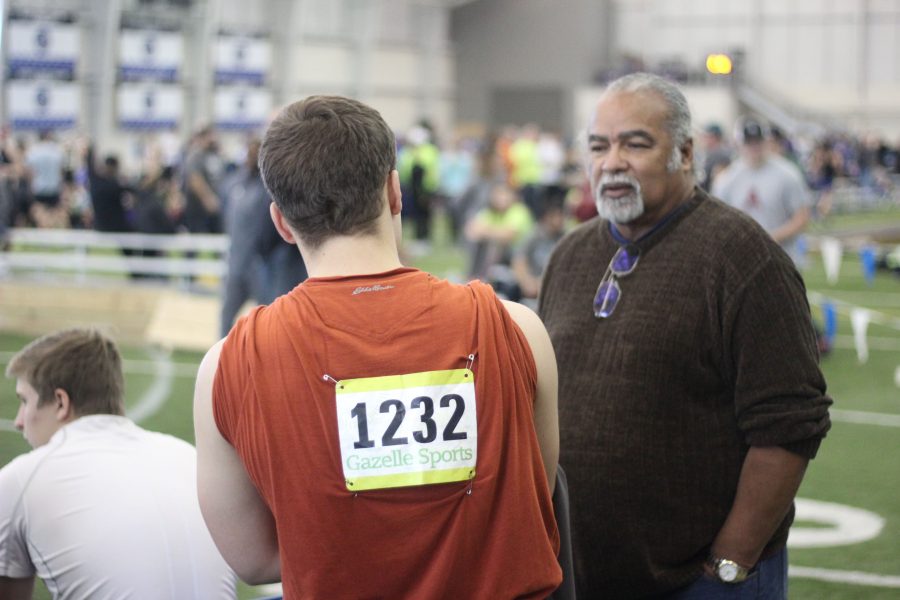 There’s some excitement in the air. It’s a Friday before an indoor track meet and the track and field athletes are nervous about how they will run the next day. It’s their first race of the season, and while it’s a low stress meet, everyone is anxious to see where they stand time and place wise.
When they asked for some racing advice, Coach Bradley Schmidt doled out his best advice, “Run fast, and turn left.”
Indoor track is the pre-season to outdoor track, which starts in mid March and goes until the end of May. Track and field runners run in a series of events that may include sprint races, relays, distance and mid-distance races. Examples of each of these include the 200 meter dash, the 3200 meter relay, 1600 meter run and 800 meter dash.
Indoor track athletes train before the official outdoor track season so they can start the outdoor season with months of training in their back pocket. Track athletes often start running at the end of November and train all the way up to March. Practices are optional but highly suggested. The earlier runners start training the better they are come outdoor season.
“Indoor track is a great way to bond with teammates and to build a base for the outdoor season,” said freshman Keegan “Delaware” Hughes.
At the January 13th GVSU meet Hughes raced a 2:28 800 meter run.
Practices vary depending on what event(s) an athlete is interested in. Those who throw shot put and discus mostly train in the weight room, along with the pole vaulters. Sprinters will run short distance workouts and mid to long distance athletes run both sprints and long mileage days.
Each workout starts with a short warm-up and stretching together as a team. Then the athletes do a series of good form running drills before their workout starts.
On Monday, Wednesday and Friday some members will hit the weight room after their run as well. After an athlete finishes their run, they’re allowed to go home, but the tight knit track community often stretches, lifts weight, or hangs out together afterwards.
To stay in the racing game, track members will often compete in indoor track meets during the winter. These are often held at colleges around the state such as Grand Valley State University and Aquinas College. Several of the athletes kicked off their indoor season at Grand Valley State University on January 6, and many will continue to travel to the various indoor races. Racing in a meet is also optional, but can have many benefits and be lots of fun. Plus, it’s a great way to see how your opponents are racing early in the season.
So far several indoor athletes have posted great start of season times in their events. Senior Abigail Dantes ran a 3:15.38 800 meter at GVSU on January 13th, only a couple seconds off of her 2017 season personal record (PR). Freshman Garrick Hohm raced a 5:26.94 minute 1600 meter so far this season. Zachary Skinner has unofficially broken the school record of 14’4” for pole vault in a practice. During that practice Skinner vaulted 14’5.25”. Junior Myles Baker has so far raced a 5:14.97 1600 meter run.

“Track is the sport I’m loyal to and [indoor track] has helped me to produce results,” said junior track athlete Bill Bowser. Bowser raced a 57.5 second 400 meter run, an excellent early season time, on the 13th.
Senior Fletcher Robbins and freshman Jacob Bowser have already set new personal records in the shot put. Robbins threw 39 ft and 8.5 inches, 7.5 inches further than his 2017 PR, and Bowser threw 27 ft. and 2.5 inches at GVSU on the 13th.
“[The PR] gives me a good point to jump from as the season starts,” said Robbins. “Showing me that I have the ability to push myself even further as the spring season comes.”

You can find the results of any Michigan indoor track meet and the schedule of meets at the Michigan Indoor Track Series (mits) website.
Indoor track meets are often smaller than the outdoor track meets and have fewer events. The events offered depend on what venue is hosting.
“The indoor meets are the top calibre of athletes competing,” said Bowser. “The guys you’ll have to worry about when the real track season comes around. By running indoor meets not only do you train, but you also learn the competition.”
Many colleges will host several meets each indoor season and rotate the events they offer at each meet. Generally each venue offers at least two or three short distance races, hurdles, a long distance race and relays. Field events include shot put, pole vault, long jump, high jump and, for indoor specifically, the weight throw.
If you’re thinking about running track in the spring, then come train with the indoor track members. Practices start right after school at 2:30 and will last until roughly 4:30. All the athletes meet up at 4 Corners after school, by 2:45, to warm-up and stretch together. After pre-run rituals are completed, each group, sprinters, distance and field events, all split up into their different workouts to either workout in the weight room, run through the halls of Norrix, or head outside on the roads or track.
Due to the variety of workout places it’s a good idea to bring clothes that will brave the outside weather and a set of clothes for running indoors. If you aren’t sure what event you’d like to run then spend some time running different workouts to determine what you’d like to race in come spring season.
“In indoor track it’s all about you,” said Coach Savicke. “Outdoor track is for all the marbles, teams are scored, medals may be won, [it’s] when you find what you’re made of.”
If you have any questions contact Coach Bradley Schmidt, Coach Duckett or Coach Savicke, or friends you may have that are already running. Coach Schmidt can be found in room B17 where he teaches math. Coach Duckett is one of Loy Norrix’s gym teachers and can be found by the gym. Coach Savicke can be contacted at 269-370-2704 or found at 4 Corners after school heading practice.