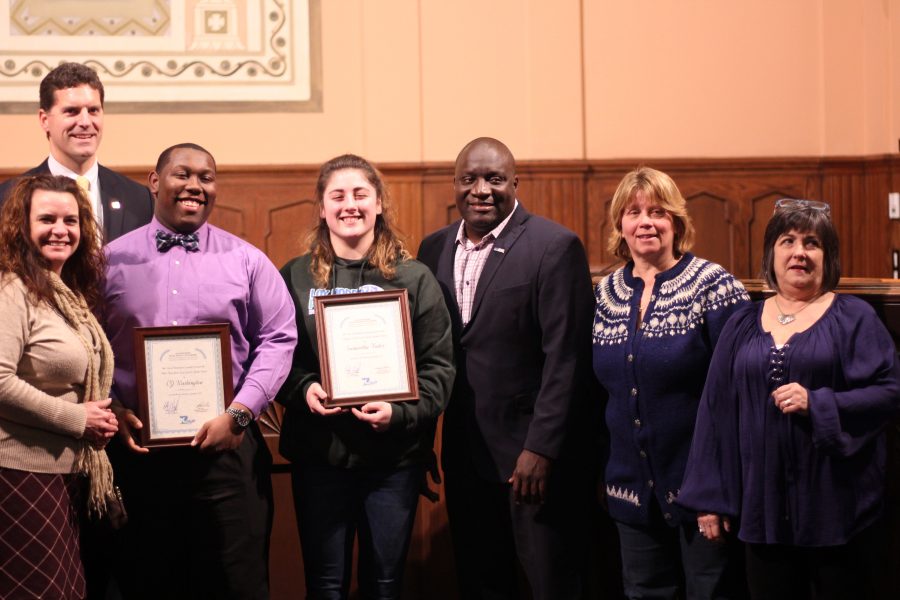 On a cold January night, in the tall, austere City Hall building of Kalamazoo, stood seven diverse, well-dressed teenagers, beaming as they held up their awards. Behind them sat Kalamazoo City Mayor, Bobby Hopewell, civil rights activist Dr. Lewis Walker and other Kalamazoo City Council members. In the front of the room sat friends, family and teachers, all proud of what the recipients have accomplished: being selected as one of this year’s Dr. Lewis Walker Social Justice Youth Award winners. Two of these winners, CJ Washington and Sam Fuller, are Loy Norrix seniors.
Each year, teachers are asked to nominate students, ages 12-19, to receive this award. Nominees should show strong community service, volunteerism and leadership. The board picks seven winners from the nominations, three that are sponsored by businesses in Kalamazoo, and one that is sponsored by Dr. Lewis Walker himself.
These awards honor the living Dr. Lewis Walker for the work he has done in the civil rights sector. Walker has written seven books about his studies in race relations and has walked with Dr. Martin Luther King Jr. during the Civil Rights Movement.
Sam Fuller was sponsored by Judy Woolsey at Schupan & Sons’ and CJ Washington was sponsored by Ronald P. Foor at Fifth Third Bank. These companies donate to allow three more youth to receive the Dr. Lewis Walker Social Justice Youth Award and the benefits that come with it.
For accomplishing such an achievement, each winner is given a community service award, a one year membership to the National Association for the Advancement of Colored People and $200.
For the past four years senior Sam Fuller has lived in an apartment bought and paid for by herself. Between balancing school and work, she spends her time volunteering with the Loy Norrix PeaceJam.
“I do pretty much everything at PeaceJam . . . reading to kids, painting pumpkins, sorting cans. That kind of stuff,” said Sam.
Sveri May, Loy Norrix teacher, PeaceJam leader, and Sam’s nominator, paints a picture of Sam that shows her selfless nature and humility.
“She has stayed to count coins for Coins for Cancer, taken time off from work to help with New Knights Day and the list goes on and on; three and a half years worth. Samantha Fuller was so deserving of receiving the Schupan part of the Lewis Walker Social Justice Award given by the City of Kalamazoo because she is giving, caring, loving and inspiring to all the come in contact with her,” said May
Through school and Peacejam, Sam and May have formed a special bond.
“I couldn’t have done it without Ms. May,” Sam said.

Life hasn’t always been good to senior CJ Washington. He previously attended Lakeshore High School in Stevensville, MI, which is 84 percent white. CJ, being an African-American male, certainly stood out. He experienced racism from his peers but hasn’t let that stop him.
“CJ Washington is not afraid to share his own stories to help others . . . sounds much like MLK himself,” said Ronald P. Foor, CJ’s sponsor, as he introduced CJ to the room.
CJ portrays the qualities of Dr. Lewis in the myriad of after-school programs he participates in. Football, Link Crew, DECA business club, yearbook, Stepping to Success, and KAPPA League, just to name a few.
Through these programs, CJ has worked closely with kids of all ages to inspire them to do well in school and stay on track to be successful in life. He shares his stories of hardships and explains how he’s learned from them.
“CJ Washington came directly to my mind when I read about this award in that he exemplifies what Dr. Lewis Walker stands for as an activist in civil rights through understanding our society. CJ is just that type of activist in his own world by working with and mentoring young people of all ages,” said Tisha Pankop, Loy Norrix English teacher and CJ’s nominator

Though their struggles in life are very different, both Sam and CJ have shown resilience in the face of adversity. Not only have they broken down their own barriers, but they are now spending every day helping others do the same.
The Dr. Lewis Walker Social Justice Youth Award is presented to seven teenagers every year that have demonstrated achievements in racial justice, community service, volunteerism and leadership. Sam and CJ go above and beyond these achievements and are prime recipients of this award.
Delete Image
Align Left
Align Center
Align Right
Align Left
Align Center
Delete Heading