Loy Norrix Students Walkout in Protest of US Gun Control 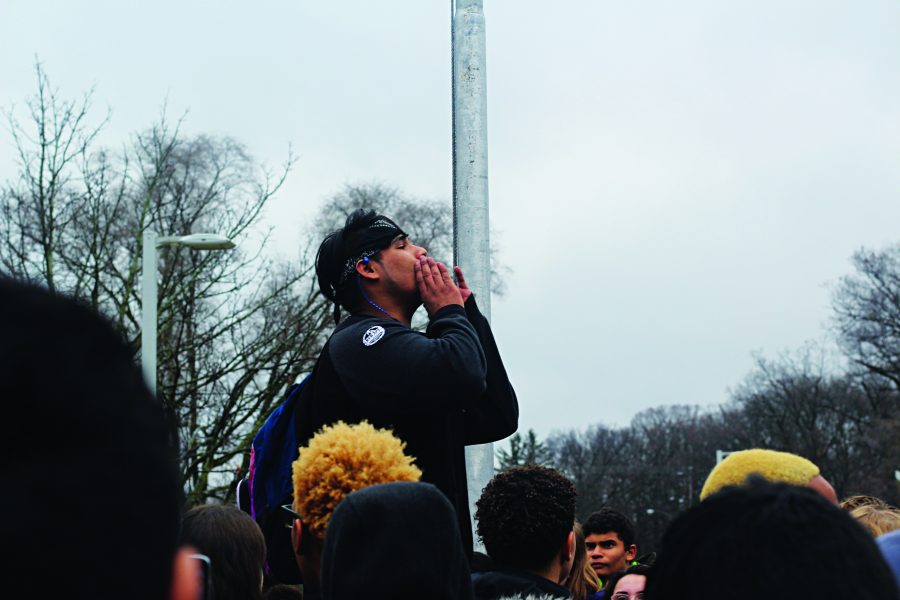 “We want to end gun violence in schools, to show that students have a voice, have opinion and want to be heard. We’re angry. We’re done accepting thoughts and condolences and we want something to change,” Emma Hilgarth-Griff shouted from atop a rock as she read her speech to the crowd of students around her.
Wednesday, February 21, hundreds of Loy Norrix students walked out of school in protest of lax gun laws in the US.
“[I’m here] To end the injustices to the mentally impaired and hopefully stop stuff like this from happening again,” said Aaron Self, LN junior.
In the wake of the Parkland, Florida, school shooting, students all over the nation are speaking out in favor of more strict gun legislation in the US.
“[I’m here because] I needed to do something. . . we shouldn’t let this go by just because this isn’t our school or our bodies. We care about what’s happening [gun violence] and are willing to make a stand,” said Stephanie Hoogerheide, LN junior.

“[I’m here] To support the change and protect kids in schools. . . we want change,” said Ethan Semelbauer, LN sophomore.
Loy Norrix Principal, Johnny Edwards, was occupied with monitoring student’s safety during the protest but was pleased to see students expressing their voices.
“Overall it went fairly well. It’s great to see them sharing what they believe and trying to make a change,” said Edwards. “I hope a positive message went across.”
As two more walkouts are planned, March 14th and April 20th, we’ll be seeing more of this in the future.
“This one was good, but the next one will be better organized,” said Stephanie Hoogerheide.

“I look forward to working with students to help shape what the future protests should look like,” said Edwards.