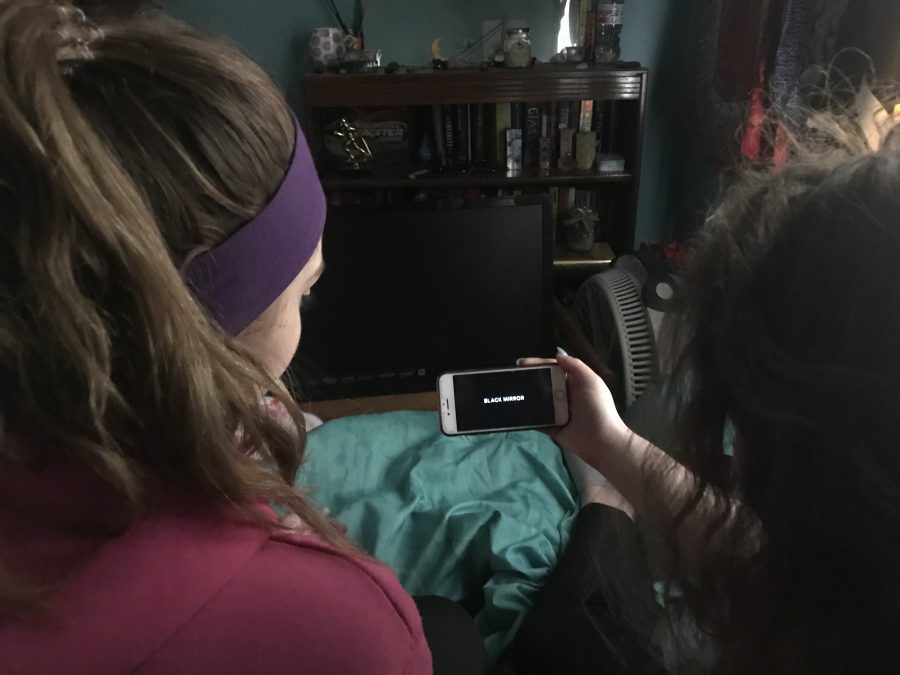 “It’s so interesting to see all these scenarios that could happen in the future with our use of technology,” senior Lauren Johnson said about the Netflix series “Black Mirror.”
“Black Mirror” was originally launched in December of 2011, on Britain’s Channel 4, but the popularity of the show was not as widespread until the release of season 3 and  just before season 4 came out.
The show is not as much of a series where the story continues chronologically from episode to episode with the same cast of characters, but rather each episode has its own story. There are also “Easter Eggs,” throughout the show. These include references to Netflix and binge watching, in the majority of episodes in the fourth season. Additionally, the episode “Black Museum” is connected to other episodes like “White Bear,” “Shut Up and Dance,” “Playtest” and others.
It’s widely believed that the name of the show refers to how people see themselves in the screens of their phones, computers and televisions when they have been turned off and turn into a black mirror.
Given the unique nature of the show’s format, it’s hard to describe the plot of the show, but it’s all based on how advancing technology can impact society in the future. Some episodes focus on technology from a military perspective, such as season 3, episode 5 “Men Against Fire,” which details a military technology that is used to help soldiers eliminate people who are deemed to have an inferior bloodline.
Others focus on technological connections to the brain and memory, such as season 4, episode 6 “Black Museum,” which is about different technologies used to alter and transfer consciousness, as well as episode 3 “The Entire History of You,” in the first season, which is about recording and playing back memories through eye lenses.
The first episode of the third season, “Nosedive,” is eerily relevant to modern day society. The premise of the episode is that the entire society is based on how high an individual is ranked, out of 5 stars. This is very similar to how people in society today use social media: it’s all about likes.
“I think we already have the kind of mindset in that episode,” said senior Addie Mielke, “and I think it should open some people’s mind[s] to where our society is headed with social media and our dependence on it.”
One of the scariest things about the show is that some of the ideas presented in “Black Mirror” are actually becoming reality. Pizza Hut just announced a collaboration with Toyota regarding a truck that could cook and deliver pizzas and is fully automated. The episode “Crocodile,” in the newest season of “Black Mirror” has a pizza truck that, after an accident, goes on a killing spree.
Scientists are also going to be developing eyepieces that can record someone’s entire life, just like the ones featured in “The Entire History of You.”
“I like that I can never expect anything. The endings and what happens always surprises me, so I never get bored when I watch it,” said Loy Norrix junior Emma Knutson.
“The show is very different than anything else you’ll find because of its realistic and sometimes sadistic take on the future of humankind,” said senior Henry Muscara.
Each person has their own views on why they like the show, and the show has achieved mass popularity, due to how unique it is. “Black Mirror” even received a 96% on Rotten Tomatoes.
“It’s currently my favorite show, and if you haven’t tried watching it you should,” said Knutson.
Delete Image
Align Left
Align Center
Align Right
Align Left
Align Center
Delete Heading