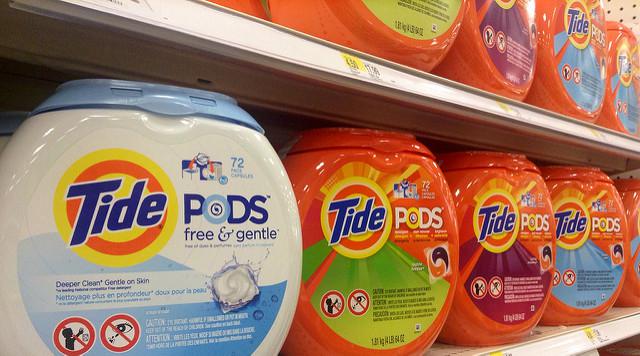 A Tide POD is a small, square shaped capsule of laundry detergent which is supposed to be used for none other than washing clothes.

The Tide POD Challenge, which has recently swept the internet in a craze, consists of teenagers sticking a Tide POD into their mouth, biting into it, spitting it out, and posting the video onto social media.

“I feel like people are taking a joke about it [Tide PODs] looking like candy a little too far with actually eating them,” said senior Tihnae Bennett.

This new trend has brought many stomach related illnesses. According to CNN, there have been 38 cases of intentional Tide POD ingestions in just the first 15 days of the new year. Since 2016, there have been just over 130 calls to the American Association of Poison Control Centers (AAPCC) regarding intentional exposure to laundry detergent packets.

Tide PODs are extremely toxic and can be very harmful to the body when consumed due to the fact their contents are a stronger, and more concentrated, form of laundry detergent .

“Just to let you know, don’t eat Tide PODs! I know they are the forbidden fruit and look delicious and all, but just don’t eat them,” said science teacher Daniel Houvener to his forensics science class in recent weeks.

If a Tide POD is put into the mouth it will initially taste bitter and may cause a wave a nausea because they are coated in Bitrex, a chemical substance that is meant to deter children from eating them. Once the outer film of the POD dissolves and erupts, it will start to cause mild irritation of the mouth. This will cause the person to cough or have some trouble breathing.

Most people who consume a Tide POD will take a deep breathe after it initially bursts. This can cause the liquid to travel down their throat and enter the lungs. Once the laundry detergent reaches the lungs it can lead to coughing, wheezing and respiratory distress.

If there are any other symptoms or they worsen you should immediately go to the Emergency Room and contact a poison control center.

When asked if he has eaten a Tide POD or would consider doing it, senior Jackson Couch responded, “No, I haven’t. I’m not an idiot.” He continued, “As far as I know, I don’t know of anyone who has eaten a Tide POD, but I wouldn’t be surprised if someone did.”

Tide PODs can pose a potential deadly threat, although a large amount of detergent would have to be consumed. Most of the deaths from exposure to this liquid detergent happens to children 5 years old or younger, according to cbsnews.

“I find the challenge to be ignorant in all honesty. It’s sad to see how people want to put something in their mouths that could poison them for the amusement of others,” said senior CJ Washington.

Amidst these health risks Tide released a statement on twitter stating “What should Tide PODs be used for? DOING LAUNDRY. Nothing else. Eating a Tide POD is a BAD IDEA.”

There have been rumors of Tide cancelling the Tide POD, but those rumor have yet to be confirmed by the company.