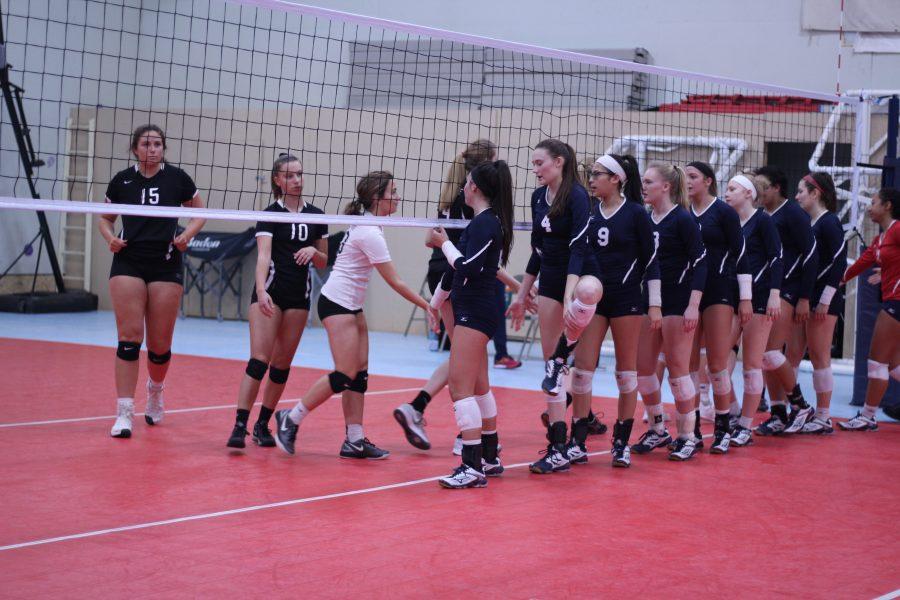 On February tenth 2018, USA Michigan defeated Lakeshore Elite with the final scores being 25-21 and 25-14. USA Michigan went undefeated this day at Inside Outs facility.

Many students at Loy Norrix play club sports in addition to playing school sports to stay in shape, advance their skills in that sport, build their skills as leaders and become well-rounded players overall. Club sports can be an outlet for emotions and a time to have fun, while working on skills and gaining new friendships with fellow teammates. Players are able to experience different coaching techniques and possibly be noticed by recruiters for the collegiate level.
Anna Buck Builds Skills on the Court
Freshman Anna Buck plays on the USA Michigan team and enjoys playing to advance her skills and technique for volleyball at Loy Norrix.
Anna said, “I play for USA Michigan volleyball, and I am currently playing on the three month team as libero. We train twice a week and play in tournaments every other weekend.” Anna continued, “We work on technique a lot, and that really helps me for when school season comes around.”
Andrew Roberts Takes on Club Baseball
Junior Andrew Roberts currently plays on the Michigan Rebels club baseball team and has played club baseball for seven years on five different teams. He recommends that athletes play club sports so that they can advance their skills mentally and physically and have fun traveling.
“Playing on a club team has definitely helped me to develop friendships and has helped me gain more knowledge about the game. I have formed a new perspective on baseball from different coaches, which helps me play better overall.” Roberts continued, “Even though you have to travel a lot and dedicate a lot of time to the sport, it’s worth it to see all of the different venues and make friends while getting better at baseball.”
Kalamazoo United Club Swim Team Prepares Swimmers For School Seasons
An underrecognized club sport is swimming. Many students from Loy Norrix are on the Kalamazoo United team, including sophomore Carly Loken. Carly has been on KU’s team for seven years and recommends that people play club sports to work on their skills and meet new people.
“I definitely think that it provides a really strong foundation for athletes coming into the high school programs, and it’s a great way to meet people from around the community. I’ve met some of my best friends there and created some great connections with younger and older athletes that I’ve learned from and been able to grow with, it’s been a great experience overall.” Carly continued, “During the summer we’re able to train and come into our high school season ready to transfer into the hardcore training, and it gives us a jump to the season and so we’re able to accomplish more things as the high school season progresses.”
Club Sports Shapes Lauren Into a Leader
Senior Lauren Johnson has played club softball for six years, on three different teams. She recommends that athletes play club sports so that they can experience a higher level of competition and to have fun.
“It’s cool to meet people from different schools and kinda learn how different their lives are compared to yours, and you make a lot of friends through club sports. The competition is better because there’s a lot of people at your same playing level and it’s been really fun.”
Lauren believes that playing club sports has significantly helped her with her school softball seasons.
“If I didn’t play club softball, I wouldn’t have been a captain, and I wouldn’t have been on varsity since freshman year,” said Lauren.
A common concern with playing club sports is the burnout from playing year round, and the growing possibility for an athlete to be injured. Although these are legitimate concerns, they can be avoided with proper resting time and wearing proper equipment during practices and games. Many people are opposed to playing club sports because they think that it can be too expensive, but many clubs offer fundraisers for their players to utilize to help them save money. Playing club sports involves lots of traveling, which can raise expenses quite a bit and becomes very time consuming.
In addition to all of the great benefits of playing club sports, the most important is that athletes get to play the sport that they love with great people. Club sports aren’t for everyone, but are recommended to those who want to build their skills while having fun with friends.