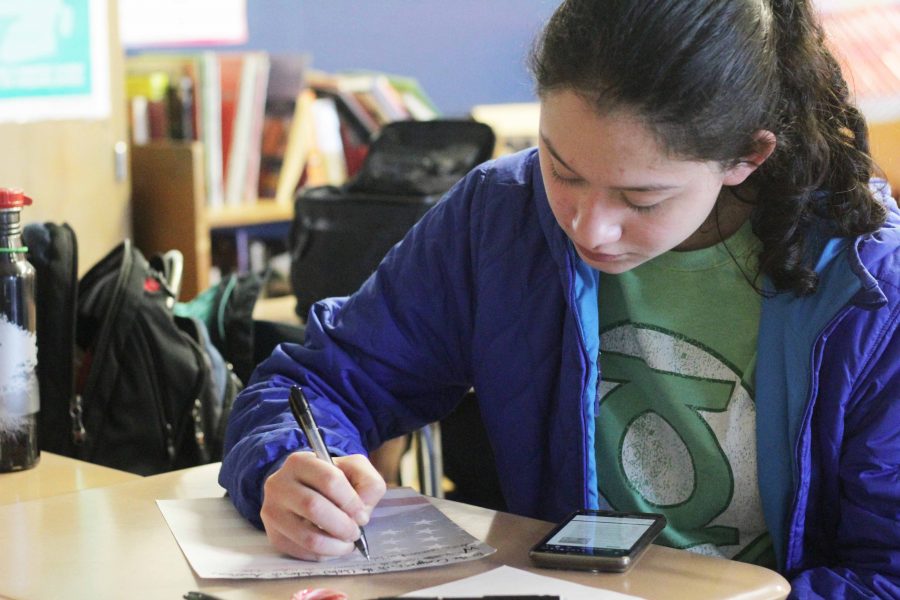 Junior Acacia Harper works on transcribing her letter onto American flag paper, provided by Ms. May. Harper planned to write asking for a limit on ammunition and a higher age limit for purchasing guns. Photo Credit / Grace Marshall

If you had stepped into Sarah Leineke’s classroom, located in the B-wing of Loy Norrix on Friday, March 2, you would have seen somewhere around 15 students sitting with laptops, paper and pens, writing letters to their Michigan representatives. The students were writing to express their discontent with the current laws regarding gun control legislation.
After the recent shooting at Marjory Stoneman Douglas High School in Parkland, Florida that left 17 dead, the topic of gun control has become the biggest subject of debate by the American people.
According to CNN, this was one of nine school shootings to occur in 2018, where someone, other than the shooter, has been shot. After Parkland, students began to speak out in protest of the current gun laws in the United States. Students are tired of living in fear going to school and are sick of losing classmates to needless violence.
In the words of Loy Norrix senior Tremor Evans, “I think that action on gun control should have been taken a long time ago.” Evans continued, “I’ve got little brothers and sisters who are going to be growing up in a world where they may or may not be safe because of the people who have guns.”
Students across the U.S. have participated in marches, rallies and walkouts. They have also taken the issue directly to lawmakers. Here at Loy Norrix, junior Beatrix Damashek, with the help of the Gender and Sexuality Alliance, organized a way for students to reach out to their representatives: letter writing.
“Being a student who’s currently enrolled in high school, seeing the things that happened in Florida made me really upset, so I decided to be productive and organize an event where we can solve the problem because I don’t think it’s okay that high schoolers live in fear of going to school,” said Damashek.
Damashek held the letter writing event in Leineke’s room after school. Among the students who came was junior Acacia Harper. Harper planned to write to both Michigan senators and congressmen about gun control related issues. Her primary focus was the different bills being introduced to Congress to ban bump stocks and to raise the age you must be to purchase a gun.
“You can’t rent a car, but you can buy a gun. That doesn’t sound right,” said Harper.
The age to rent a car ranges from 21 to 25. However, there are completely legal ways for an 18 year old to purchase a gun, such as the Brady Bill loophole that allows anyone to purchase a gun from a private seller so long as that seller has no reason to believe that the buyer isn’t allowed to own a gun.
Also among the letter writers was freshman Estrella Saavedra. Saavedra was calling for more action on gun laws and gun control.
“You have to know what you’re doing when you have a gun. I don’t think that certain people should have guns,” said Saavedra.
Students were not alone in their efforts; however, teachers also showed support for the letter writing campaign. Sveri May donated special paper for the students to use, and Spanish teacher Christina Holmes actually wrote her own letter to a representative. The Gender and Sexuality Alliance (GSA) club also helped support the event by providing stamps, and Leineke, the teacher advisor for the GSA, supplied students who were unsure about what to write with a template.
“We [the GSA] try to do a lot of community outreach beyond LGBT issues. We try to focus on other issues that are happening in the world,” said Damashek.
The letter writing campaign is not the only way that Loy Norrix students are protesting the lack of gun control. Some students have been working to organize an all school walk-out on March 14.
“If we let this issue drop for a day then it’s okay for another day, and then it’s a month, and then it’s a year, and then it’s forgotten,” said Harper. Students will continue to raise their voices until they witness substantial change in legislation.
Damashek said, “By empowering our students and working together, we can make a change.”