"A Little Shop of Horrors” Cast Delivers a Killer Performance 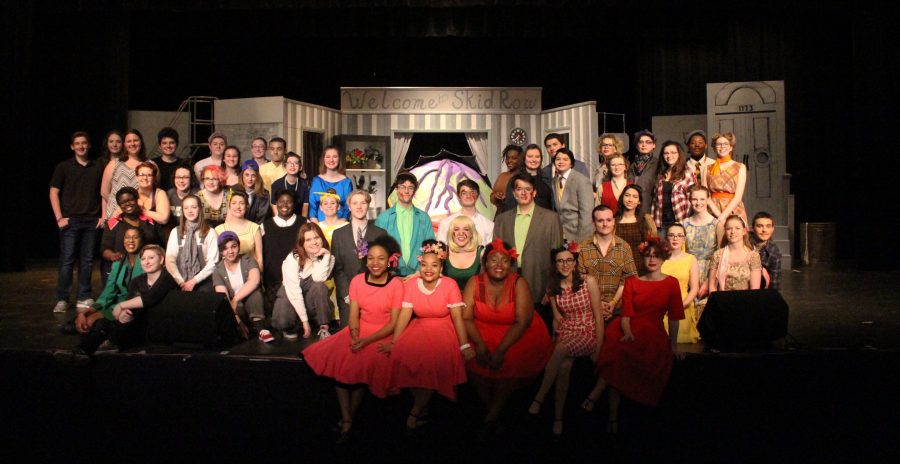 The lights dim, the curtains pull back, and one is transported to Skid Row, where lonely flower shop assistant Seymour, played by senior Victor Moss, gambles his chance for love and success on an obscure new plant which he names Audrey II, after his friend and crush, Audrey, played by senior Grace Erway.
While Audrey II brings him everything he has ever wanted, Seymour soon learns that it comes with a price. Based on the 1960’s film, Loy Norrix’s production of Howard Ashman’s “Little Shop of Horrors”  will make you laugh, cry, and leave you amazed at the amount of talent our school possesses.
From the moment this musical began I was taken aback. I have seen every musical at Norrix over the past four years and “Little Shop of Horrors” has been by far my favorite. It’s the perfect combination of quirky comedy and horror.
Senior Victor Moss has delivered as the lead role in multiple school productions over the past three years and can definitely be defined as Loy Norrix’s breakout theatrical star. However, every part Moss has ever played was put to shame by his portrayal of Seymour. It’s as if the role was written to accentuate all of Moss’s acting strengths. From Seymour’s original shy, complacent deposition at the beginning to his paranoid persona in the second act, Moss is able to capture the complexities and growing desperation of Seymour’s character.

At Moss’s side throughout this production is senior, Grace Erway, who plays Audrey, Seymour’s love interest who is also battling her own demons. Grace Erway is one of the most talented and humble individuals you will ever meet. Every time Erway sings, you are left breathless by the pure amount of raw aptitude and beauty in her voice. Her performance of “Suddenly, Seymour” was the absolute peak of the show and really showcased every aspect of her range of talent. Much like Moss, “Little Shop of Horrors”  is Erway’s best performance yet, and I can’t wait to see what the future holds for her.
Even Erway admitted, “This is my favorite show of the four shows I’ve done at Norrix.”
Once admirable aspect  about the Loy Norrix production of “Little Shop of Horrors” is how the cast and crew addressed the issue and presence of domestic violence in this musical. In the show, Erway’s character, Audrey, is emotionally and physically abused by her boyfriend Orin, played by senior Drew Strand. Prior to the production, director Paige Carrow informed the audience the a percentage of the ticket sales would be donated to our communities local YWCA to help women suffering from domestic violence. This was very inspiring and a great use of the platform.
While senior Drew Strand plays an abusive antagonist, he is anything but.
“It’s purely acting. It’s fun to play someone who’s mean, but it’s not fun to hit people.” Strand continued, “It’s nice to change from the cute little kid I always play,”
Having seen Strand play numerous one-dimensional, superficial characters it was extremely refreshing to see him in a more intricate role. Strand is able to make you simultaneously laugh and hate him all within the span of one song. Strand’s facial expressions and tone throughout the show captured the audience, even through a giant glass-like bubble mask. He was effortlessly able to capture the complexity of a character the audience loves to hate.

Loy Norrix’s “Little Shop of Horrors” heavily consists of and is lead by seniors. Nevertheless, the theatre department has little to fear once the seniors graduate. Sophomore Ella Ledbetter-Newton is a rising star in the Loy Norrix Theater department. Her voice in “Skid Row (Downtown)” will leave you in awe. Ledbetter-Newton’s voice filled the room and is just so whole and pure.
Junior Chris Aranda also gave an amazing and very professional performance. Aranda has an incredible ability to perform at a high maturity level that allows him to take on roles well beyond his years.
Furthermore, freshman Harmony Holt is a performer that will really be blossoming into a true master of her craft in the up-and-coming years. “Little Shop of Horrors” is Holt’s first theatrical production ever, however, you would never guess. Holt has this beautiful, soulful voice that really comes alive on stage. She can only really be described as fame in the making. Holt’s solo at the beginning of “Finale Ultimo (“Don’t Feed the Plants”)” left the audience stunned at how much raw talent and potential she possesses.

“There are a lot of great people with experience. Being a freshman, I really didn’t think I would get [such] a good part,” said Holt.
Lastly, this show wouldn’t have been complete without the sophomore Katie Grey and seniors Ava Stoops and Griffin Abbott as Audrey II. Stoops and Abbott are seamlessly able to synchronize the movements of the puppet to Grey’s show-stopping voice. However, while Grey’s voice is truly heart-stopping, it was quite hard to hear and understand the lyrics throughout the production due to how loud the instrumentals where.
Everything about “Little Shop of Horrors,” from the cast to the set to the costumes, really brought the Loy Norrix theatre department to a whole new level this year. The set was beautifully crafted and fluidly able to transition from scene to scene. The supporting cast also really helped the show come alive in the best way possible.
“This is the ideal show to showcase our seniors’ talent and end our year strong. The cast and crew is amazing and brings justice to the script,” said director Paige Carrow.
If you haven’t had the chance to see “Little Shop of Horrors” yet, there will still be two more shows on April 20th and 21st at 7 p.m. in Kasdorf Auditorium. Tickets are only $12, $10 for students and seniors. I assure you, you won’t want to miss it.