"Fortnite" Storms Over the Nation 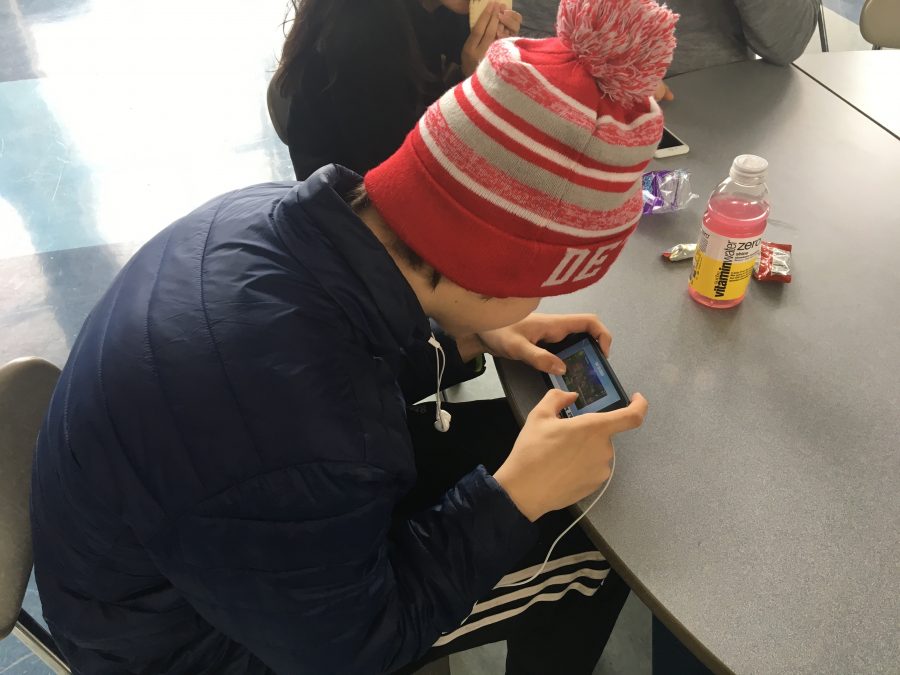 Sophomore Jacob VanHorne fits in a game of “Fortnite” before his lunch is over. VanHorne, among many others, plays “Fortnite” during school. Photo Credit / Maxwell Link

“Fortnite,” the magical land full of violence, sacrifices and victory was released on July 24, 2017. Since the release, it has stormed across the world as the best new thing to come out in the video game world with more than 40 million people having downloaded the game.
Whether it’s on Xbox, Playstation, or PC anyone can play “Fortnite” all thanks to Epic Games and People Can Fly, who teamed up to create the “Gears of War” series.
The big talk around Loy Norrix is who won what battle and who had a better “sweet 360 no scope.” In the game there are two different game modes which are Battle Royale which is free for everyone who has a Live pass, and Save the World which costs money to play. A Live pass is a pass for gaming so that you can talk to friends and play online with people round the world. For Save the World, you have to buy on the app store for the price of $39.99.
“My favorite part of Fortnite is the rush that you get when you run up on Boagies [enemies] and it either goes one of two ways, you die or you kill. The best feature of the game is building. It creates another level difficulty and can help you win in a strategic way. I have over fifty wins in Battle Royale weather its squads, duos, or solo,” said junior Wyatt Atkins.
In Battle Royale you start on a flying bus with 99 other players and you jump out and dive to the place you want to start. The object of this game is to be the last one standing while finding different weapons, hidden chests full of loot and materials so you can build your way up a mountain or to find cover in case of enemy fire. You can also play with friends online whether it’s with one other person (duo’s) or three other people (squads).
Save the World is all about exploration, crafting weapons, scavenging items, building sacred structures and fighting off different waves of terrifying monsters. The purpose of this game is to uncover all of the map while finding the atlases to build structures to help you defeat the waves.
“Fortnite is my all time favorite game. During winter break I stayed up three days in a row playing non stop only eating hot pockets and drinking Red Bull,” said Atkins.
Fortnite is now on season three with new skins (outfits), guns and new cities within the map. You can buy the battle pass for $9.99 so every time you level-up, you can unlock new characters and different dance moves.
With one click of the upper D Pad you have the ability to dance. The dancing adds a little something different to the game. It adds the ability to be disrespectful to your enemy or to make a life-time friendship. Some of the dance moves include the dab, the worm, the electro shuffle or the slow clap.
Recently “Fortnite” has come out with a mobile app for iPhone and has future plans for Android. They have made it available to play for people who don’t have a game system. Another update to the game is how you can cross play with PC and Xbox.
Epic Games has added a new level of fun to video games that will make you want to stay by your console for days.