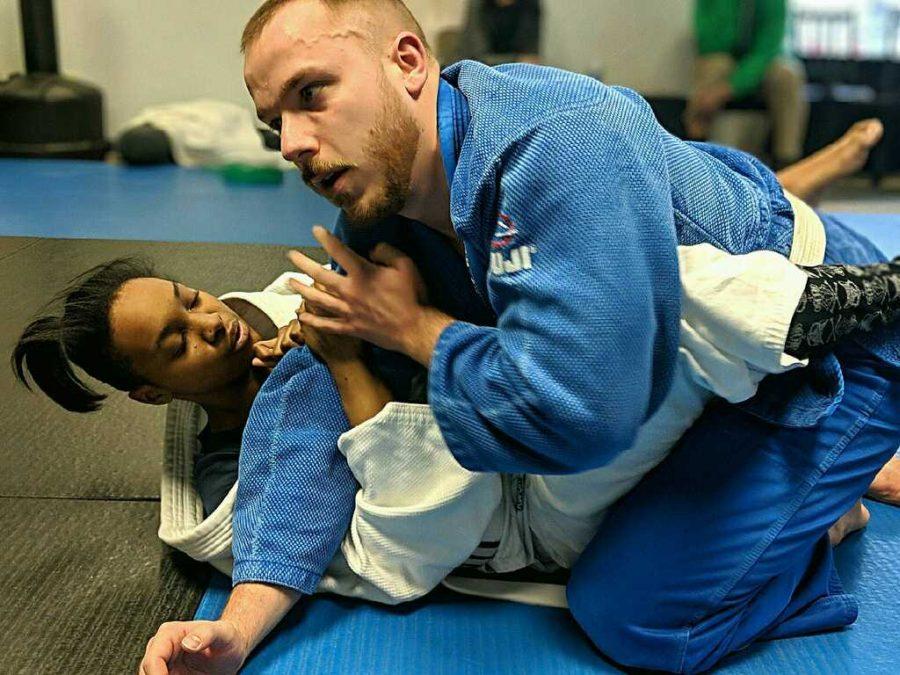 Looking into South side Dojo, a surprising sight meets the eye. A five foot nothing individual, who might seem a lot younger than she actually is, facing off against her much larger opponent. Suddenly, the smaller opponent moves. With quick efficient movements, she takes him down. A thud resounds as he hits the mat. The little warrior stands tall over her defeated foe.

This individual is Loy Norrix senior Nyla Baker. Baker has been participating in martial arts since the first grade.

“My dad got me into it because I was the smallest person in my age group,” Baker said, “He wanted me to have confidence.”

Watching Baker on the mat is a sight to behold, she utterly dominates.

“The strategy of it is sweet. It’s a chess game, it’s a mind game. It’s so strategic, it’s so much fun.” Baker continued, “I’m a competitive person, I like that challenge.”

“My favorite is the jiu jitsu,” said Baker, “but that’s probably just because it’s the newest, it’s like a new toy to play with.”

Baker has only recently begun to participate in tournaments for martial arts, but that doesn’t stop her from utterly crushing the competition. She has managed to place in the top five of every competition she has participated in.

In addition to participating in these martial art disciplines, Baker also teaches karate and kobudo at South side Dojo.

“For a while I was the only black belt that was there, and we had a bunch of new kids and no one to teach them,” said Baker, “so I kinda got thrown into the deep end.”

When asked what she likes most about teaching the incoming students Baker replied, “They’re funny, and when they get something and you are the one that taught them? That’s so rewarding.”
In addition to martial arts, Baker also participates in pool tournaments.

“One of my dad’s friends got him into pool, which got me into it, and I’m really competitive, so that’s why I started really doing tournaments,” said Baker.

Baker competes in pool mostly in a team with her dad, but she also competes on a junior league team and sometimes competes solo.

“I like doing it solo best,” Baker said. “I like to be in charge of myself, and I don’t have to listen to people trying to tell me the best strategy, nor am I relying on other people performing well.”

When asked what she likes best about curling Baker replied, “It’s a new challenge, and it’s also really a lot like pool. And also, again, I just really like the competition.”

In response to what sport is her favorite Baker said, “Martial arts is for sure my favorite; I’ve been doing it since I was five. Pool is the most challenging, it’s a whole different mind game, but I find that all of the sports I play are like a chess game. You have to think four steps ahead of your opponent and that’s what really draws me to those sports.” She continued, “I have no idea why I’m so competitive. I have to be the best, and I will go through anybody to prove that.”