Kalamazoo Then and Now 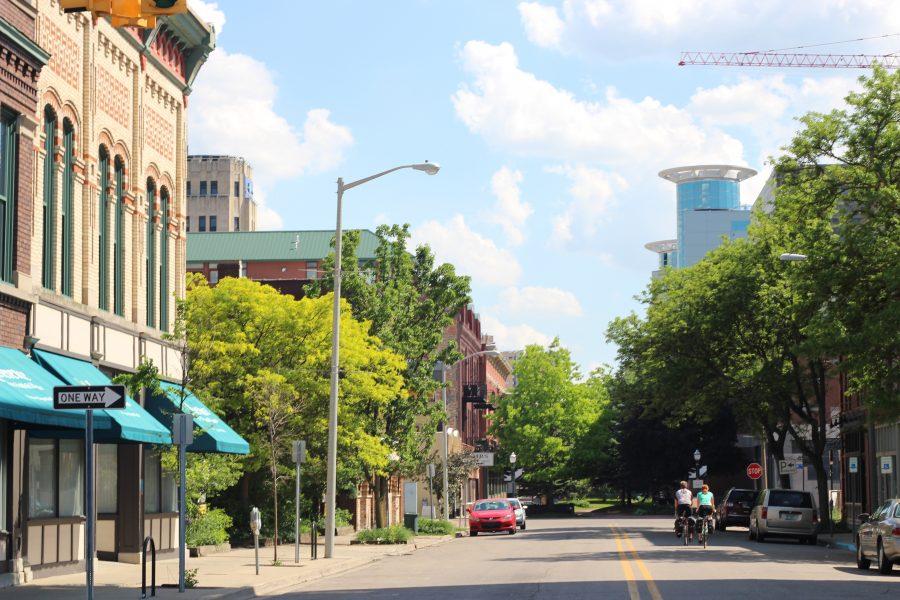 By Raili Nelson and Lilly MacInnis

Founded on May 7th, 1830, Kalamazoo, Michigan has cultivated a rich history since the beginning. Over Kalamazoo’s 188 year story, the people, the culture, and the city have changed. Originally having a population of around 7000 in 1846, Kalamazoo now houses over 75,000 citizens. This increase in people has affected all aspects of Kalamazoo, from the culture, to the physical landscape of the city.
While many things have been changed since Kalamazoo’s start, many things have also been added, promoting the growth of the city. From the Kalamazoo Promise to Kalamazoo’s significant interest in the arts, the city has grown around its people in a special way. The city now provides a home to numerous festivals, such as the Gilmore Piano Festival and Art Hop, the Air Zoo Aerospace & Science Museum, the Kalamazoo Institute of the Arts, and the Kalamazoo Valley Museum.
Kalamazoo’s physical landscape has developed and changed to accommodate these additions and many more. Buildings have been raised and demolished or have changed their use as the town itself has developed. The following photos illustrate the ways Kalamazoo has morphed over its illustrious history.

Kalamazoo’s Outdoor Mall, located on a section of Burdick Street, has a significant history. The project was the first outdoor mall in the country, and was opened in 1959. The streets were closed until 1998, when two of the mall’s four blocks were reopened for one way auto traffic. It is pictured here in 1960, one year after its inception.

South Burdick street has always been the epicenter of Kalamazoo. Here it is in 1914. Trolley cars roll on tracks in the center of the brick street and people ride their horse-drawn carriages to peruse the shops. Nowadays, the street is paved in hard black asphalt, devoid of trolley tracks, instead featuring the bright lane lines pictured in the photo above. Some of the old buildings still stand, but the street is now characterized by high rises like the Radisson Hotel and the Fifth Third Banking building.

Located in Bronson Park, the picture of the fountain of Pioneers above was taken in 1940. The fountain was originally completed in 1927 and then revised and rebuilt in 1939. The fountain has come under controversy for its depiction of a Native American kneeling before a settler. As of April 2018, the fountain was put in storage.

Built in 1946, this sculpture commemorates the Kalamazoo veterans from the Spanish war. The “Hiker” as its called, is not unique to Kalamazoo, with around 100 copies located around the United States, used for the same purpose. Since this photo was taken the statue has moved to rest on a large boulder, but the message remains the same.

This is the view of East Michigan Avenue in 1950. The iconic 1950s Checker Cab that’s visible in the center of the road was probably manufactured right here in Kalamazoo. The first cabs made in Kalamazoo were manufactured in 1923. After a rich history of operation in Kalamazoo, the Checker Cab company stopped production of cars, being unable to compete financially. The last checkered cab rolled of the assembly line on July 12, 1982.

Built in 1887, the Michigan Central Railroad Depot, now called the Kalamazoo Transportation Center, provided a needed stop on travelers way to Detroit and Chicago for many years. The city of Kalamazoo bought the depot sometime after this photo was taken in 1895. It now still serves as an influx for all types of transportation.

Constructed for a theater group called The Civic Players in 1931, the Civic Auditorium has always been a staple of Kalamazoo culture. The theater in many ways has stayed the same, serving the people of this city with amazing shows. The theater also has remained very similar in its construction looking the same as it did back when this photo was taken somewhere between 1931 and 1934.

Pictured here in 1920, this is the building that once housed Kalamazoo’s first high school, Kalamazoo Central High School from 1912 to 1972. The building currently houses the Kalamazoo Area Math and Science Center, the Community Education Center, and Chenery Auditorium.