Loy Norrix Freshman Thinks Back on His Time in America 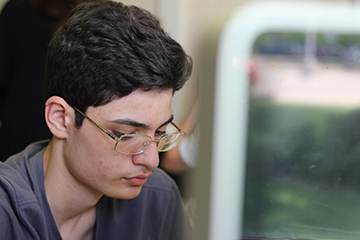 “That was the first time I’d ever seen a plane,” said Loy Norrix ninth grader Ali Al-Moukhles. Al-Moukhles’ first plane ride was his ride to America roughly six years ago so that his father could continue working on his doctorate at Western Michigan University. He only vaguely remembers the plane ride itself, seeing as it was so long ago. Al-Moukhles mainly recalls how long he stayed awake and how the games he played kept him entertained enough to get through the nearly sixteen-hour flight.
“I remember there were computer games on there. I don’t remember much besides not sleeping, time zones and all,” said Al-Moukhles.
Ali isn’t the only child to be displaced by his family’s immigration to the U.S. Many children arrive here as refugees as well as immigrants. Since 2008 there has been an increase in immigration from Middle Eastern countries. Immigrants all have different reasons for leaving. According to Michael Nicholson’s article, “The Facts on Immigration Today: 2017 Edition” from the Center for American Progress, “The number of foreign-born individuals in the U.S. population has more than quadrupled since 1965 and is expected to reach 78 million by 2065. At just 9.6 million in 1965, foreign-born individuals represented 5 percent of the U.S. population. By 2015, immigrants made up 13.5 percent of the total U.S. population. Still, today’s share of the immigrant population as a percentage of the total U.S. population remains below its peak in 1890, when 14.8 percent of the U.S. population had immigrated to the country.”
Many immigrate to further their education similar to Al-Moukhles’ father. But when the parents come here to learn, so do the kids.
“Learning English took me about a year,” said Al-Moukhles in reference to challenges he faced coming to America at age nine.
It took Ali another two years to get a grip on English grammar. But this is a common situation for immigrant children. According to Aaron Terrazas’ article, “Iraqi Immigrants in the United States”  from the Migration Policy Institute, only 8.7 percent of Iraqi immigrants over the age of five spoke “English only” while 44.2 percent of them reported speaking English “very well” in 2007.
Other challenges, like discrimination, are also faced by immigrant children. Ali said the discrimination or bullying he dealt with didn’t get bad until 7th or 8th grade. “That’s when they started calling me a terrorist,” said Al-Moukhles.
Many kids like Ali face similar troubles, some struggle with staying out of trouble. When Ali was in 6th grade, he found himself in trouble throughout the year and at one point Ali got into a conflict with his bus driver who kept skipping his stop. Al-Moukhles said, “I got many referrals in my 6th grade year. One of them was because I threw my backpack out of the bus window.”
An article from Princeton University by Ruth Stevens, “Children of Recent Immigrants Face Many Challenges,” sums it up pretty well, “When parents have low levels of education, they are poor, and they have been subject to high levels of discrimination, then there may be problems in terms of how the children assimilate.”
Discrimination can be faced in classroom bullying, poor reception, and prejudice. It’s no secret that some Americans are not open to immigrants, a trend that has existed since the creation of America. Through the 1800s nativism raged through the conservative side of America targeting the Germans and Irish, through the 1850s the Chinese joined the group. Discrimination and racism is nothing new in American history but immigrants maintain hope even in the face of anger at their existence and discrimination.
Delete Image
Align Left
Align Center
Align Right
Align Left
Align Center
Delete Heading